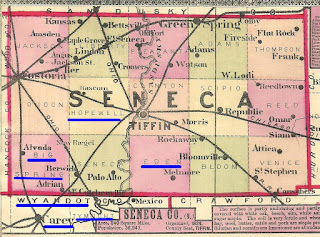 The Barnhiser family lived in various Seneca County townships.  The final one where there is a record, is the 1850 Ohio census.

1850 Ohio Federal Census taken on September 3, 1850
Big Spring Township, Seneca County, Ohio
This census lists John Andrew as age 7 and attending school.  His two older sisters, Mary Barnhiser and Sarah Ann Barnhiser married and are beginning their own families.
Somehow the 1860 Ohio census enumerator missed the Barnhiser family.  A biographer writes that the family removed to the village of Carey in Wyandot County, Ohio around 1864.  The map shown above gives an idea of the family's travel from Big Spring Township in Seneca County south to Carey in Wyandot County. 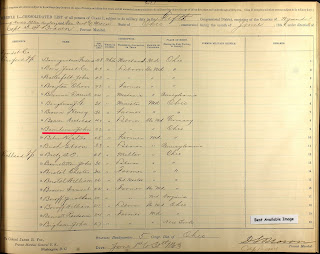 In June 1863, there was an enumeration of men subject to do military duty in the Civil War.  John Barnhiser, age 22 is on the list.  He is living in Crawford Township, Wyandot County, Ohio, is a laborer and unmarried.

John did serve the union in the Civil War as a private with Company D 144th Infantry of the Ohio Volunteer Army from May 2, 1864 to August 31, 1864.  According to the regiments history, the service was one hundred days.  He mustered in and out at Camp Chase, Columbus, Ohio. 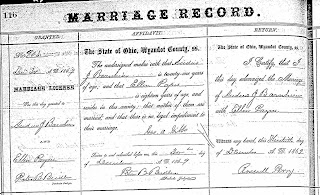 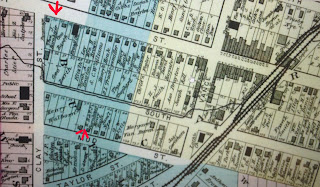 A 1879 map of Carey has arrows marking the Barnhiser properties.  The arrow pointing to the house and property on the north side of Mud Street was purchased by John Barnhiser circa 1864.  He died in 1877 and the property passed to his two sons, Thomas and William.

1870 Ohio Federal Census taken on July 19, 1870
Town of Carey, Wyandot County, Ohio
The newly weds are living with the Barnhiser family in their house located on Mud Street, Carey, Ohio.  John, age 27, is employed as a laborer with the railroad.  His wife, Ellen, age 19, is keeping house.
Also in the house are three of John's brothers, William, George and Frank, all employed with the railroad.  The tracks running through the town of Carey are the Cincinnati, Sandusky and Cleveland Railroad.

John and Ellen welcomed a baby daughter, Belle Barnhiser, on March 31, 1871.  She was born in Carey, Wyandot County, Ohio.

A little over a month after his daughter, Belle, was born, John Barnhiser, age 27, died of brain fever on May 5, 1871, probably in the family house on Mud Street, Carey, Wyandot County, Ohio.  Brain fever in the 1800's was said to be caused by a severe emotional upset that brought on a fever and life threatening illness. 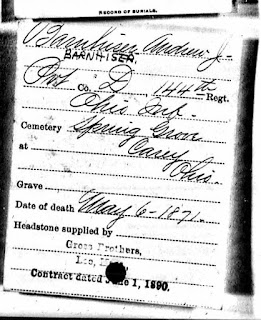 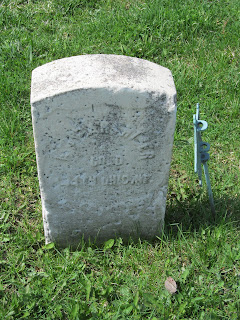 Taken from the Find A Grave website
The grave marker for Andrew John Barnhiser was placed over his burial site in Spring Grove Cemetery, Carey, Wyandot County, Ohio on June 1, 1890. 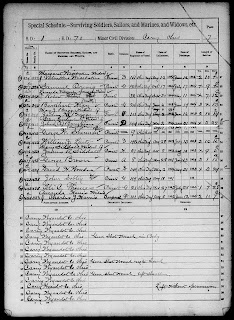 In 1890 there was a Special Schedule for Surviving Soldiers, Sailors, and Marines and Widows.  The enumeration for Carey, Wyandot County, Ohio included John A. Barnhiser.  His widow, Ellen Lindenbeck, is the widow.
After Andrew John Barnhiser's death

On May 11, 1873 Ellen Barnhiser married John Lindenbeck in Hardin County, Ohio.  By 1880, the Linderbeck's were living in the town of Carey, Wyandot County.  Ellen's daughter, Bell Barnhiser is enumerated with her mother and the blended family on the 1880 census report.  Ellen died on December 11, 1913 in Toledo, Lucas County, Ohio.

Belle Barnhiser married first Unknown McCleary.  On August 16, 1916, in Michigan, she married John D. O'Day.  The marriage only lasted several years.  Belle decided to go back to her first married name and is found on the 1930 and 1940 census in Findlay, Ohio listed as Belle McCleary.  She died in March 1942.

Ellen listed on the 1910 census that she was the mother of six children and five were alive.