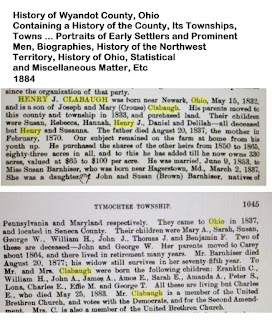 Using the biography shown above as a framework for research, I cropped from the Muskingum County, Ohio marriage record book the record for Mary Crouse and Joseph Clabaugh.  They were joined in marriage on August 7, 1823 by Smith Gooden, M.G.

Off and running.  There are numerous records for Joseph Clabaugh showing his land ownership in Bowling Green Township, Licking County, Ohio.  The earliest is 1826.  Since I cut and pasted his record, I filled in the areas where there were quotation marks down the page.  If I'm reading the record correctly--he owned 2 horses valued at 80, 2 cattle valued at 16.  He paid his fair share on canal, road, school and county taxes.
Again, using the biography, the names of the children born to Joseph and Mary Clabaugh were:
Perhaps there were one or two additional children born to Joseph and Mary who died early and their names forgotten by 1884 when the biography was written.  I find it difficult to believe that there was five years between their marriage in 1823 and the birth of their first child in 1828.  Additionally, all children were deceased by 1884 except Henry and his sister, Susannah.  I have not been able to trace Rebecca, Hannah or Delilah.

It is important to mention, there is a census record for an Isaac Clabaugh in the same township, Bowling Green, as Joseph Clabaugh dated 1820. Perhaps a brother to Joseph? Isaac's age then was between 16-26 (1794-1804). He was married and had a young son. It is known from Joseph's burial maker that he was born circa 1801. Researching Issac, he stayed in Licking County and removed to Union Township, Hancock County, Ohio circa 1835. He was a prominent member of the Hancock County community and his biography was featured in the 1886 Beers History of Hancock County, Ohio.
Checking Find A Grave, Isaac Clabaugh and his father Henry Clabaugh and their wives are all buried Clymer Cemetery, Mount Cory, Hancock County, Ohio. One son to Henry and Rebecca Clabaugh, who is linked on Find A Grave, is Henry Clabaugh.  According to the information for him, he is the same man who has a marriage record in Tymochtee Township, Wyandot County, Ohio in 1823.  It appears the Joseph Clabaugh was following in his father and brother's footsteps from county township to county township.  Perhaps due to his early death in 1837, he did not also remove to Hancock County.
Going out on a limb here, I think various land, history, marriage and census records lead me to believe that the subject of this blog, Joseph Clabaugh, is the son of Henry and Rebecca Miller Clabaugh.
Working to fill in the children of Henry Clabaugh and Rebecca Miller Clabaugh.  I'm sure there are others.

1837 Tymochtee Tax Record
Joseph and Henry Clabaugh are both land owners in Tymochtee Township on 1835, 1836 and 1837 land records. Joseph owned one 80 acre piece of property during those years. Henry owned several pieces of property in 1835; one 80 acres, another 80 acres and one 10 acres. In 1836 he sold one of his 80 acre pieces.  Henry Clabaugh and his family removed to Illinois, where he died in 1859. 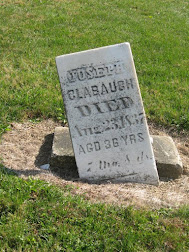 The biography of Henry J. Clabaugh, gives the date of August 20, 1837 as the date his father, Joseph Clabaugh died at age 36.  Joseph is buried at Bibler Cemetery, Tymochtee Township, Wyandot County, Ohio.  The marker lists August 23, 1837 as the date of death.  The Clabaugh children were all under age ten when their father died.

On July 28, 1839, Mary Clabaugh, Joseph's widow, married William S. Nafus in Crawford County, Ohio.  William was born about 1773 in New York.  She may have been able to hold on to the farm land; however, none of her children were old enough to be of much assistance.  Frankly, for widowed women in the 1800's, marriage was the only option.

1860 Ohio Federal Census taken on June 8, 1860
Tymochtee Township, Wyandot County
What a difficult read.  I spent time going page by page through the township census.  I was actually looking for Henry J. Clabaugh and family.  Instead found his brother, Daniel Clabaugh.
Daniel Clabaugh, age 25,  born in Ohio.  A farmer with $7,000 in real estate and $600 in personal estate.
Susannah, age 21, born in Ohio and working in the home.
Eliza, age 2 and born in Ohio
Mary, age 55
Although Susannah's mother was also Mary, she died in 1836.  I think this could be Daniel's mother, Mary Crouse Clabaugh Nafus, now a widow for a second time.
I have no death record or burial place for either William S. Nafus or Mary Crouse Clabaugh Nafus.  From various family biographies, she died in August 1870.  She probably died and is buried in Tymochtee Township. 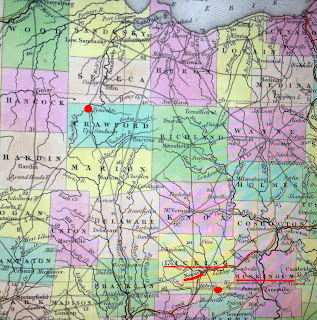 This 1840 map shows the movement of Joseph and Mary Clouse Clabaugh.  They were married in Muskingum County in 1823.  The circular mark in Licking County is in Bowling Green Township where Joseph owned property.  Tax records begin in 1826-1832.  Next and final records are in Wyandot County, Tymochtee Township from 1834 onward.  Wyandot was formed partially from Crawford County in 1845, so on this map I have a red circular mark on the village of Tymochte which is in Tymochtee Township, Wyandot County.
*I want to acknowledge and thank a descendant of this family for filling in marriage information for Rebecca Clabaugh and Delilah Clabaugh.