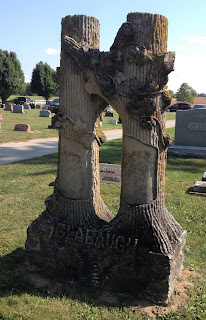 Clabaugh Memorial Marker
Pleasant Ridge Cemetery
Tymochtee Township, Wyandot County, Ohio
It has been awhile since I took the time to walk a cemetery looking for one of my favorite styles of grave markers--the tree trunk.  This past weekend I was at Pleasant Ridge Cemetery for a funeral service.  I spied the double trunk marker and had to visit it when the service was over.
I think one of the first tree trunk marker I blogged about was over a decade ago when I was researching one of my Stories in Stone pieces.  To add to any story, I like to post additional photos of the the owner of the story in stone building ie the house they lived in at the time, their final resting place, any newspaper articles, etc.  Near the marker I was photographing was a tree trunk marker.  This particular one had a Woodsmen of the World symbol on it and a metal Woodsman of the World (WOW) metal marker.  I was able to find an informative article about this organization by Stephanie Lincecum.
The Clabaugh marker was not paid for by the Woodsmen of the World.  Not all tree trunk markers are.  Some relations simply want to memorialize their loved ones with a special marker.  A replica of the tree of life is certainly a good choice.  This was a particularly wonderful find as it is the first double trunk one I have ever seen. 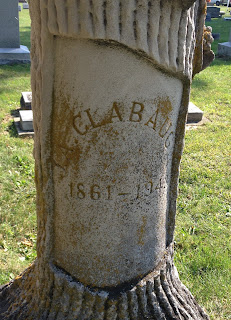 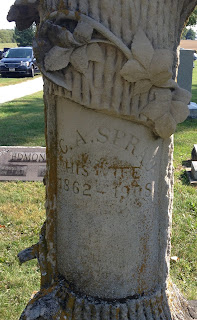 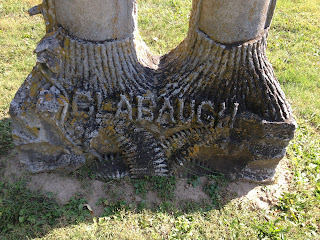 The tombstone is the memorial marker for James Albert Clabaugh and his first wife, Catherine Anna Sprau Clabaugh.  James is the son of Henry Clabaugh and Susannah Barnhiser, born on July 18, 1861 in Wyandot County, Ohio.  Catherine Anna, born in 1862 in Ohio, is the daughter of Adam Sprau and Caroline Banydorfer.
The Two Families

This index card from the cemetery records helps to clarify the Clabaugh family members and dates.  Many of the offspring of Henry Clabaugh and Susannah Barnhiser Clabaugh are buried in Pleasant Ridge Cemetery (also known as Mount Zion Church Cemetery), Tymochtee Township, Wyandot County, Ohio.  Located west of Sycamore, Ohio.
Known children of Henry and Susannah Barnhiser Clabaugh are:
The known Children of Adam M. Sprau and Caroline Banydorfer.  Many of the offspring of Adam and Caroline Sprau are buried at South Bend Cemetery (also known as Bethel Cemetery), McCutchenville, Seneca County, Ohio with their parents.
The Story 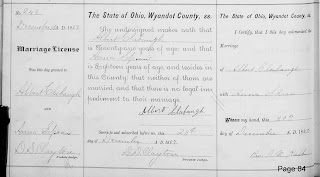 James Albert Clabaugh and Catherine Anna Sprau married on December 29, 1887 in Wyandot County, Ohio.  The ceremony was preformed by Reverend Isaac N. Kalb.  Rev. Kalb was a minister with the Methodist Episcopal Church and was in charge of the Round Head Circuit.

On May 6, 1889, a daughter, Elsie Clabaugh was born to James and Annie at their farm in Tymochtee Township, Wyandot County, Ohio.
James was a farmer, like his father, Henry Clabaugh.  Henry, at his death in 1891, owned 330 acres in Tymochtee Township.  It would be a safe bet that James either purchased or inherited land from his father. 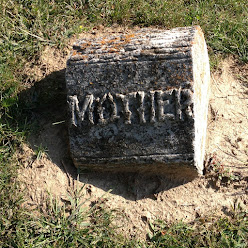 I have not located a death record for Anna Sprau Clabaugh.  The best I could find was the cemetery burial record for her husband, James.  It lists June 1908.  The main memorial marker is the double tree trunk; however there is a small log like marker in front which marks the actual burial location.  Elsie would have been nineteen when her mother died. 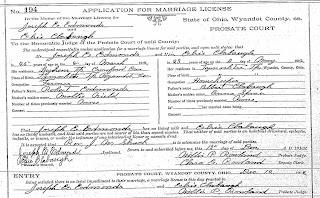 Twenty-two year old Elsie Clabaugh married twenty-five year old Joseph Eyster Edmonds on December 12, 1912.  The ceremony was preformed by Reverend J.W. Shock in Wyandot County, Ohio, probably at the church in Tymochtee Township.  Joseph is a farmer and was living in Lykens Township, Crawford County when he married.  He lived in Tymochtee Township on his father's farm as listed on the 1910 census.  Joseph's parents were Robert Edmonds and Mollie Nield.
The Edmonds welcomed a son, Virgil Eyster Edmonds, on October 1, 1913 in Crawford County, Ohio. 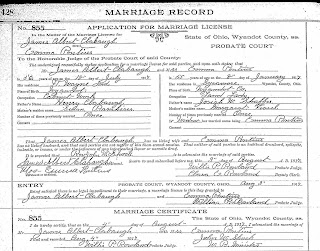 James Albert Clabaugh remarried nine years after the death of Caroline Anna.  James had left his farm life in Tymochtee Township and was living in Fort Wayne as a cabinet maker.  He married widow, Emma Shaffer Pontius in Wyandot County, Ohio on August 4, 1917.  Emma was previously married to local Sycamore photographer, David Riley Pontius, who died on June 15, 1910.  Listed as a land lady, on the 1910 census, there were boarders living in the Pontius home. 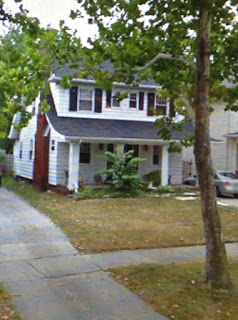 1930 Indiana Federal Census taken on April 18, 1930
James A. Clabaugh, age 68, born in Ohio and living at 229 North Cornell Circle, Fort Wayne, Indiana.  He owns his house with a value of $8,000.  James is employed as an elevator operator at a piano factory.  The Clabaugh's do own a radio.
Emma Clabaugh, age 70 and born in Ohio.  She is not employed outside the home.

1930 Fort Wayne City Directory
At some time between 1930 and 1935, the Clabaugh's moved back to Ohio, to Bucyrus, Crawford County, Ohio.  James daughter. Elsie Clabaugh Edmonds, was living in Bucyrus at the time. 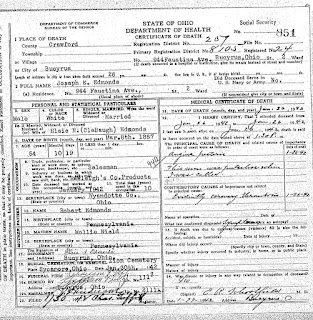 Joseph Eyster Edmonds, Elsie's husband, died on January 26, 1942 at age 54.  He was at his home, 944 Faustina Avenue, Bucyrus, Ohio.  Joseph had been a salesman for the Rawleigh Products Company for a decade.  Son of Robert Edmonds and Mollie Nield, he was born on March 8, 1887 in Wyandot County, Ohio. 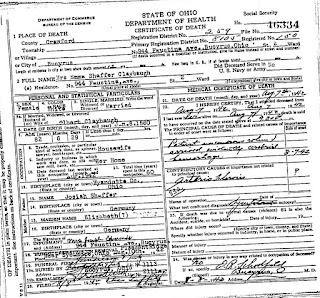 Emma Shaffer Clabaugh, died on August 7, 1942, at age 82, at the home of her daughter-in-law, Elsie Clabaugh Edmonds.  Emma , born on January 8, 1860 in Wyandot County, Ohio, was the daughter of  Josiah and Elizabeth Shaffer. 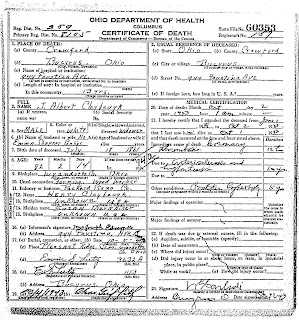 James Albert Clabaugh died at age 82 on October 2, 1943 at the home of his daughter, Elsie Clabaugh Edmonds, 944 Faustina Avenue, Bucyrus, Ohio.  Perhaps both James and Emma moved in with Elsie following her husband's death. James Albert Clabaugh was buried at Pleasant Ridge Cemetery, Tymochtee Township, Wyandot County, Ohio on October 5, 1942.  This small log like marker is in front of the double tree trunk and marks the actual burial spot for James.
Following up on Elsie and her son Virgil Edmonds.