Last Will and Testament of Mary Louise Hill VanGilder

Geez Louise!!   What a great find today out on ancestry.  I was actually wandering around looking for additional blog material about my paternal great grand aunt, Mary Frances VanGilder. There was a listing for a last will for Mary VanGilder and with fingers crossed, I opened it up. Bummer, it was only a name and page number.  Fortunately, I was able to get far enough through the listings to see that the actual wills were typed on the later pages.  And there, on page 112 and 113 was the Last Will and Testament of Mary VanGilder. 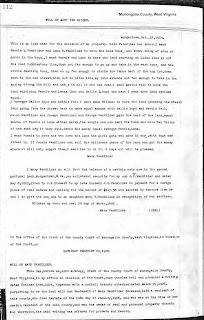 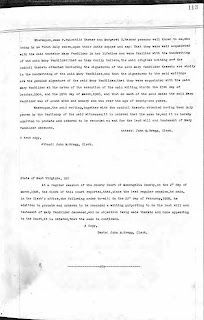 .....but it wasn't for Mary Frances.  It was the will of my paternal great great grandmother, Mary Louise Hill VanGilder. WAHOO!!!  It took me two readings to see one of the most interesting sentences down at the bottom, just above Mary's signature, "If Jessie VanGilder can sell the children's share of the land and put the money where it will help support them, I want her to do it."

Jessie VanGilder is my paternal great grandmother.  Jessie was married to George Ethelbert VanGilder who predeceased his mother, Mary.  The will lists the three remaining sons to share the remainder of the VanGilder land after her daughters receive their share.  The will also states the heirs of the three sons (written as ears in the will) will receive their father's share.  I will have to do further research to find the bill of sale for Jessie's land sale.  My paternal grandmother, Sarah Margaret VanGilder (aka Grams) would have been one of the heirs that the land was sold to help support.

This story is not finished.  I need to do more research.

A sample of some VanGilder blogs on Flipside:

George Ethelbert VanGilder  I'm in shock that I have not written more.  I need to get busy ;-)


While I was researching Carson Perrie Boyd's life for my last blog, I realized that I had never spent time writing about his mother, my paternal great grand aunt, Sallie Ellsworth Vangilder Boyd.  From all the records I could find her name was primarily written Sallie, although I have seen Sally.  I wonder if Sallie was her given name or if it was a nickname for Sarah.

Sallie was born on March 11, 1863 in Morgantown, Monongalia County, several months before West Virginia was granted statehood.  Daughter of John Oliphant VanGilder and Mary Louise Hill VanGilder, she joined a family of a sister and three brothers.  One of the reasons I wonder that Sallie's given name might have been Sarah is that both of her parents mothers was named Sarah.  Certainly during the mid to late 1800's it was common to name the older children after their grandparents.

Sallie was only a baby during the Civil War.  She was probably unaware that her father served as a Captain with C Company 14th West Virginia Militia.  By the time she was seven, her family was living on the old Hill Family farm in a log cabin on Stewart Street in just outside the city limits of Morgantown.  Her father, who had made his living as a chair maker, took up farming and had plenty of family hands to assist with the work.  By 1875 the VanGilders had eleven children.

On August 4, 1883, the family suffered the loss of the oldest daughter, Anna Bell VanGilder, to heart disease.  Sallie was twenty. 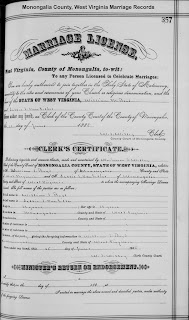 Sallie and William raised a family of eleven, one son died as an infant.


The Boyd's lived in various houses in and around the Morgantown area during their marriage.  William was employed in the early 1900's as an oil rig builder and later as a house carpenter.

There are numerous photos of family gatherings, primarily VanGilder, although some of Sallie's children also attended as adults. 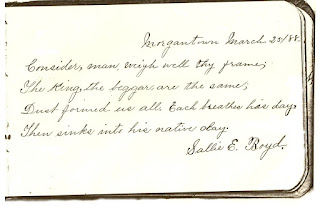 One piece of family memorabilia that we have is the George Ethelbert VanGilder autograph album.  George is Sallie's brother and my paternal great grandfather.  Sallie signed her brother's autograph book in 1888.

Unfortunately, not much additional personal information can be added to Sallie's blog. The 1930 West Virginia census gives her marital status as divorced.  271 Stewart Street in Morgantown was the family residence for a decade or two and several of her, now adult, children lived with her from time to time.  The house must have been large enough to house numerous people as she also had lodgers. I have no additional information on William M. Boyd. 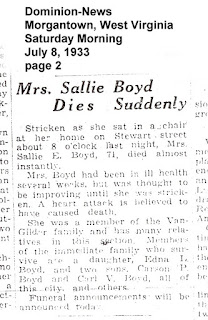 Sallie died at home on July 7, 1933 at the age of seventy.  She was buried at Mount Union Cemetery, north of Morgantown, in the same cemetery as her parents, several siblings and two sets of great grandparents--Robert Hill and Rebecca Caldwell Hill; and Purnell Houston and Mary Carey. Also several of the Boyd children are buried around their mother.