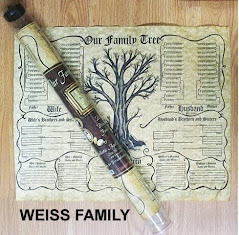 It wasn't until I was working on updating my genealogy website that I realized that I never blogged about my paternal third great grandparents, Frederick Heindrich Adolph Weiss and Ferdinande Lehman.  There are still so many missing pieces to their story and hopefully some descendant will wander onto Flipside and email me.
I have no photos of these ancestors....only census reports and death certificates.
Frederick, was born circa 1826 in Mecklenburg, Germany and married Ferdinande Lehman, born in Hanover, Germany circa 1827.  My guesstimate on the marriage is 1852 in Germany.
Two known children were products of the marriage.  Adolphus Hermann W. Weiss born about 1853 in Hamburg, Germany and my paternal great great grandmother Ferdinande Weiss who was born November 14, 1855 in Hamburg, Germany.

By 1861, the Weiss Family was living in West Hartlepool, England as evidenced by the 1861 United Kingdom Census Report.  Their home was at 3 John Street in the ecclesiastical district of Christ Church.  At that time Frederick was employed as a dock laborer.

On December 27, 1870, at age forty two, Frederick Weiss died at his home on Victoria Terrace, West Hartlepool, England of pneumonia.  The place of burial is not listed on the certificate; however, most people who died before 1912 were buried in North Cemetery.  It is interesting to note that at the time of his death, Frederick was a brokers clerk.  In 1874, when Frederick's daughter, Ferdinande, married Christian Olesen, she listed her father's occupation as banker.
Following her husband's death, Ferdinande continued to live in the home on Victoria Terrace with her two children, Adolph and Ferdinande.  Listed in the 1871 United Kingdom Census report, Ferdinande is operating a lodging house in her home and her children are both employed.  Adolph as an apprentice to an outfitter and Ferdinande as a dressmaker.  I was most surprised to find that one of the lodgers listed in the Weiss home was Christian Olesen, my paternal great great grandfather, who later married the younger Ferdinande Weiss.
On the 1881 United Kingdom Census, Ferdinande at age fifty four, was living at 10 Lower Reed Street, Stranton.  Both of her children have married.  She is maintaining a lodging house with three man who are involved with the shipping industry and one young woman who is a servant in the home.  Undoubtedly someone to assist Ferdinande with the daily duties of running a lodging home.
Ferdinande Lehman Weiss, age sixty two, died on May 22, 1888,  at 20 South Scarboro Street, West Hartlepool, England from dropsy--an old fashioned term for edema.  Contributing factors were cardiac issues.
Additional information can be found on my genealogy website, which is VERY outdated.  More current information can be found on Flipside:
Frederick Heindrich Adolph Weiss and Ferdinande Lehman
Christian Invart Olesen and Ferdinande Weiss
I have limited information on the Weiss' son, Adolphus Hermann W. Weiss.  From records I know he married Mary Elizabeth Middlemass, daughter of George Middlemass at All Saints Church, Stranton on September 19, 1876.  To this union was born a son, William Ernest Weiss, born in 1881 in Sunderland, Durham County, England and died in 1882 Were there other children?  Where did they go after 1883?
Adolph Herman W. Weiss and Mary Elizabeth Middlemass
Any descendants of Adolph and Mary Elizabeth Weiss, PLEASE contact me. 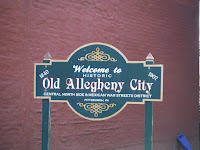 This past weekend I had the pleasure of spending time in my hometown of Pittsburgh, Pennsylvania attending my 50th high school reunion.  So extremely wonderful to reunite with old friends for two evenings.

My husband and I had planned to visit The Mattress Factory, an exciting three building installation art museum, on the North Side of Pittsburgh.  The area now referred to as the North Side was once called Allegheny City...a portion of land across the Allegheny River from the city of Pittsburgh.  As late as 1921, when my mother and father were born, it was listed on their birth certificates as Allegheny City.

A high school friend also mentioned that we should wander up Jacksonia Street to visit Randyland.  This is a colorful "must see" destination when on the North Side.

Part of my walk about was to try to locate streets and homes listed on various federal census reports for members of my family who once lived in Old Allegheny City/North Side.

Huzzah!!!  I did have one success.


My paternal great grand aunt, Olive Poole Reeves, at age 57, ran a boarding house at 1240 Palo Alto Street during the 1930's and 1940's located on what is now referred to as the Mexican War Street area on the North Side of Pittsburgh.  The large red brick building is still standing at the corner of Palo Alto and North Taylor.  According to census reports, Great Grand Aunt Olive rented the building.  During the 1930's she had six lodgers and two boarders.  There was another family living there; however I do not know if they paid rent and maintained their own quarters or were also boarders.

Of great interest to me--one lodger was John A. Pinyerd, my paternal great grand uncle.  He was married to Olive's sister, Sarah Ann Poole Pinyerd.  John was a riverboat engineer and was probably spending a night or two in Pittsburgh while his boat was docked on the Allegheny River.  Two boarders were Olive's niece and nephew, Olive Pettit Bashaw and Poole Leon Bashaw (my first cousins two times removed).

I did Google lodger and boarder to determine the difference.  A lodger is a person who rooms and a boarder rooms and receives meals.  Running a boarding house was a frequent occupation to the Pool women.  My paternal great grandmother, Jessie Poole VanGilder ran boarding houses in Morgantown, West Virginia and Woodlawn, Pennsylvania after her husband's death.  She was also the cook on a riverboat until her retirement.  Another sister, Sarah Ann Poole Pinyerd, John's wife, was a nurse and ran a maternity hospital in her home in North Charleroi, Pennsylvania.  Some very resourceful women.

Great grand aunt Olive continued to run her boarding home at 1240 Palo Alto in the early 1940's.  She is enumerated on the 1940 Pennsylvania Federal Census running her boarding house with three lodgers. 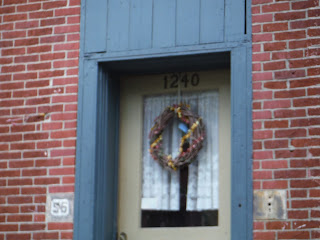 I did look for other houses on streets on the North Side--primarily my maternal great grandparents, Charles and Wilhelmina Stark.  Some streets are no longer in existence and house numbers have been changed as new homes were added.  Point in case.  The house Great Grand Aunt Olive lived in was numbered 1240 in the 1900's; however a brick with a number on it beside the door lists the house as having a different number (#56) during an earlier time.  Unfortunately my photo is not as clear as I would have liked.

Jumping Back into the Poole:  Olive Poole Reeves