Five or six o’clock would come on a summer day and a cow bell would sound throughout the neighborhood followed by a loud motherly voice…Lin….Ken….Jeff.

We were summoned from our play to come to dinner.  From a friend's backyard, from our playground in the woods, from who knows where.  Childhood in the 1950’s.

Martha Jean Stark, daughter of Charles Edward Stark and Martha Marie Frederick, who married later in life and had one child on December 4, 1921.  Martha, known as Marse, grew up in Avalon, a borough outside of Pittsburgh, Pennsylvania, graduated from Wooster College in Ohio and married George VanGilder Hughes, a neighbor, who she attended Avalon schools with from first grade through high school.

Unable to find the name of the magazine

There are numerous, beautiful photographs of Mom, taken through her early years by paternal uncle, Alfred Walter Stark, a professional photographer.

Mom's years before college was one of privilege.  Not wealth, but certainly one of an upper middle class, even during any financial downturn in the country.  Her father, was the head of the traffic department at Carnegie Illinois Steel Company.   The traffic department was the financial end of the operation...the claims department....the money crunchers.

There were summer vacations to various cities and beaches, summer camp weeks, family gatherings with both sides of the family (Stark and Frederick), dance lessons, quiet evenings with opera streaming through the apartment played on a Victrola, weekends spent with friends at the movies in town or playing Monopoly.

One childhood item that I was unaware of was a speech issue.  Mom did not actually identify what the issue was; however, she did take elocution lessons from her paternal aunt, Emily Stark Miller.  The lessons took place sometime during Mom's elementary school years.  Aunt Emily must have been a great teacher as Mom put the lessons to good use as she moved through her life.

She was encouraged by her father to excel in academics.  And she did.  By her senior year she was the editor of the senior yearbook, a writer for the school newspaper, elected to The Quill and Scroll (a national honorary journalistic fraternity), acted in two school plays her senior year,  and was one of four commencement speakers....the only female.  By the way the salutatory was given by her future husband, George VanGilder Hughes, who she was dating.

Off to The College of Wooster, Wooster, Ohio in the fall of 1939. George headed to Washington & Jefferson College in Washington, Pennsylvania and they continued their relationship long distance. 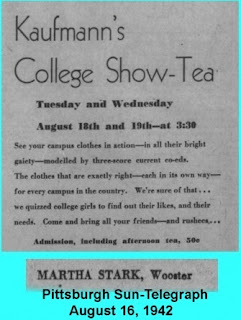 I was somewhat amazed by this newspaper article I found. Mom was chosen as a college student to model fall school fashions at Kaufmann's Department store in Pittsburgh. This would have been just before beginning her senior year at Wooster.
Marse pledged a college women's social group, was active in the drama department and Kappa Theta Gamma Wooster's drama fraternity, a department head of the school's newspaper, debate, student senate, YWCA club and The Big Four Cabinet. Her major was English and teaching, graduating in May 1943.

George had fast tracked his college experience in three years and was already attending medical school at the University of Pittsburgh when Martha graduated.  At this time the young couple knew a child was on the way.  With years of medical school, internship and residency ahead, they made the tough, courageous decision to allow adoption through Catholic Charities. 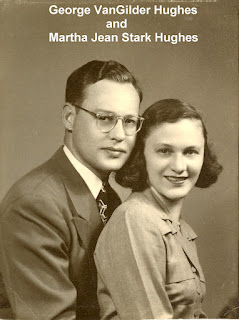 Other Blogs on Flipside