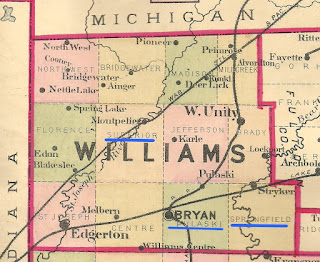 Amanda L. Kime was born circa 1862 in Williams County, Ohio, probably in Superior Township.  Amanda may have been born while or just before her father, Henry C. Kime was away serving with the Ohio Volunteer Army in the Civil War.  Her mother was Sarah Ann Barnhiser Kime. 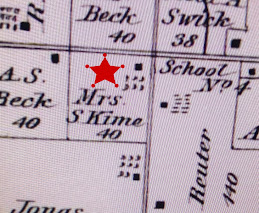 Sometime between her father's death in 1863 and the 1870 Ohio census, her mother moved the family east to Ridge Township, Wyandot County, Ohio.  Sarah purchased 40 acres of land with a farmhouse.  There was a school across the road which was convenient for her children to attend. 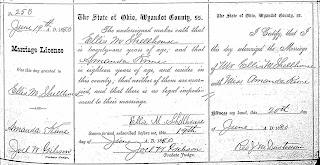 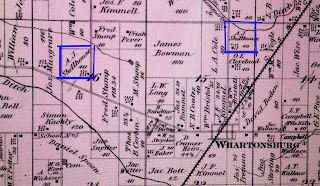 The newly weds settled in Richland Township, probably in one of Ellis' father's farmhouses.

On August 20, 1880, the Shellhouse's welcomed their first born, Harry Ada Shellhouse.  He was born in Richland Township, Wyandot County, Ohio.

Rosa Bell Shellhouse joined the family on August 24, 1883.  She was born in Richfield Township, Wyandot County, Ohio.  There is another Shellhouse baby listed above Rosa, Nettie Shellhouse born to Charles and Elizabeth Shellhouse.  Ellis and Charles are not brothers.  Perhaps cousins.

Bessa Maud Shellhouse joined the growing family on May 16, 1885 in Richland Township, Wyandot County, Ohio.  Her birth record is somewhat difficult to follow with the mistakes and arrows.  Again on the record is another child born to Charles Shellhouse.  A Shellhouse competition, wink, wink.

A fourth child was born to Ellis and Amanda Kime Shellhouse on September 16, 1886, Grover Burle Shellhouse.  The birth took place in Richland Township, Wyandot County, Ohio.
I do want to apologize for my cut and paste of the birth records.  Many of the birth places were ditto marks from records above in the listing.

A grief stricken family buried Amanda L. Kime Shellhouse, probably in Wharton Cemetery.  She died on September 7, 1888 at the age of 27.  Her death record lists Williams County, Ohio as her birth place and Wharton, Richland Township, Wyandot County, Ohio as her place of death.  Cause of death was typhoid fever.  Perhaps her mother, Sarah Ann Barnhiser Kime, had already settled in her house in Wharton and Amanda was moved there for medical assistance.
If he was not already living with his parents, Ellis Shellhouse, now a widow, was living with them in 1900 along with three of his children; Rosa, Bessie and Grover.  Ellis is a farmer and renting land, perhaps from his father.  I have not been able to find where Harry Ada Shellhouse was living, there is no enumeration for him in 1900 or 1910.
Ellis is enumerated with his mother in 1910 and working the home farm.  None of his children are still in the home.  Bessie married Frank Exline on March 28, 1907 in Wyandot County, Ohio.  Grover Burle was living in Sandusky, Ohio with his married sister, Bessie Exline on the 1910 census.  He was working as a polisher in a factory.
Ellis is enumerated in 1920, with his mother and to children, Rosa and Burle.  He is farming.
In 1930, Ellis is living in Canton, Clark County, Ohio.  He is retired and living with his married daughter Rose Bell Shellhouse Young.  She is married to Ernest F. Young, an insurance salesman, and has three children. 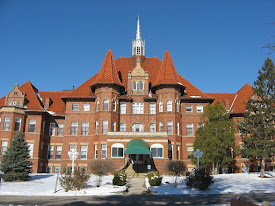 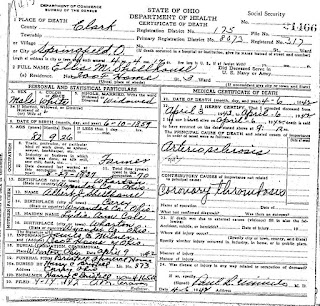 Ellis M. Shellhouse died on April 6, 1942, at age 82, while a patient at the I.O.O.F. Home in Springfield, Clark County, Ohio.  The death certificate lists his birthdate as June 10, 1859, Wharton, Wyandot County, Ohio.  He was a farmer for 70 years of his life.  Ellis was buried on April 9, 1942 in Wharton, Wyandot County, Ohio.   I believe he was buried in Wharton Cemetery where his mother and father are buried.
Ellis never remarried.  He, along with the assistance of his mother raised three of his children.
Children born to Ellis M. Shellhouse and Amanda L. Kime Shellhouse: