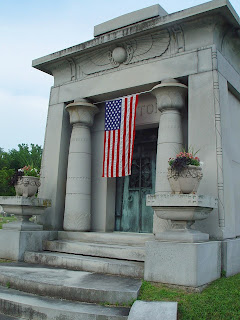 What's that old saying....curiosity killed the cat. (Apologies to all cat lovers out there--remember I have three of them myself.) I hope it doesn't come to that, but I am dying of curiosity to know who is inside the Houston mausoleum. When we were in South Charleston, Ohio this past weekend, Ken and I stopped by the Greenlawn Cemetery, just north of town. Right in the middle was this most impressive burial mausoleum with HOUSTON carved on the front. In my shot it is hidden under the American flag.

The Houston family was one of the primary movers and shakers of the village of South Charleston and Clark County at the turn of the 20th century. This particular branch of my Houston family would be considered my half cousins. The progenitor of the branch stopped by the Morgantown area to see his half brother, Purnell Houston, my gggg grandfather in the early 1800's before settling in Kentucky and then on to Clark County, Ohio and South Charleston. 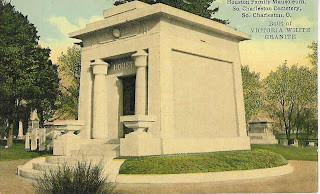 The mausoleum is an important local landmark
and even has several postcard photos of it!
Original in the possession of my cousin
My half 6th cousin, now living in his great great granduncle's home in South Charleston, was able once to get inside the mausoleum as the key was, for years, in an unknown location. It is still not all that readily accessible to the family. There are photos of the tombs buried inside, plus a listing of the names and dates.
Of the eight spaces, seven are filled. As a family historian I am on a "need to know" mind set at present. Who is in there? We were not able to get inside this visit. I have my fingers crossed that my cousin will locate the photos and written piece of paper. Currently, I am struggling with misplaced items, the primary one being the rather lengthy listing of this very branch of the Houston line!!! So I know how it is. So much work....so little time.
One day I will open my e-mail and there it will be. 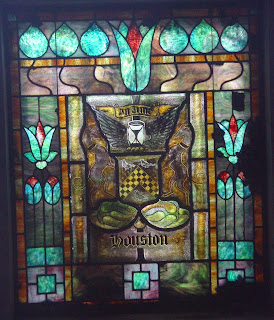 Photo with lens pushed against the metal mesh front window