Smile for the Camera--Wedding Belles

The word prompt for the 14th Edition of Smile for the Camera is Wedding Belles. Historically, couples married in the month of June to honor Juno, the Roman goddess of marriage. Others did it to time conception so births wouldn't interfere with harvest work. And brides in the 15th century chose to marry in June because it coincided with their "annual bath" - that's right - ensuring a relatively sweet-smelling honeymoon. 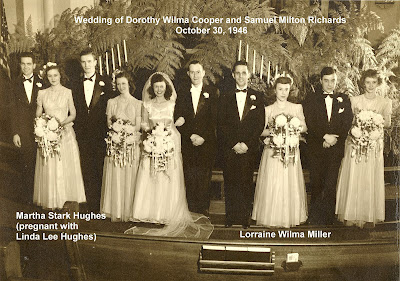 When I began working on this blog, I quickly realized that I did not have many wedding photos in my genealogy cache of family pictures. My Mom and Dad did not have a white wedding dress ceremony. They were married during World War II when my Dad was in medical school. Their ceremony was small, only family attended, and my Mom wore a new suit. There were no photos taken of either of my grandparents weddings. I think the only family wedding photos, other than my own, are those from the marriage of my Aunt Faith and Uncle Ed in 1955. I was the flower girl.

Then I remembered the professional wedding photograph of my mother’s first cousin, Dorothy Wilma Cooper. After my mother’s death in 1999, I was going through her closets and ran across a box that was filled with her memorabilia. In a manila envelope there was a wedding photo. It was the marriage of my mother’s first cousin, Dorothy Wilma Cooper to Samuel Milton Richards.
Dottie and Samuel married on Halloween, October 31, 1946 in Pittsburgh, Pennsylvania. Two of her attendants were her first cousins, my mother, Martha Jean Stark Hughes and Lorraine Wilma Miller.

The name Wilma is common in this generation of cousins as their grandmother was Wilhelmina Stark. Three of the five girl cousins had Wilma as a first or middle name.

I first met “Cousin” Dottie in the mid 1990’s. She was so welcoming and shared numerous family stories and photos of our mutual Stark side of the tree. Once, when we were talking about the family, she showed me the photo of her wedding and shared the following story.

Dottie asked my mother to be one of her attendants. Several months before the wedding day, my mother became pregnant with me causing some concern that Mom would not fit into her gown by the end of October.
The knowledge of this story makes the wedding photo very special to me….after all; I was also in the wedding party!