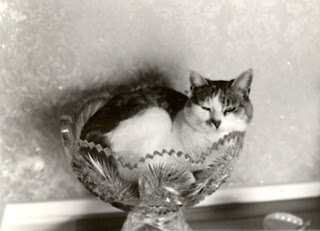 My blogging buddy, Greta, over at Greta's Bog, has had a series called Language of Cats and comes up with some pretty clever titles....with, I understand, the assistance of her husband. I don't know, Greta....all I can come up with for this one is....."punch drunk" or "bowl-ing".

I think a little history is needed here because, after all, this is a blog!

My brother, Jeff, took this photo for a photography class in college. I am guessing that the cat is Mame, as my mother had a penchant for naming her cats from Broadway shows. Addendum: Jeff just called and the cat is Zip, a song in the show, Pal Joey and the photo was taken in 1976. 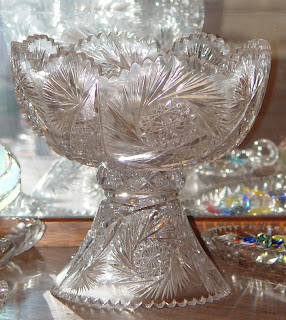 The photo has been a comical, fav of our family since it was taken. The humor....Mame has decided to take her afternoon nap in one of our treasured family heirlooms.....a turn of the century, American Brilliant Period, cut crystal punch bowl complete with buzz stars, pinwheels, fans, hob stars and a pedestal. My mother told me that it belonged to her mother, Martha Marie Frederick Stark and was used for family gatherings. It came into my possession when Ted and I purchased our first home. I have three cats and none of them has chosen the punch bowl as a place to repose!
P.S. And yet another springboard from Greta's Bog....boys, this is one you DON'T sell when I am gone!!! ;-)
Posted by Linda Hughes Hiser at 6/11/2009 07:48:00 AM