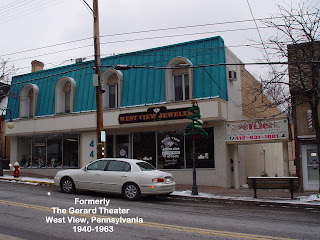 Whenever I consider my elementary and junior high school days, the Gerard Theater, once located in West View, Pennsylvania comes to mind. I have spent some time researching this old West View landmark and have found very little. Hopefully, a reader or family member will be able to supply me with photos to enhance this blog.
The Gerard was located on Perry Highway, right smack dab in the center of West View, nestled between other businesses. It was a short ride by car from our house and I was able to walk there in the later years of elementary school.
It was my first introduction to movies on the large screen and in color. We did have a television back in the early 1950's, but it was black and white and the screen, as I remember, was pretty small.

Many Saturday's were spent down at the Gerard with my best friend and neighbor, Ruthie. A decent sized bag of popcorn was only a dime back then and, if you were lucky, there might be a small slip of colored paper down near the bottom of the bag which entitled you to a FREE bag of corn.

There were some interesting features at the Gerard. The every other seat on the ends of the center section, both left and right, were large enough for two people to sit in.....appropriately called "love seats!" And, a somewhat unusual room, located upstairs, was the "cry room." This was a sizeable room on the second floor....glass enclosed, with comfortable seats. Mom's with toddlers or crying infants could come to see the film and not bother the patrons in the main theater. Toddlers could run around the room at will. Once or twice Ruthie and I saw the film from the "cry room" just to give it a try.

My first 3-D movies were seen at the Gerard wearing those cardboard glasses with blue and red cellophane over the eye area. Terrific Japanese monster films like Rodan and scary dracula and vampire films were shown with regularity. Early cartoons, sci-fi , cowboy and beach blanket movies were favorites. And who could forget those Hitchcock thrillers. Usually there were news reels shown after the previews. Occasionally there were double feature afternoons....two movies for the price of one.

I saw movies at the Gerard from about 1952 until we moved in 1961. It was an important feature of my childhood. When my brother, who also went to Gerard, and I went back home over the holidays, we drove into West View. The theater is no longer there, but the building is and when we saw the long extension from front to back, we knew it was formerly the Gerard.
==========
Some Gerard Theater History
The Gerard Theater opened it's doors on January 19, 1940.1 Soon after its opening, James H. Nash became the manager/owner a position he held until his death on May 26, 1963. Previous to owning the Gerard, James was a salesman for United Artists. An innovator, he added a nursery for preschool children and then the "cry room" in 1945.2 He wanted mothers with young children to be able to attend the movies and not have to worry about a babysitter.
Six months after his death the theater was sold to Robert McConnell and it became a dance hall/roller skating rink for the local teens.3 This enterprise did not last long as in January, 1965 the building was sold to Flooring Specialists, Inc.4 On September 8, 1960 the West View borough offices were moved into the "old Gerard Theater building" and remained at the location until December 11, 1976.5
The newspapers on line do not trace the old Gerard Theater building past 1976. As you can see from the photo, there is currently a jewelry store housed there and from the sign, perhaps it has been there since 1995.
==========
I probably visited the Gerard for the last time during the winter and spring of 1961 as we moved from the North Hills area to McCandless Township. Malls with modern movie theaters were close by and West View was a drive. Looking back though, it is the Gerard that is part of my stored childhood memories and not mall theaters. I guess that says something!
Sources:
1. "Gerard Theater Will Open Tonight," Pittsburgh Post Gazette, Pittsburgh, Pennsylvania, January 19, 1940, page 14.
2. "Mothers Can See Movies While Babies Cry," The Pittsburgh Press, Pittsburgh, Pennsylvania, October 31, 1945, page 38. Newspaper photo of cry room!
3. "Gerard Will Become Dance Hall/Rink," North Hills News Record, Wednesday, November 20, 1963, page 1.
4. "Gerard Theater is Sold," North Hills News Record, Wednesday, January 6, 1965.
5. North Hills News Record, Pittsburgh, Pennsylvania, December 11, 1976, page 1.
OBITUARY OF JAMES H. NASH

Also owner of the Wexford Starlight drive-in....well then, me thinks there will be a continuation of this blog going forward into the 1960's!