So this is your chance to share any of your black and white postcards, or colour postcards featuring white (think white sands and snow, White Cliffs of Dover etc.). As always, feel free to play with the theme. Do you have postcards depicting places that incorporate the word white (or bianco, blanc etc.)? How about a play on words (e.g. white elephant, it`s not black & white?) You’ve pretty well got carte blanche! Thank you to Evelyn over at A Canadian Family for hosting this event.


My postcard features my paternal grandfather, George Henry Hughes, who is riding on the back of a first aid wagon on the Queens Road, which I think is in Toronto, Canada. George was not able to enlist in the U.S. Army during World War I because his vision was so poor. Wanting to serve, he took a bus to Toronto, Canada and on August 1, 1917, age the age of 19, he enlisted with the Canadian Expeditionary Force as a member of the 20th MGC (Machine Gun Company). He was trained on the Vickers Machine Gun and earned his sergeant stripes poor eyesight and all ;-) 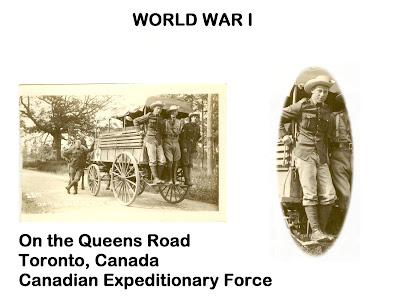