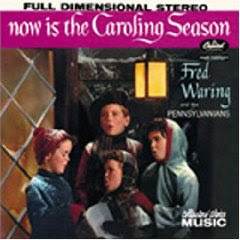 I've been waiting for this one! Christmas music was a staple in our house all during the holiday season. There was a sizeable selection of LP's.....Bing Crosby....Frank Sinatra....various choirs.....and "Now is the Caroling Season" and album by Fred Waring and His Pennsylvanians.
I think this was my Mom's favorite and she played in continually during the day. The songs were embedded in my mind. Even when the three of us kids became adults, the album received alot of play time. Since I didn't have the album, I decided to tape it back in the 70's. The tape became part of my children's memories as I played is continually during the day....just like Mom!
Several years back I decided I had a need to have the LP and even a CD of that album. After taking a spin around Ebay, I found and bought both. Good thing as the tape wore out.