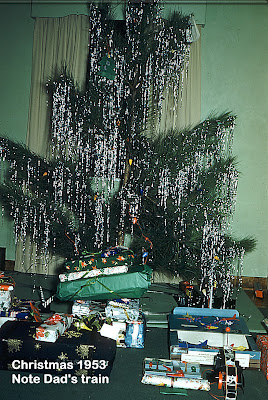 The tradition in the 1950's Hughes family was a real tree. We did not go out into the woods with axe in hand. Rather we usually drove to the local nursery and purchased one that was already cut and tied with twine. Looking at the trees in the few 1950's photos that I have, they certainly do not fall into the "perfect shaped tree" category. My Mom would go all out decorating the house with real pine and a large assortment of holiday bric-a-brac. I always thought it looked W-O-N-D-E-R-F-U-L. 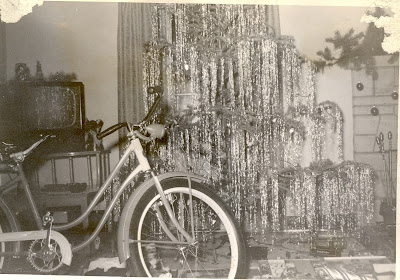 My amazement as an adult, looking back at those photos is the tinsel. That job was my Dad's. It took him hours as he meticulously took each aluminum strand and carefully laid it over the branches....one beside the other. It was and still is, a sight to behold. The tree did not have a great deal of ornamentation other than the tinsel, but as the years went by lights, balls and handmade decorations began to grace the tree. 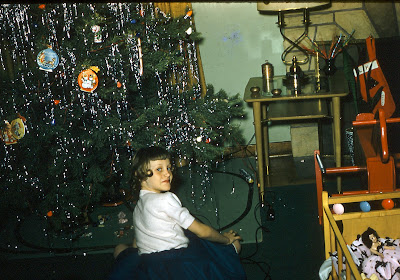 Probably one of my favorite memories of the tree was the train that ran under it. My Dad loved his model train. It was not something that was present during the rest of the year....it only came out at Christmas. Each year he would add new plasticville model buildings and a couple of new cars and/or engines. In the scheme of things, it was pretty rudimentary....but I loved to play with it. I can't remember it under our 1960's trees, but he did continue to add cars and buildings to an HO set and then in the 1980's he went to an even smaller model.
Before my Mom died in 1999, I spent a long evening interviewing her and getting it all on tape. One of her vivid memories of the Hughes Family Christmas, that would be my grandparents George Henry and Sarah VanGilder Hughes, was their holiday parties. It was pretty typical of Grams and Pop Pop to have lots of family and friends in before Christmas. After a meal and drinks, they would decorate the tree. My mother's exact quote from the tape transcription, "There were big Christmas parties, everyone drank and then decorated the tree by throwing tinsel and balls on, or at, the tree. The whole gang would decorate."

I have to chuckle everytime I read this....Grams and Pop Pop did love to have folks in. My grandfather would frequently come home from work or even a walk uptown bringing a friend or two for dinner and Grams would have no forewarning. I think growing up with a mother that ran boarding houses fully prepared Grams for the unexpected guest (s). 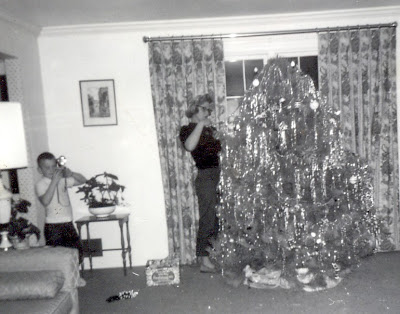 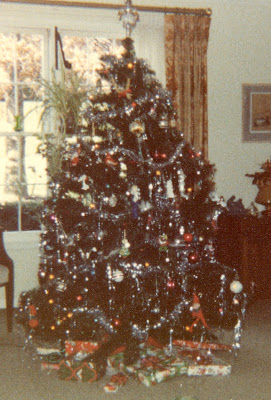 Early 1970's Christmas Tree
Perhaps growing up with the older generations tree decorating "free for all" is what made Dad decide that his trees would be carefully adorned....and they were. Into the 1960's and beyond, the decorating was left to us kids and then as a teen, my brother Jeff, pretty much single handedly decorated the tree.