When I am driving through small and larger towns I am fascinated by the turn of the 20th century architecture and building facades. Many of those that have survived the test of time have the building’s name and date carved in stone at the top. Today, many of those names have been highlighted with paint to identify the first tenant. I often wonder who owned the building and what was housed inside. This series of blogs will grow as I continue to photograph and research those that I see on my travels.

In August 2009, I was fortunate to spend a glorious week in St. Joseph, Michigan. While wandering around the town area I found several building that qualify for my Stories in Stone series. The Mollhagen Building, built in 1924 is located today at 307 and 309 Main Street. 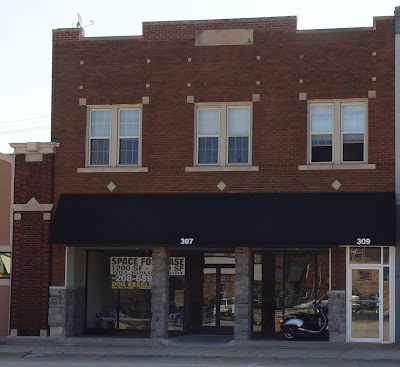 The Mollhagen family was part of the St. Joseph, Michigan landscape as early as 1855 . They were from hardy German stock and made their livelihood as fishermen. When researching this surname I had to work backwards from the 1930 Michigan census to determine which Mollhagen built the building and what was housed inside. My surprise was that it was NOT a store that sold fish.

Charles Mollhagen, a fisherman, born in Germany and married to Christine, lived in St. Joseph, Michigan from about 1855. One of their children was Louis W. Mollhagen. 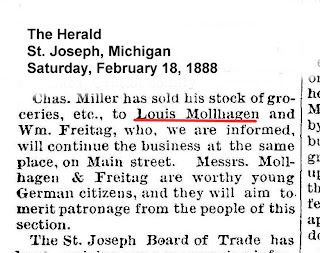 In 1888 Louis W. Mollhagen, along with a friend, William Freitag, purchased a grocery store located on Main Street from Charles Miller. Louis married Henrietta Bardenbort (Hattie) and the two began to raise their family in St. Joseph, Michigan. The 1900, 1910, 1920 and 1930 Michigan census reports list Louis as the owner of a grocery store. Louis' son, Lester, when he was of age, asssisted his father in the store.

The Mollhagen building standing today at 307/309 Main Street was built by Louis. By 1924 the store was called Mollhagen & Son and the store was run by Louis and his son, Lester Louis Mollhagen. Lester married Carrie Olive Brown and his family lived at 309 Main.

Lester Louis Mollhagen was born March 4, 1892 in St. Joseph and died on February 5, 1965 in Michigan. Lester and his wife, Carrie Olive Brown, his father and mother are all buried at the Lakeview/City Cemetery, St. Joseph, Berrien County, Michigan.

-Information on Louis W. and Henrietta Bardenbort Mollhagen from a Family Tree on Ancestry.