The Hughes Family has sadly lost two of our oldest members in 2009. I received an e-mail from our cousin Betty of Hartlepool, England on Christmas Day. She relayed the sad news of Mary's passing on December 16, 2009. John and Mary were devoted to each other having been married sixty-six years. My two brothers and I were privileged to meet them at their home at 23 Borrowdale Street, Hartlepool during a visit to the UK in August 2003.

John George Marsh, son of Eli Marsh and Mary Alice Hughes was born on May 23, 1919 in West Hartlepool, Durham County, England. John died at his home on May 25, 2009 at the age of 89 with Mary by his side. John's mother, Mary Alice Hughes was the sister to my great grandfather, John George Hughes. The Eli Marsh family lived in the Hughes home at 70 Florence Street, Longhill Section of West Hartlepool.

Mary Pounder Marsh, the daughter of Richard Pounder and Mary Herring, was born on January 4, 1923 in Hartlepool, Durham County, England. Mary passed peacefully in the Hartlepool Hospital at the age of 86. 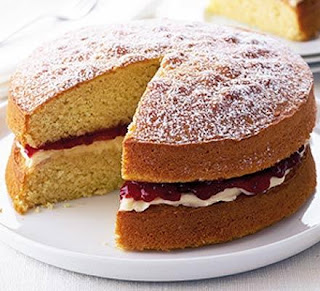 I can remember our day together like it was yesterday. We drove from cousin Betty's home with Alan and Judy Hughes over to the Marsh house in the early afternoon. Mary welcomed us with hugs and kisses. She was just taking two delicious looking cakes out of the oven as we arrived. Mary told me that she baked daily...had all her life. Now, John didn't eat much if any of the baked goods, so she gave them to friends and family.

Quite a tea was served. The cakes were consumed with gusto! One was a vanilla cake with a touch of almond flavoring with whipped cream and strawberry jam between the two cake layers (Cake Victoria). There was a gingerbread cake, which I learned is the true test of a woman's baking skill in England. After I returned home, I wrote to Mary and she sent me the recipes for both cakes. 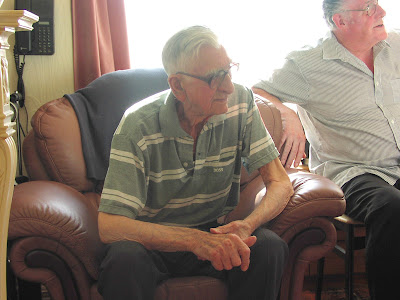 John George Marsh and Alan Hughes
First Cousins. Both died in 2009
John was the center of attention during the visit. He was so animated and full of Hartlepool Hughes stories. Poor Ken....my brother was juggling a tape recorder, using his laptop and also filming at the same time. Sometimes I just ask too much ;-) 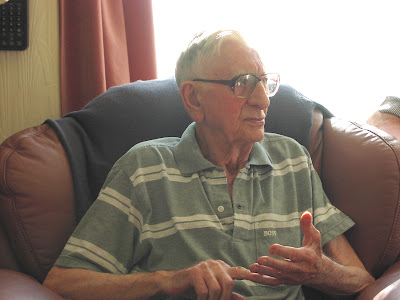 John was thrilled to see a copy of an old photo postcard of his Grandmother Hughes (my great great grandmother) standing out front of the family green grocer store....the same store/house that he had grown up in. He also identified my great grandmother and his aunt, Elizabeth Olesen Hughes calling her "Lil". It was a name I had never heard before. John recalled with a laugh that his stateside Aunt and Uncle, John George and Elizabeth Olesen Hughes, would send him an American dollar and a box of candy each year for his birthday. I did not know John's middle name until our visit and it was another new puzzle piece for my FTM program.....John was named for his uncle and my great grandfather, John George Hughes. 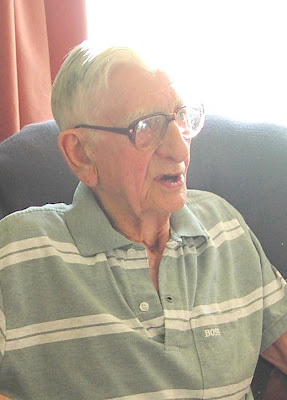 Since John lived with my great great grandparents he had an endless supply of stories. As you can imagine I was glued to his every word the entire afternoon. 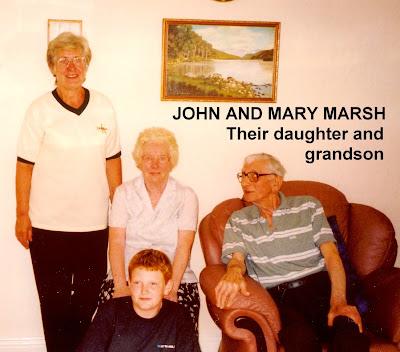 We were so fortunate to have had the opportunity to spend time with these two grand family members. Over the years I did keep in touch with John and Mary, sending Christmas cards and letters. Mary was always so willing to share photos, newspaper articles and even information on her Pounder family. I wonder if she knew that John's ancestors (and mine) were also Pounders!

Rest in Peace. We will miss you.