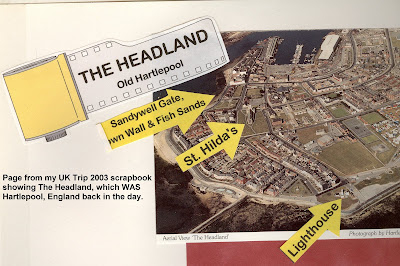 The Pounder surname is part of my paternal Hartlepool, England Hughes line. Elizabeth Pounder is my paternal gggg grandmother. To date I have no knowledge of her parents. Figuring out the Pounders of Hartlepool, England would take a skilled individual who can navigate the name much better than I. So many Pounders...so many generations....all with the same first names. 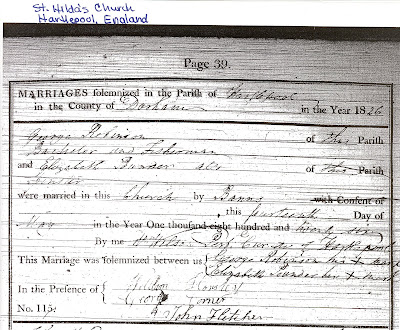 Suffice to say, Elizabeth was probably born in Hartlepool. She married George Robinson, a fisherman also from Hartlepool on May 14, 1826 at St. Hilda's on The Headland, Hartlepool, England. Ther ceremony was performed by William Wilson, Curate of Hartlepool. Witnesses were: William Horsley, George Comer and John Fletcher. From the old records, neither George Robinson nor Elizabeth Pounder were able to write their name and signed with an "X". 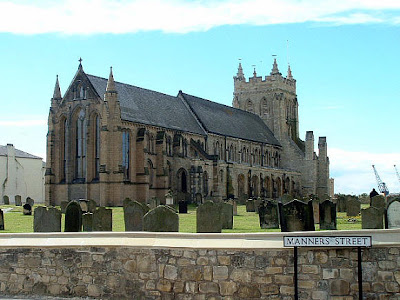 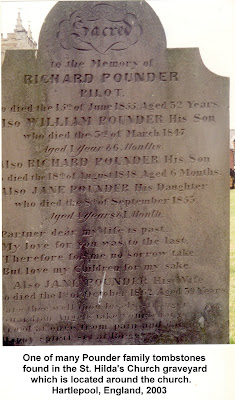 My English friend, who by the way has done all the research on this family for me, sent me an addendum to the information which was of great interest to me. It involves the derivation of the name POUNDER. "From very early times, an important village offical was the 'pinder' or 'pounder'. His job was the impounding of stray cattle in the pinfold or pound until their owner redeemed them on payment of a fine." According to my friend, "I have a true 'dyed in the wool' Hartlepool ancestor with the Pounder name that is special to the Headland (Old Hartlepool). Very cool!!!!

Birth record of
Ann Robinson, daughter of George Robinson and Elizabeth Pounder
GGG Grandmother to me and Great Grandmother to John George Marsh
My first cousin twice removed from Hartlepool, John George Marsh, married a Hartlepool Pounder, Mary Pounder. Over the years Mary and I corresponded about family and we were both surprised to find that John descended from Pounders, something he was unaware of.

Always the generous one, Mary sent me information about her Pounder family. Mary was the daughter of Richard Pounder and Mary Herring. She was born January 23, 1923 in Hartlepool, England.
Additional Information: