For those of you who collect buttons, this would be a windfall! Back in the early 1960's, as my paternal Grandmother Hughes (aka Grams) was getting ready to move to St. Petersburg, Florida, she gave me her old White sewing machine and an old tobacco can full of buttons.
It was Grams who actually taught me how to sew. Oddly, it was my maternal Grandmother Stark (aka Teek) who was the REAL seamstress. Teek could do it all....sew, crochet, embroider, knit, etc. etc. Her handwork was beyond compare. I still have a few of her pieces with embroidered roses and smocking....little dresses she made for me as a preschooler. 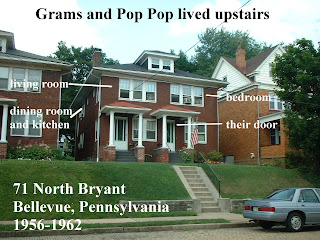 Back when I was in elementary school, on a boring summer day, I would jump on my bike and ride the four plus miles over to Bellevue and knock on Grams' front door. She would always be surprised and welcoming. I think I would do this without telling my Mom....just a whim....spur of the moment decision on my part.
Magically (my Mom was called and she would drive my things over) a little overnight bag would arrive during the day and I was a guest for several days at my grandparents. This has become a treasured memory to me.....days spent in their apartment in Bellevue during my elementary school days.
Grams and I would spend the day cooking, playing cards (she LOVED cards) and walking uptown to purchase food. These little uptown excursions always involved stopping into the local 5 & 10 and picking up a pattern, thread and a piece of material. The project was set and the sewing began.

Grams was a somewhat unconventional seamstress. She NEVER pinned the pattern pieces onto the fabric...and she would always tell me to never do it in Home Ec class ;-) She would mix up the pattern pieces to design a new look....the sleeves from one envelope, a collar from another....
She also did not always pin the fabric pieces together before she was sewing. There was also the White sewing machine. It had issues. Often the thread in the bobbin would knot up and would have to be taken apart and rethreaded. Over the years I learned the ins and outs of that machine!
I enjoyed sewing so much that I ended up beginning my college years majoring in Home Economics. I was pretty talented at making my own outfits and getting the "look" I wanted by switching out the pattern pieces....just like Grams.
I remember when Grams gave me this button can she told me that there was a high button shoe fastener in it. Not knowing what one looks like, I only guessed which odd looking item it might be. Does anyone out there know if I am right?

As to the buttons, they were cut from old clothes and saved for new sewing projects, probably from the early part of my grandparents marriage until 1960--40 years of buttons!
Posted by Linda Hughes Hiser at 8/13/2009 08:26:00 AM