Carnival of Genealogy--What if... A Whopper of a Tale of the VanGilder chair 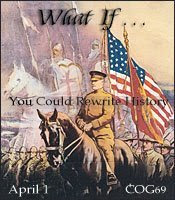 The topic for the 69th edition of the Carnival of Genealogy is: What if... This is your chance to rewrite history! Have you ever imagined your ancestor playing a major roll in history? Perhaps you've envisioned them singlehandedly winning the American Revolution, going over Niagara Falls in a barrel, or inventing the flutaphone. This is your chance to write a bit of fiction about your ancestor to delight and entertain us. It is the April Fools edition after all! This edition will be hosted by Bill West at West in New England). The deadline for submissions is April 1st so start spinning your tall tales!


My great great grandfather, John Oliphant VanGilder, was apprenticed as a wagon wheel maker when he was young. From wagon wheels, he progressed to making furniture, specifically, chairs. The VanGilder chair was well constructed and respected in and around the Morgantown, (West) Virginia area in the early 1860’s. John’s chairs gained in popularity and orders began to arrive from various dealers around the 40 states and territories. Even while the Civil War raged on, John had orders from both the north and south.

One day an order came from Washington D.C. John T. Ford, owner of Ford’s Theater had heard of the comfort and durability of the VanGilder chair and asked John to hand make chairs for the box seat section of his theater as part of a refurbishing. There would be both rocking chairs and comfortable armchairs for the box seats.

It took one year for John to hand make the chairs. The order was delivered to the Ford Theater on March 1, 1865. A month later, on April 14, 1865, during the theater performance of Our American Cousin, John Wilkes Booth shot President Abraham Lincoln at Ford’s Theater. It was a VanGilder rocking chair that he was sitting on as the bullet hit his head .

My great grandfather was so distraught by this event that he never made another chair and turned to farming.

The truth—John VanGilder was apprenticed as a wheel wright as a young man. He did make chairs in his own shop and he did farm following his days working for the Hennen Furniture Factory in Morgantown, West Virginia. And this portion of his life did happen in the 1860’s.
Posted by Linda Hughes Hiser at 3/31/2009 04:18:00 PM