I have written this blog twice….once for my Mom, which I scrapped since we are doing a special month long blog on our mothers….and once for my paternal grandmother. I must admit it was a special blog, however, when I got up this morning, I felt almost guilty that I did not include my maternal grandmother. So, in all fairness, this is my third attempt and I am honoring both of my grandmothers. 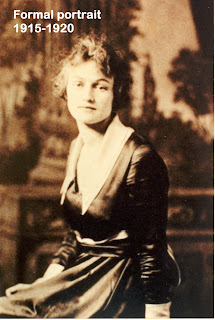 My maternal grandmother, Martha Marie Frederick Stark, aka Teek, was born on April 8, 1880 in Columbiana County, Ohio to Alfred Frederick and Lucinda Orr Frederick. I think Teek lived a pretty good life in Columbiana County. Her father was employed by the railroad and photos and memorabilia left behind all point to solid middle class….if there was such a thing in the late 1800’s!

Neither of my grandmothers learned to drive a car. Neither of them ever owned a house. Both loved their grandchildren, but quite candidly, as the oldest grand child and being a girl, I always felt I had a somewhat special bond with them. They were generous to a fault and we all spent many holidays and special days together. That is where any similarity ends.

My grandmother’s did differ from each other. Age had something to do with it--Grams was almost 20 years younger than Teek. Grams was outgoing, always laughing, anxious to get to a new project, loved to entertain, was an avid bridge player, and member of various book clubs. Teek was more reserved. She lived in a small apartment, so she did not entertain and I do not remember her cooking or baking, but she did love to TREAT! Once I was able to drive, she would call me on the phone and invite me out for lunch. We would usually have hamburgers and ice cream. Teek loved ice cream! She also would slip me a buck or two for driving her, a secret we kept from my Mom!!!!

When I was young, Teek made many of my clothes and a matching outfit for my Ginny doll. She was quite a seamstress. She could look at an outfit and replicate it without a pattern. She was also a master at handwork—embroidery, knitting, and crocheting.

Grams was also a seamstress, but less conventional. Actually, it was Grams that taught me to sew! We would go into town and purchase some material and a pattern. She had the ability of designing her own outfit by putting various pattern pieces together and coming up with something new and wonderful. A trick that I made good use of during my “sewing years.” Grams never pinned the pattern onto the material. She would laugh and say, “Don’t ever do this in your home economics class!”

I suppose the telling tale is that both grandmothers’s lived within a short distance of each other, and as an elementary school child, on summer day; I would jump on my bike and peddle the 5 miles to see Grams. She would always welcome me with hugs and kisses and immediately begin planning what we would do. Magically, a suitcase of clothes would arrive and I would be visiting for the remainder of the week. 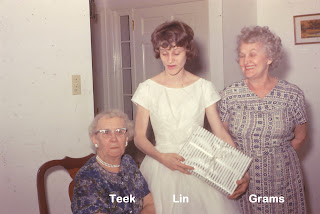 Grandmothers. Both were there to give love and support during the formative years. Both taught me good manners and passed down the valuable lessons that they had learned, but neither of them—and here is the genealogy kicker!!!—told me anything about my personal history! I think if I had a wish I could count on….I would love to have them both come back for a couple of hours so I could find out answers to all the questions that would solve my genealogy brick walls.