I have wanted to find this cemetery and locate my paternal great great great grandmother’s burial site for years. Back around 1997, another VanGilder sent me a note listing Sarah’s cemetery site. Another researcher, in March, 1982 found the information while working in Kingwood County Count House, Preston County, West Virginia1. Well, it took me until last summer, July 2008, while vacationing in West Virginia, to finally make it to Union Cemetery in Preston County.
The Union Cemetery is located on a hill between Independence and Gladesville in the Lyon District of Preston County, West Virginia. It appears that a family member added the current tombstone as there is a smaller one with the initials SRV directly in front of the newer marker.
Thank goodness for modern technology and my brother, Ken’s, Garmin. It directed us to the cemetery without any mistakes. Once there, the search was on. It was my husband, Ted, who first located Sarah’s marker. My husband indulges my cemetery wanderings for a brief amount of time, so his finding the marker quickly meant I could get the photos and be on our way! Although on this trip my two brothers were also along and they had more than a passing interest in the find.
Sarah R. McElroy was born on June 11, 1797,2 in Maryland to Thomas and Elizabeth McElroy (sometimes written Muckleroy). From early Monongalia County tax records, it appears that the McElroy’s removed to the Morgantown, (West) Virginia area between 1800-18043. They lived at the Forks of Cheat near Cheat Lake (which is exactly where we vacationed!).
Sarah married Jacob VanGilder on April 25, 1825 in Monongalia County4. The Van Gilder’s had four children: Eliza J VanGilder, John Oliphant VanGilder, Mary Isabel VanGilder, and Rebecca A. VanGilder. Jacob died before 1840, leaving Sarah to raise and provide for the four children.
Shown on the 1850 census, Sarah is living in the Eastern District of Monongalia County, (West) Virginia with her two daughters, Eliza J. and Rebecca A.  None of them are working.  Sarah lists the value of her owned property as $1,800.
To date, I have not found Sarah's 1860 census record.
In 1870 and 1880, Sarah was living with her daughter, Eliza J. VanGilder Jenkins and family in Prunty Town, Taylor County, West Virginia.

VanGilder, Sarah, died Feb 8 1881, in Taylor Co, from fall on ice, age 84, parents unknown, occupation is housekeeping, consort of Jacob, informant was Frank Jenkins, son-in-law.
As shown on the death record, Sarah died on February 8, 1881 from a fall on the ice in Grafton at age eighty-four.  Since she died in Grafton, the question came to mind, why was she buried in this small cemetery, in rural Preston County? Perhaps the answer is that her youngest daughter, Rebecca VanGilder Church lived in the Lyon District and Sarah chose to be buried there. I did not look to see if Rebecca Church was buried in that cemetery…perhaps on another visit. 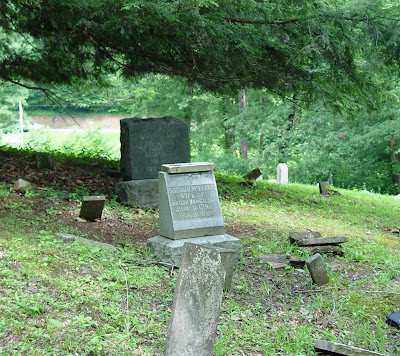 Sarah VanGilder's tombstone is located under a tree near the top of the hill on the left hand side of the cemetery. The burial markers surrounding Sarah are broken and illegible. Perhaps her daughter's marker or other family members are among them. There was also a broken grave marker sitting on top of Sarah's.
Sarah R. McElroy VanGilder on Find A Grave
Updated September, 2022