Bound for Mom: Milepost #1--A Journey of Firsts

Beginning March 25, 2009, Geneabloggers will be leading a journey called Bound for Mom. The first mile post: March 25th – A Journey of Firsts. Moms go far and along the way there are so many “firsts” such as first date, first love, first home, first child, and more. Take all of these beginnings and bundle them up into a story of how your Mom got started. 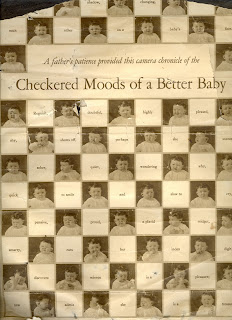 My Mom's FIRST infant photos were featured in a magazine page. The photographer was her uncle Alfred Walter Stark, Pittsburgh, Pennsylvania

My Mom, Martha Jean Stark Hughes was the FIRST and only child. Born on December 4, 1921, in Pittsburgh, Pennsylvania, the daughter of Charles Edward Stark and Martha Marie Frederick. As you can see, Mom and her Mother both shared the same FIRST name. She was the youngest of her generation as her parents were in their 40’s when she was born. My mother grew up in the town of Avalon, Pennsylvania outside Pittsburgh. Mom loved animals and her FIRST dog was named Corky. Mom had a passion for cats. Her FIRST cat was Skitter Cat, which was actually given to me by a boyfriend in the mid 1960's. She did not like dolls, but I know that her FIRST one was a Patsy Ann, popular at that time. I don’t know who her first love was, however she and my Dad went to school together from FIRST grade through high school. My Dad was her FIRST (and only) husband and they were married on November 23, 1943.

One of my mother’s talents was theater. She FIRST became enthused about acting when she won a local speech competition in Avalon as a youngster. Her FIRST acting on a stage came in high school with two class plays. Mom loved to act. She was chosen for shows in Wooster College and after she was married she acted in the local church and community productions. Her FIRST lead for the Hiland Players was in The Royal Family. In the 1970, she was in her FIRST musical, Kismet. 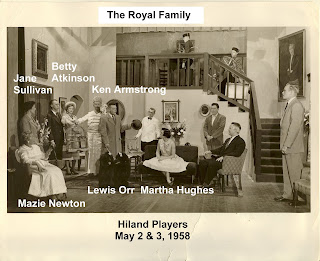 I am her FIRST child and three years after I was born we moved into our FIRST house in Perrysville, a town outside Pittsburgh. Mom bought our FIRST pet, a dog we named Spunky after we moved into the house. She had to learn how to drive when my Dad was called to duty in the Korean conflict, so her FIRST time driving a car would have been in the early 1950’s at age 29. 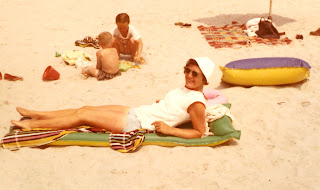 In 1978, Mom welcomed her FIRST grandchild, Aric Hughes Hiser into the world. Following her divorce in 1981, Mom purchased the FIRST home of her own in Lakewood, Ohio. Moving to Ohio brought with it many FIRSTS as she began a new life on her own—her FIRST credit card in her name, her FIRST self purchased car, and her FIRST self purchased condo. From my perspective the most important FIRST associated with the move was that it was the FIRST time she lived close to her grandchildren. Over the next 19 years she would become an important voice in their lives. 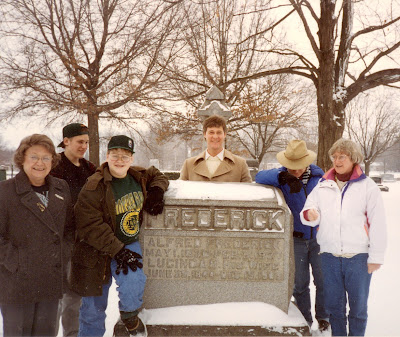 Mom with her sons, Ken and Jeff Hughes and daughter, Linda Hughes Hiser and two grandsons, Aric and Garrett Hiser on a genealogy outing in Columbiana County, Ohio on Christmas Eve.

Other blogs in this series:

Bound For Mom #4—The World is Not Flat