I think all genealogists have occasionally had an incident happen that makes them think that there is a tap…tap...tapping on their head from someone, perhaps a family member, who is now resides on some other plane.

When my Dad moved into St. Barnabas Retirement Apartments, one of his pleasures was to watch the wild turkeys wander about the grassy area behind the building. His enclosed porch looked out on the fish pond and the large expanse of grass. At various times of the day the turkeys would appear looking for food on the grounds. He would delight in taking photos, through the glass window, of the birds. Often, during phone calls, he would mention that he had seen the turkeys out back. 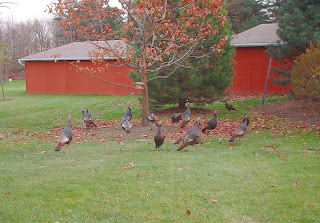 I think in the seven years that he lived at Barnabas, I only saw the turkeys twice. The first sighting was with Dad from the porch early one morning during a visit. The second was following a car trip to Avalon, Pennsylvania, the town where Dad grew up. It was the day after Thanksgiving. Dad’s health was in jeopardy as he was beginning to show signs of increased dementia. He wanted to take a drive….back to see the places he remembered as a child and teenager. As the family genealogist, this was a dream come true. My camera was in the backseat; a full tank of gas and off we went. Dad showed me where he lived on Ohio River Boulevard, where he liked to play, the church the family attended, where he and his father would swim in the Ohio River and on and on. It was a memorable excursion.

When Dad showed some signs of fatigue, we headed back. As we pulled into the St. Barnabas parking lot a flock of wild turkeys crossed in front of my car. Dad and I shared a hearty laugh, when he said, “I guess these birds didn’t make it to anyone’s table yesterday!” 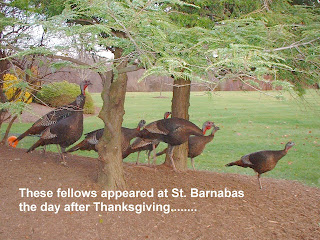 That was the last Thanksgiving we shared with Dad. His dementia advanced to the point by the following holiday that he was in assisted living. A year later he was moved into a nursing home and then on to his heavenly home. All the while he was living elsewhere; he continued to say how much he wanted to get back to Barnabas.

This past week, I closed up the St. Barnabas apartment. My stepmother continued to live there for almost a year and a half after my father’s passing. In February she moved to California to live with her daughter. As I finished the packing and cleaned out the empty rooms following the movers, I would occasionally peek out the windows to see if the turkeys might be outside. No turkeys appeared.

This morning I was up early to return home. I went up to the empty apartment for one final look. Waves of nostalgia swept over me as I closed up what was my home away from home for nine years.

The time had come to go. I grabbed my first load and headed out to the car. As I opened the back door to Barnabas I spotted them. An entire flock of wild turkeys were in front of my car. Three males and at least 20 females were wandering around the grass near the Bocce court. 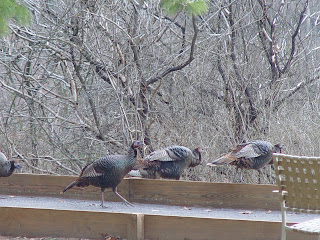 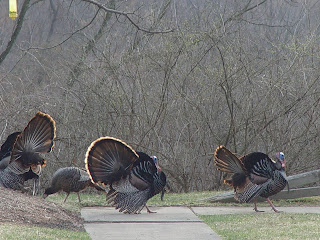 As luck would have it, my camera was in the first load. The males saw me and flared their tail feathers strutting around the females in a protective manner; however they stayed put and allowed me to shoot away with my camera for several minutes. When I returned with the second car load, they were gone.

Skeptics would say coincidence, but I choose to think it was a final farewell from my Dad as I was leaving his beloved St. Barnabas.