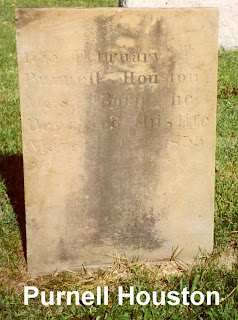 When I began writing this blog, I was going to give you the entire enchilada, but have decided to simply do the tombstone. Purnell deserves his own blog—he was quite a colorful character!

Purnell is my paternal gggg grandfather. His parents were Robert H. Houston and Mary Purnell. He was born February 1, 1755 in Somerset County, Maryland and died in Monongalia County, (West) Virginia on March 9, 1835. He is from a long line of Houston’s originating in Scotland, living in Pocomoke, Somerset County, Maryland about 1660, and moving to Milford, Sussex County, Delaware. Purnell moved his family to Morgantown, (West) Virginia around 1800.

He is buried in Mt. Union Cemetery, north of Morgantown, West Virginia on Route 119. He and his wife, Mary Houston were originally buried in what was called the old Hill Cemetery located in Morgantown. As the town and university began to grow, old pioneers from the cemetery were moved to Mt. Union.