Number 2 in a miniseries of posts at Genabloggers. Topic of this blog--was your Mom a great or inventive cook? Or perhaps cooking wasn’t her forte. No matter, gather up tales of food in your family and how Mom turned out great meals . . . or how she was an expert at dinner reservations!

I am somewhat reluctant to blog about this topic!! Not to cast aspersions on my Mother’s culinary expertise, but simply said….my memories of my Mom do not include her kitchen skills!!! Granted we always had good healthy meals….pretty much meat, potatoes and vegetables until later in her life, when casseroles seemed to become her special friend. This blog has been fun as I have had some assistance in the memories from my brother, Jeff and son, Aric. 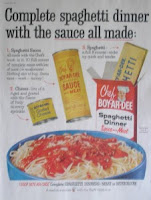 What I do remember, with some fondness, were Saturday night dinners on Washington Drive. My parents had a large group of friends. Back in the 50’s there was the ever popular cocktail party…..resplendent with the fabulous named cocktails, cocktail dresses and rhinestone jewelry for the women. My folks seemed to be at cocktail parties most Saturdays, so there was no time for making dinner. It was also before McDonalds and fast food/carry out restaurants. Fast food in the 50’s meant packaged Chef Boyardee spaghetti, canned Chung King Chop Suey, Spam, etc. I guess the Saturday excitement was not so much the food as watching Mom get ready for the evening; however we did become accustomed to spaghetti and chop suey and came to expect it on Saturday night. I’m sure my good friend, Anne, over at
Tastes of Henry, is laughing to know that I cut my early culinary chops with these family foods!

Then there was my packed school lunch. I think everyday in elementary school I carried a PB & J sandwich and either a Hostess Twinkee or Cupcake. Many a day in the lunch room, when I spied someone with a piece of homemade cake or pie, I wished it was in my lunch box. Later I came to learn that those same friends wished they had my Hostess treat!!!

There were also new food items not yet on the market for general consumption that ended up on our table. My father was a physician and way back in the early 50’s he was concerned about fat intake and cholesterol. I can remember when we stopped using butter and used a new fangled spread called margarine that came in a can---one that looked like today’s Crisco can. It didn’t taste great….certainly wasn’t butter, but was better for our hearts. At the same time, Mom stopped saving the fat from fried bacon. There was always a can of hard rendered bacon fat in the refrigerator. It was used to fry eggs or as a lubricant in the pan for any frying. Bacon fat became verboten!

As I telling my son, Mom’s grandson, about this food blog, he reminded me of Grandma’s Cheesy Cauliflower, which has become a staple of our Thanksgiving and Christmas dinners. Cheesy cauliflower was actually a mistake. Mom overcooked the cauliflower until it was mush, added some cheese whiz, and the cheesy cauliflower holiday tradition was born.

My brother, Jeff, sent along these memories of Mom’s meals. There was "Mother's delicious potato pancakes"--though I just remember the phrase and us laughing uproariously, I can't remember the story behind it. Another memory - she loved the "After Work Cookbook" because the recipes were all simple. Lots of casseroles with cans of soup as the base. I bought it myself when I went to school and used it for years (probably still have it somewhere). I think because the casseroles were her favorite, they became my favorite -- they still are. That makes Mom the guru of holistic and "green" nutrition before her time - no slab of meat each night with a veggie on the side. [This memory is different from mine as Mom began the casserole cooking after I had married and left home.] Also, when she no longer had to cook for us, she pretty much never cooked again - except for eggs and a few other simple things.

As it turned out, my Dad emerged as the gourmet cook in my “modern day” family, especially in his later years and in retirement. Probably genetics as his Mom and great grandmother were great cooks.

My Mom did love to eat out. After my parents divorce, luncheons out were common and anytime she could snag a dinner companion, she would take advantage of an evening meal out. 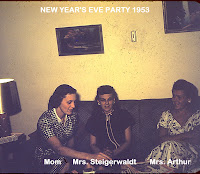 In the end, the cooking didn’t matter because my Mother was an expert at conversation, so all meals taken with her were special. She always seemed at ease with guests or family and was able to keep a good, lively conversation going. Folks were often entertained at our house. I am certain they accepted the invitation, not for the food, but to enjoy my Mother’s warm personality and ever present smile.

Other blogs in this series: