Known as Bill Olesen, he was the son of Christian Invart Olesen and Ferdinande Weiss. He was born in West Hartlepool, Durham County, England on March 18, 1880. Bill’s name seems to have gone through a series of variations over the years. His birth certificate reads Christian W. Olesen, early census reports list his as Wilhelm C. Olesen and on ship manifests and in the states it becomes William Christian Olesen.

Bill first arrived at Ellis Island on August 7, 1910 from Liverpool, England on the ship, Celtic. He was traveling with his sister and my great grandmother, Elizabeth Olesen Hughes. My great grandmother Hughes had already been in the US for four years and had traveled back to West Hartlepool to visit family and to accompany her younger brother across the pond. Bill probably lived with the Hughes family once he arrived in the US.

I do not know how long Bill stayed in the United States.  During the summer of 1920, Bill traveled from England to the Port of New York.  He was accompanied by his mother, Ferdinande Weiss Olesen, his married sisters, Emily Olesen Richards and Elizabeth Olesen Hughes and Elizabeth's husband, John George Hughes.  They arrived at Ellis Island on July 24, 1920 on the S.S. Aquitania.
Emily was detained for several days upon arrival as she was sick. The family stayed in on Long Island with the Ernest Olesen family and once Emily was released from the infirmary, Emily, her husband Rowland Richards, Bill and Ferdinande Olesen traveled to Woodlawn, Pennsylvania. Bill and Ferdinande lived with my great grandparents, John and Elizabeth Olesen Hughes. Emily and Rowland found a home in Monaca, Pennsylvania. 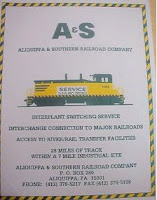 Bill was employed by Jones & Laughlin Steel Company. On the 1901 United Kingdom census and the 1920 ship manifest he is listed as a sawyer and on the 1910 ship manifest he is listed as a machinist,. An obituary in the Evening Times, Monaca, Pennsylvania dated December 3, 1946, mentions that Bill was retired from the Aliquippa & Southern railroad which was owned and operated by Jones & Laughlin Steel Company. It was an internal railroad that moved steel components between the various steel plants.
I have no photos of my great grand uncle Bill. I do have some accounts of him from my aunt and father. He was a quiet and gentle man who enjoyed having a hug from his grandniece. He smoked a pipe and enjoyed sitting on the porch. There is a story that Bill left England because he had "stirred up trouble" at his work with the workers against the employer. Perhaps an early striker! My aunt said, "Bill was a fire brand...an organizer for union.” 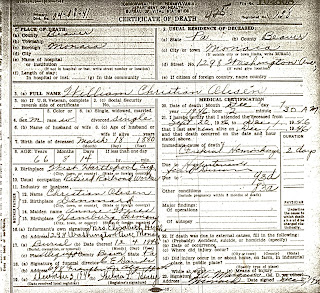