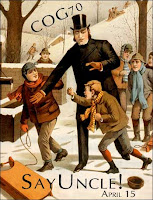 The topic for the 70th edition of the Carnival of Genealogy is: Uncle, Uncle! This edition is all about our uncles. Have you got a favorite or interesting uncle?

Meet Alfred Walter Stark, my Mom’s paternal uncle and my grand uncle. I never met Walter Stark, but have heard countless tales. Years back, when I was interviewing my mother for my genealogy files, I can remember her saying, “I wonder what ever happened to Uncle Walter?”

Alfred Walter, known as A. Walter or simply Walter, was the son of Charles Stark and Wilhelmine Catherine Schwarz Stark. He was born on May 15, 1884 in Lawrenceville, a neighborhood Pittsburgh, Pennsylvania.  There is a second blog on Wilhelmine Stark following the death of her husband.


Employed as a freelance photographer, Walter took the school photos for numerous Pittsburgh area school systems. I have photos he took for my mother’s Avalon, Pennsylvania elementary school, church plays and the one of my mother that appeared in a magazine.

Mom told me that family members felt that Uncle Walter must have played the ponies or indulged in some other form of gambling as his lifestyle was more than a photographer’s salary could provide. They would see him when he had money and then he would be gone for awhile. Walter had a nice car back in the 1920’s, a large home, went on nice vacations and he and his wife, Frances, were always well dressed.
He liked to have fun, enjoyed a good drink and the Ziegfeld Follies. Walter and Frances did not have any children, so they were free to go and do whatever they wanted. Family members knew that Walter would sneak his mother an alcoholic beverage whenever he visited. 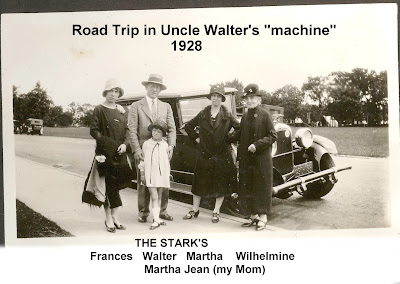 The death of their mother caused a division between my Grandfather Stark and his brother Walter. My grandfather decided to bury Wilhelmine in the same cemetery as her husband, Uniondale Cemetery, located on the North Side of Pittsburgh. Walter felt that his mother deserved a better burial place. The two brothers never spoke again; however, Walter did attend his brother’s funeral in Avalon, Pennsylvania when he died on January 24, 1945.

I was told that Walter took Frances to bathe in the Hot Springs.  Frances suffered from severe arthritis and it was felt that the waters would help her pain. I have found them both in Miami, Florida in the 1940's.  Perhaps the Hot Springs was an apocryphal story. Frances supposedly died there in the mid to late 1940's and Walter followed in 1962.

Walter kept in touch with two of his nieces after her moved away from the Pittsburgh area—Billie and Dorothy. Dorothy was contacted when he died in Miami to help pay for his burial as there was no estate. My mother last saw her Uncle Walter at Dorothy’s wedding in 1946.

Since my mother’s death and with my membership to ancestry.com, I have found out a few additional pieces of information about her Uncle Walter, but nothing as colorful as the stories she would tell about him.