The topic for the 71st edition of the Carnival of Genealogy is: Local History! As genealogists, we are used to tracing our ancestors and the history of the places they lived. But not all of us live where our ancestors did - do we take the time to see the history all around us? Use some of your investigative skills to research the house, street, or town/city where YOU live. Write about an interesting person, place, or event of local history. This edition of the COG will be hosted by Donna at What's Past is Prologue.

This has turned out to be of the more interesting topics to date.

To the best of my knowledge, I am the first of my family to have lived in North Olmsted, Ohio, so I have done little to no research in my own community. I have gone over to Butternut Ridge Cemetery to do a search for someone and did take a couple of photos. There are two older cemeteries in our community and like many towns; the tombstones are marked with the names of many familiar streets.

To find a topic for my blog I began by googling North Olmsted history and found several informative sites with old pioneer names. I chose one and began my research. I was uninspired. This family just wasn’t “doing it” for me! 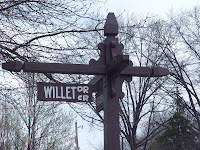 I went to work and on my way home an idea popped into my head. Since many streets are named for pioneers, former landowners or important people, I wondered why my street was called Willet Circle. My cul d’sac was built about 1978 in a subdivision that dates back to the late 1950’s or early 1960’s. The older streets are named for trees. Is Willet a tree that I have never heard of? Back to google---a willet is a bird!

Next stop: out to ancestry and the census reports. I plugged the surname Willet into the 1910 Ohio Federal Census and “what to my wondering eyes should appear” but George O. Willet, a lawyer, living in North Olmsted. EUREKA!!!! My blog idea was born.
George Ornan Willet, the son of William and Christina Sheckler Willet1 was born on April 6, 1863 in Shiloh, Richland County, Ohio2. On September 14, 1899 he married Bertha B. Hunter at Maytown, Lancaster County, Pennsylvania3.

George graduated from the National Normal University in Lebanon, Ohio with a B.S. and an A.B. degree in 1888. In 1892 he graduated from the Cincinnati, Ohio Law School and was admitted to the Ohio bar on May 28, 18924. Shortly after he was admitted to the bar, he formed a partnership called Olds & Willet and in 1908 became a member of the firm Willet & Pennell. Both were located in Cleveland, Ohio5.

George and Bertha did not have any children. The 1900 Ohio census shows them living in Cleveland, Ohio at 142 Arlington Street. Before 1909 the Willet’s moved to Lorain Road in North Olmsted. North Olmsted became a village in 1909 and George Ornan Willet was the first mayor. The date of the election was December 8, 19086. He served four terms from 1909-19157. I was somewhat surprised at the lack of information in the North Olmsted Library on George. I was only able to find a sentence here and there about his election and serving as mayor.

George died at his home in North Olmsted, Ohio on November 18, 19258. Of interest to me was that his listed address was Stop 18 Lorain Road. The Cleveland Southwestern System Interurban and electric railway once ran down Lorain Road, connecting Cleveland to Wellington, Ohio and passing through North Olmsted. I was able to find a few photos in one book at the library that listed various stops on the interurban. I would venture a guess that the Willet’s lived around the current day intersection of Columbia Road and Lorain.

George was buried in Plymouth, Richland County, Ohio. The name of the cemetery is not on the death certificate. I might have to take a day trip to Plymouth to satisfy my curiosity.

This has been fun.

The Willet Family from the photo files of D. Dewey Allen