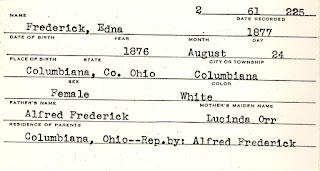 Edna was born on August 24, 1876 in the town of Columbiana, Columbiana County, Ohio.  Edna's father, Alfred Frederick reported the birth.
The Frederick family may have moved to Salem in Columbiana County in the mid 1880's and stayed there until the move to Allegheny County, Pennsylvania.  On the 1880 Ohio Federal census, Edna's father, was employed with the railroad.  He was probably not at home for long stretches of time.  They had to live in towns where the railroad station or the rail yard was easily accessible for his work.

I never met my grandaunt; however, my mother, had memories of her when Aunt Edna would visit in the 1920's and early 1930's.  Apparently, Edna and her sister, Martha Marie Frederick (my maternal grandmother) were not that close.  They would talk on the telephone.  My mother's Aunt Edna would bring her presents, dolls and stuffed animals when she was young.  She remembers her as having a somewhat domineering personality; however, also had a giving nature.  I wish I had more photographs of her.  I wish I had met her. 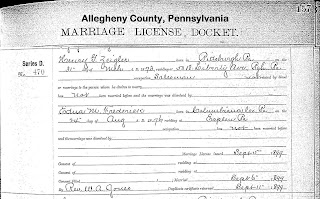 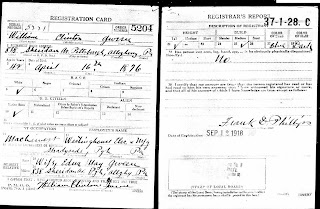 By September 12, 1918, Edna had married William Clinton Gween.  Bill was born on April 16, 1876 in Redstone Township, Fayette County, Pennsylvania.  He was the son of George Gween and Eliza Jane Harris Gween.  He was employed at Westinghouse as a machinist.  This was the first time I had seen Edna's middle name listed as May.  On her death certificate, it is listed as Mercedes.  The personal information was given by her daughter.
William C. Gween, head, rent a house at 838 Sheriden Avenue, age 43, married, born in Pennsylvania, both parents born in Pennsylvania, employed as a foreman at an electric company.
Edna M. Gween, wife, age 43, married, born in Ohio, both parents born in Ohio, employed as a clerk in a brokers office.
Mary A. Zeigler, step daughter, age 16, single, born in Pennsylvania, father born in Pennsylvania, mother born in Ohio, attended school.
The Gween home is in the Highland Park neighborhood of Pittsburgh, near the Pittsburgh Zoo and near the street where Edna and Mary lived with the Zeigler's in 1910. 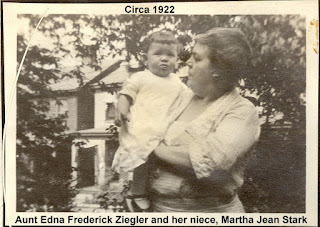 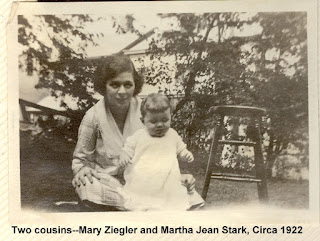 Aunt Edna Frederick Gween and Cousin Mary Alethea Zeigler make a visit to see, Martha Jean Stark, my mother, circa 1922.  When I identified the photos, I misnamed Aunt Edna as I did not know she was married to William Gween back in the 1920's. 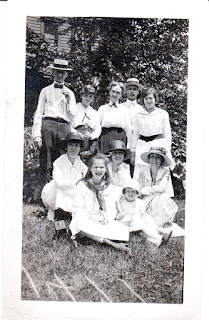 I had this photograph dated circa 1923.  Upon further inspection, I wonder if women were still wearing semi high top boots/shoes then?  My maternal grandparents are on the far left hand side of the photo.  Martha Marie Frederick Stark second row and behind her, Charles Edward Stark.  In the back row on the far right hand side are Mary Alethea Zeigler and her future husband, Robert Bruce Quinn.

This was an interesting find. I was wondering why I could not locate Edna and Bill Gween in Pittsburgh after 1920. Now I know why. They moved to Uniontown, Pennsylvania. 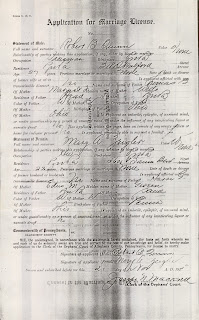 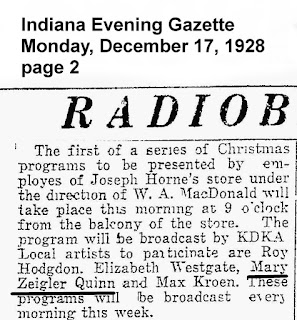 Mary Zeigler Quinn was employed by the Joseph Horne's Company in Pittsburgh  and performing in a Christmas holiday program.

I have not been able to locate Bill Gween on a 1930 census.  I wonder if Edna gave the information to the enumerator or the owner of the house?  Edna and her parents were all born in Ohio, not Pennsylvania.  Is she still married to Bill Gween? 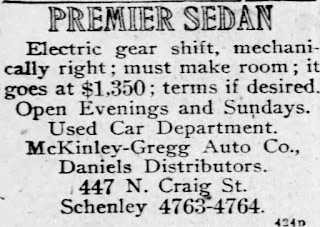 No listing for William Gween with Edna so far in the 1930's.  I think they simply separated.  Did not divorce.  Edna's current residence is a multi family apartment.  She may be renting the single bed and bath on the first floor front.  I will note that in a 1936 obituary for George Gween, William's father, that William is listed as living in Pittsburgh.
Edna Gween, renting an apartment at 540 Aspen Street, head, age 63, married, born in Ohio, lived in the same house in 1935, employed as a telephone operator at an automobile dealership, salary is $1,107.00.
There is no 1940 census for William C. Gween.  He has gone off the grid and from his obituary, returned to Fayette Township, Pennsylvania and was living alone in a rural house in New Salem.
Edna's daughter and son-in-law were living in Swissvale, Allegheny County, Pennsylvania in 1940.  Mary, age 37 was not working outside the home and Bob, age 43, was employed as a assistant metallurgist at a steel mill.  They lived in Swissvale in 1935, but not in the same house.  Bob's salary is $2,160.
It appears on the census that Bob rents the house at 611 Aurelius Street; however, I think he owns it with a mortgage.  Actually the Quinn's lived at 611 Aurelius in 1935, taken from his World War I Veterans Compensation Files.
In 1942, Bob was employed by the Heppenstall Steel Company and he any Mary were living at 1610 Oak Grove Street in Swissvale.  This information was taken from Bob's World War II Draft Card.

For the remainder of the 1940's I have found no information for Edna or her daughter and son-in-law.  I do know at a point in time, Edna moved in with Mary and Bob. 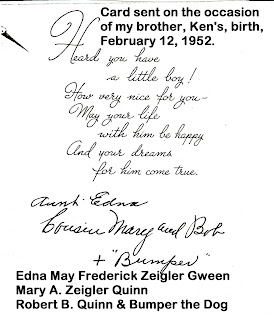 Although my mother had little contact with her Aunt Edna and Cousin Mary, they did send a congratulatory card to her on the birth of her son and my brother.  I believe they were all living together in 1952. 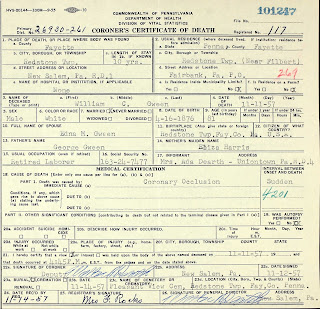 William Clinton Gween, age eighty one, died in his home, a rural residence in New Salem, Fayette County, Pennsylvania on November 11, 1957.  The death certificate indicates he had lived there for ten years.  Edna M. Gween is listed as his wife. 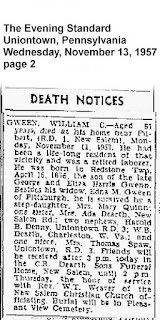 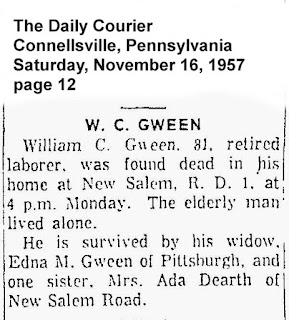 Bill's death was heavily covered in the local newspapers.  Edna M. Gween, of Pittsburgh, is listed in all three obituaries, as his wife.  In one, step daughter, Mary Quinn, is mentioned.
He was buried on November 14, 1957 in Pleasant View Cemetery, Smock, Fayette County, Pennsylvania. There is a Gween family plot, with his parents and siblings also buried there. 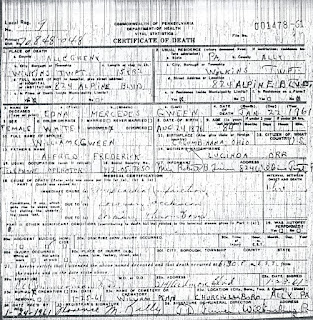 Edna Mercedes Frederick Zeigler Gween, age eighty four, died on January 22, 1961 at the home of her daughter and son-in-law, 824 Alpine Boulevard.
Edna's sister, Mrs. Charles E. Stark, is my maternal grandmother.  My nickname for her was "Teek".  When Aunt Edna died, I was thirteen.  I never heard anything about the death.  Teek, age eighty one, was somewhat crippled with rheumatoid arthritis and never learned to drive a car.  I wonder if she was able to attend her sister's funeral?
Edna was buried on January 25, 1961 at William Penn Gardens of Remembrance, Churchill, Allegheny County, Pennsylvania.  Possibly no grave marker. 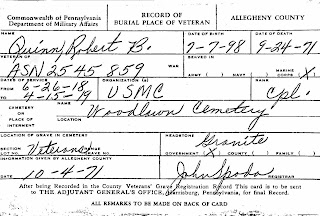 Robert Bruce Quinn died on September 24, 1971 and was buried in Woodlawn Cemetery, Wilkinsburg, Allegheny County, Pennsylvania.  I wonder why Bob chose Woodlawn as his final resting place?  I have not seen any relations buried there and his wife of forty four years, is buried in William Penn.
I did not cover Bob's service in World War I.  He enlisted as a private in the Aviation Reserve Corps in Ithaca, New York on January 5, 1918 and served until June 12, 1918 when he was discharged as a private first class.  Second he enlisted as a Marine on June 26, 1918.  He was promoted to corporal on October 25, 1918 and honorably discharged on April 15, 1919 at Paris Island, South Carolina.