In my recent attempt to gather all my research into one blog on each ancestor, my maternal great grandparents need attention.  Over the years I would blog in bits and bobs about these folks; brick walls, happy dances, burials, reunions, photographs and on and on.  Hopefully, this blog will draw it all together and fingers crossed, add something new.

There are two Frederick Families living in the area.  I descend from Nicholas and Catherine Frederick who came to Columbiana County, Ohio from Pennsylvania in the early 1800's.

Alfred F. Frederick and his twin brother, Albert Frederick, were born on May 1, 1836 in Salem Township, Columbiana County, Ohio.  (Incidentally, my maternal great grandfather and I share May 1 as a birthday).  The twins were the second and third children born to Joseph Charles Frederick and Mary Betz Frederick, joining a one year old sister, Melvina Frederick.  Joseph was engaged in the cooper trade, in Franklin Square, Salem Township, Columbiana County, Ohio.

Isaac Lepard, age 27, carpenter, value of real estate $500.00, value of personal property $231.00, born in Ohio
Sarah A. Lepard, age 24, born in Ohio
William H. Lepard, age 3, born in Ohio
Matella Lepard, age 1, born in Ohio
Alfred Frederick, age 24, clerk, born in Ohio
I have not been able to find out what Alfred's clerk job entailed.  Was he working as a clerk for Isaac in the carpentry shop?  Perhaps a clerk in the local grocery or hardware shop?  I was checking to see if the railroad had come through Attica in 1860 and perhaps Alfred was clerking at the station.  Attica was on a line later in the century. 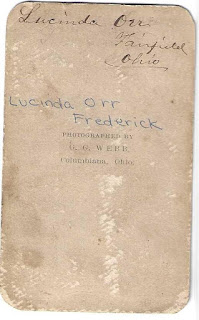 The carte de visite was photographed by G. G. Webb, Columbiana, Ohio. Hand written on the back, probably by Lucinda is "Lucinda Orr, Fairfield, Ohio.  With a little research I found that George G. Webb was in Columbiana in 1863 as an artist (1863 Civil War Registration Records).  He and his son, John Webb, were photographers operating from a studio in Columbiana, Fairfield Township, Columbiana County, Ohio.
Robert Bell, age 35, farmer, value of real estate $6000, value of personal estate $900, born in Ohio.
Dorothy Bell, age 26, born in Ohio.
William Longshore, 26, born in Ohio.
H.H. Musser, 20, laborer, born in Ohio.
Lucinda Orr, 15, born in Ohio, attended school during year.
The census in the same year, 1860, revealed that Lucinda Bell Orr had been "farmed out" to Robert Bell and his wife Dorothy Betz Bell, who were living in Elkrun Township.  Robert is listed as a farmer on the census; however, he was also a dentist.  I was told by a Frederick relation years ago that the Bells were good friends of Lucinda's mother, Nancy Agnes Cannon Orr.  Perhaps Lucinda's middle name "Bell" was in honor of that friendship.
How, where and when Alfred Frederick and Lucinda Orr met is unknown.  It is worth mentioning here that Dorothy Betz Bell and Alfred's mother, Mary Betz Frederick, were first cousins.  Perhaps there was a Betz family gathering in the early 1860's and Alfred and Lou met there. 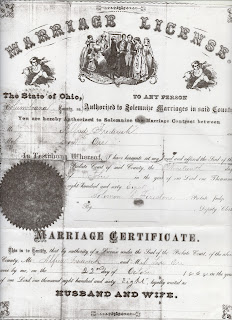 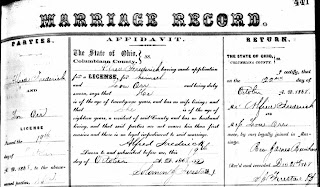 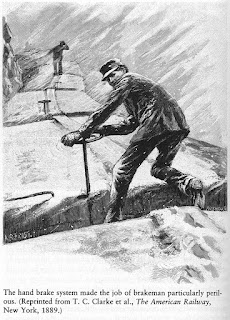 The brakeman would run from car to car on top of the train and turn a wheel on top of each car to stop the train.

This enumeration is the first that Alfred is listed as working for the railroad.  He remained on the rails his entire life and his two sons, Robert and Albert were also employed in various positions with railroads.

I included a couple of additional names when I cropped the 1880 census report above.  Notice the Robert Bell Family are enumerated directly under the Fredericks.  Lucinda lived with the Bells and was enumerated with them on the 1860 Ohio census.  Mrs. Dorothy Betz Bell is Alfred Frederick's first cousin 1 time removed. 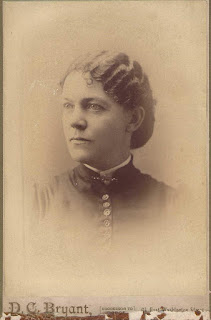 I identified this cabinet card as Lucinda Orr Frederick.  A deep dive into the approximate date this photograph was taken involved finding the photographer, D.C. Bryant.  Naturally, I figured he studio was located in Lisbon, Salem or Columbiana, Ohio.  Was I ever wrong.  David C. Bryant operated a photography studio in Indianapolis, Indiana.  The address on the card limits the years to 1886-1889.  Now the question, what was Lou doing in Indianapolis?  I have not yet located a relation she might be visiting.  Did the Frederick family live there for a brief period of time?

Albert "Burt" Frederick followed his father into employment with the railroad as a brakeman.  He was living as a boarder in the home of James A. McCready, an engineer with the railroad in Allegheny City,  Allegheny County, Pennsylvania.  On September 12, 1889, twenty year old Albert married  nineteen year old Georgetta "Georgia" E. McCready.  Georgetta was born on March 10, 1870 in Pittsburgh, Allegheny County, Pennsylvania to James A. McCready and Josephine Rawlings McCready.

One of the questions I have had, is when the Frederick Family left Columbiana County, Ohio and moved to the Pittsburgh, Pennsylvania area.  When Burt married in 1889, the Fredericks were still living in Ohio.

I have been able to piece the 1890's together through various newspaper articles and the obituaries of Alfred and Lucinda; although some of the time recollections in the obituaries is not 100% correct. 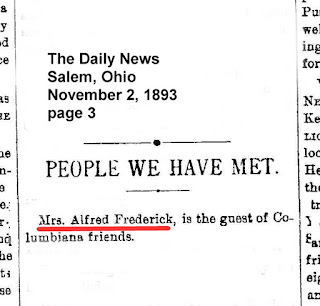 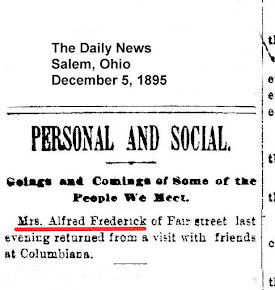 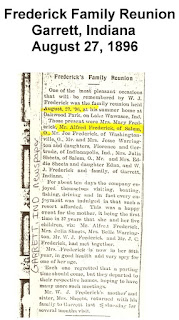 The family moved from the town of Columbiana, to the town of Salem in Columbiana County, in the early 1890's. From two newspaper articles, they lived on Fair Street. 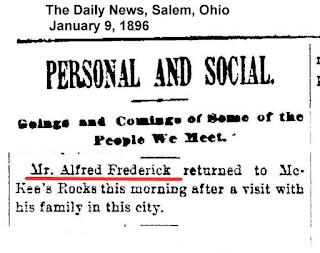 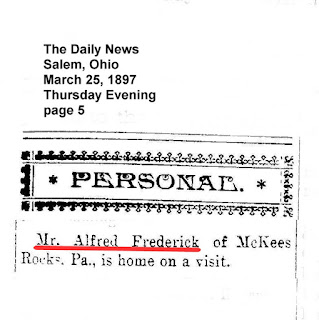 I wonder if Alfred is actually living in McKees Rocks, boarding there, while his family lives in Salem, Ohio.  It makes sense as he would be on Pittsburgh and Lake Erie trains running between Pittsburgh and Fort Wayne, Indiana. 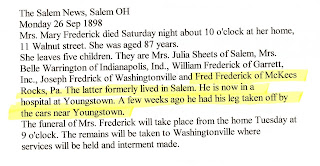 This was a shocking obituary.  I learned that my maternal great grandfather had one of his legs removed during an accident in Youngstown, Ohio, while he was working as a brakeman.  Again, he is listed as living in McKees Rocks, Pennsylvania.  Is the entire Frederick family living there now?  By the way, my maternal great great grandmother, Mary Betz Frederick was not buried with her husband, Joseph Charles Frederick in Washingtonville as mentioned in the obituary.  She is buried in Franklin Square. 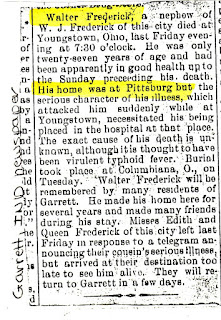 Alfred and Lucinda experienced the horrible loss of their son, William Walter Frederick on February 29, 1899 in Youngstown, Mahoning County, Ohio.  The obituary mentions that his home was in Pittsburgh, which leads me to believe that the family has now relocated to that area.

No doubt now, The Frederick Family is living in the borough of Esplen, Allegheny County, Pennsylvania.  A small neighborhood sandwiched in between McKees Rocks and Shearden.

Alfred Frederick, head, born May 1836, age 64, married 32 years, born in Ohio, both parents born in Ohio, employed as a switch tender, renting a house at 614 River Avenue in Esplen.

Great family information enumeration. Alfred continues to work as a switch tender for the railroad, at age 64, missing a leg. The switch tender was the employee who threw the switches to change the location of the tracks.  Alfred had a house across from the railroad tracks in Esplen and would have been able to work locally.
Robert Frederick followed his father into employment with the railroad.  Alfred's oldest son, Albert was also a railroader.
My maternal grandmother, listed as a "scool" teacher.  She never mentioned teaching.
And then there is my maternal great great grandmother, Nancy Agnes Cannon Orr McCormick.  Without the 1890 census, I have no idea if she was living with one of her living children, or on her own.  How long had she been living with her daughter, Lucinda?  Was she able to visit her sister, Mary Cannon Hoffstot, who was living in Allegheny City, not too far away?  Mary died in September, 1900, was Nancy able to go to the funeral?  This is the last document I have found for my great great grandmother.  I have no idea when and where she died or where she is buried.
The Three Face design was produced in Pittsburgh beginning in the late 1800's at the George Duncan & Son's Factory.  The designer was John Ernest Miller, a mould shop superintendent and designer.  His inspiration for the design of the face was his wife.
I was told that Lucinda had a collection of Three Face and after her death, her son, Robert Bell Frederick, stored the glassware.  Apparently, when Bob died, his wife, Mary Alice, gave one piece to her granddaughter as a keepsake and the remainder went to the Salvation Army.

I have a small collection of sterling silver "F" engraved teaspoons.  Again, more pieces from my maternal grandmother's estate that have survived for over a century.  Alfred and Lucinda had some nice "house wears". 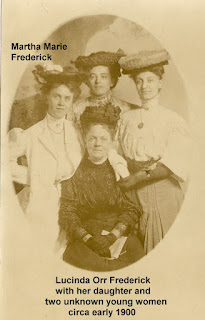 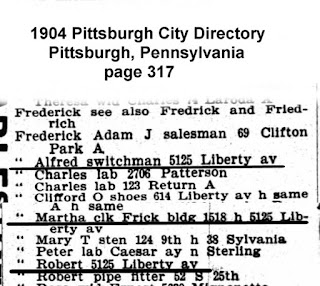 The Frederick's have moved up into the Pittsburgh area in the Bloomfield neighborhood.  Alfred continues to work as a switchman and my maternal grandmother is a clerk at the Frick Building.  Shockingly the house they lived in at 5125 Liberty Avenue has survived.

Lucinda and her brother Matthew Thomas Orr kept in touch over the years.  I have not seen Alfred Frederick listed as a conductor.  Must be journalistic license.
On June 20, 1906, thirty two year old Robert Bell Frederick married twenty five year old Mary Alice Bradley in Pittsburgh, Pennsylvania.  Mary Alice was born on October 1, 1880 in Pittsburgh, Pennsylvania the daughter of William Bradley and Mary Elizabeth Pickering Bradley. 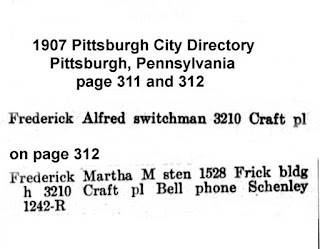 The Frederick's have moved closer to the Monongahela River in Pittsburgh in the South Oakland area.  The house no longer exists; however the street nearby, Ophelia, may have the same housing stock as Craft Place had in the day.  They are single family brick homes, many with porches.
Alfred, at age seventy one, continued to work as a switch tender. My maternal grandmother was employed as a stenographer at the Frick Building.  At the time, the Frick Building was the largest in the city, having twenty floors.  Stenographers were typists and it was a more skilled job than a secretary. 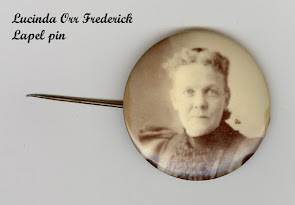 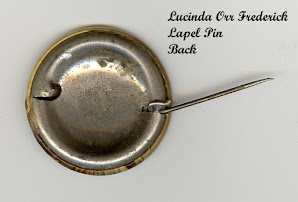 This is a curiosity.  The photo pin (photo button) was found in a small leather jewelry box among my maternal grandmother's estate.  A pin with her mother's photograph.  Apparently, in the early 1900's, photo buttons were popular. 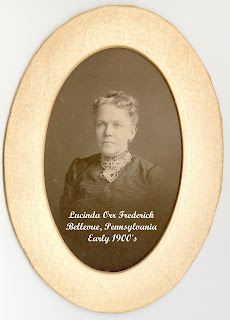 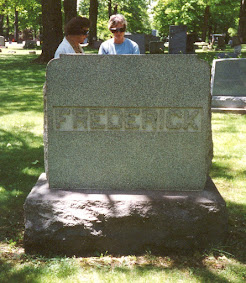 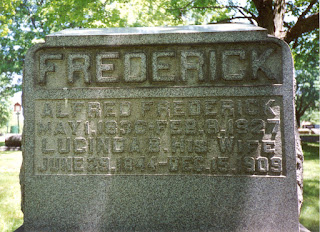 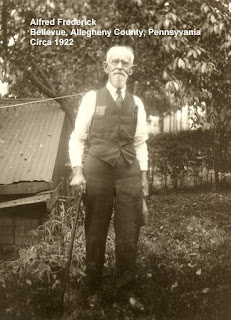 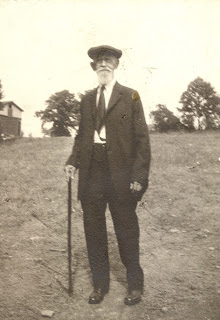 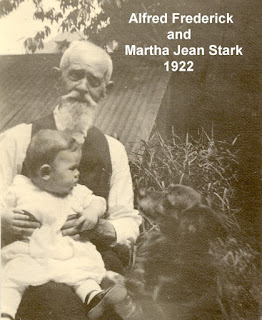 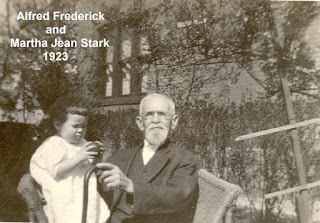 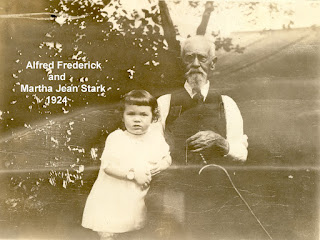 The photographs ended in 1924.  It took me many years of searching to find out what happened to my maternal great grandfather since he did not die until 1927.  I could not locate a death certificate in Allegheny County.  As more records were added to ancestry.com, at long last I found him.  He was sent to the Railroad Men's Home in Highland Park, Illinois and died there on February 9, 1927 at age ninety. 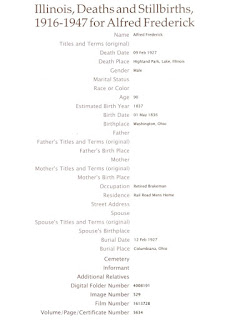 Alfred F. Frederick was buried beside his wife, Lucinda Bell Orr Frederick in Columbiana Cemetery, Columbiana, Columbiana County, Ohio.
What a wonderful surprise to find this article.  From Alfred's obituary I learned that he was a Mason.  From this I found out that Alfred had been employed for forty years with the Pittsburgh & Lake Erie Railroad and that the name of the Home was Home for Aged and Disabled Railroad Employees of America.
Children of Alfred F. Frederick and Lucinda Bell Orr Frederick:

In 1997, a relation, Ted Frederick, sent me a comprehensive listing of the descendants of Nicholas and Catherine Frederick.  My link must have been done in the early 1900's, although even late 1890 events are not listed.  Of interest is Alfred's nickname of Nick.  I have also seen Fred.  And, my maternal grandmother referred to as Mattie.
There are numerous blogs on Flipside for the Fredericks.  The alphabetical listing is a good resource as is the search engine.  Below are direct links for Alfred and Lucinda.
Alfred Frederick and Lucinda Orr--Marriage Record--Fearless Females #4