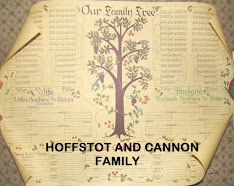 My maternal great great grand aunt, Mary Cannon was born in 1821 in Columbiana County, Ohio.  She was the daughter of Lindsey Cannon and Elizabeth Fife Cannon.  Mary's father was purchasing property in St. Clair Township in Columbiana County, Ohio between 1818-1821.  One piece of land would become Cannons Mills, where she spent her formative years.

Mary was a middle child in the Cannon family.  She had four older sisters and three younger brothers.  Certainly she would have been an active participant with the household and farm chores.

I have not located a 1850 Census report for the Hoffstot family.  I believe they were living at Cannon's Mills during most of the 1850's.  One child, a son, John Lindsey Hoffstot, was born in 1852 in Ohio. 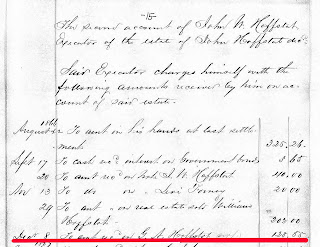 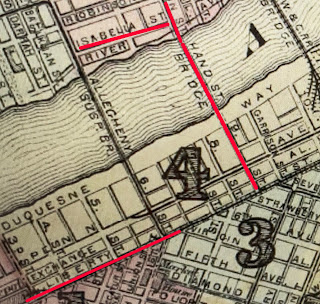 The Hoffstot's have moved into their new home at 66 Lincoln Avenue in Allegheny City. The street was rather short in 1880 and as it elongated, the house numbers began to change. By the 1900 census the house number was 841 North Lincoln Avenue. Wealthy, prominent Pittsburghers owned homes on Lincoln Avenue, all with various servants employed.
Today, the house still stands.  A high school friend and photographer, who lives in the area (now the North Side of Pittsburgh), took the following photos for this blog.
The beautiful home stayed in the family until Ada Hoffstot sold it in 1903.  Although a rather dark and cloudy day, Randy captured the intricate architectural details.  I love reflections, and the bare tree branches on the street appear in the windows.  A precise history of 841 North Lincoln Avenue and it's owners is on the Allegheny West website.

This directory listing is somewhat confusing.  Actually Gideon's home is at 66 Lincoln Avenue.  The given residence address in this listing is the same as his son's business address in the 1888 directory.
This is the final newspaper article I was able to find for Gideon.  In fact, I was unable to find an obituary.  He was a very prominent man in business and social circles in Pittsburgh and must have had an extensive death notice.
Gideon Norton Hoffstot died at age eighty-two on August 24, 1894 in Allegheny County, Pennsylvania. He was buried in Allegheny Cemetery, Pittsburgh, Pennsylvania. There is a large Hoffstot grave marker with smaller, individual markers for the family. The entire family has a grave stone in Allegheny Cemetery.  I imagine Almira was buried in St. Clair Township, where she died; however her marker is in Pittsburgh.
Gideon left a very explicit will outlining his properties and the distribution of his estate.  The house was to be his wife's home and following her decease, would go to his daughter, Ada.  Son, Frank was the trustee.   Gideon's wife, Mary Cannon Hoffstot, daughter, Ada  Hoffstot and son, Frank Norton Hoffstot were executors.  As trustee, Frank was to sell what properties were needed to maintain the house and pay annual stipends to his mother, Mary and sister, Ada.  Gideon also provided for money to be set aside for his grandchildren's education.  If Frank predeceased his sister, Ada, then she would become trustee.  If both Hoffstot siblings were deceased, then the trusteeship would revert to Frank's wife.  Gideon wanted to keep the money in the family. 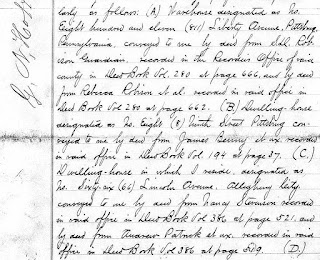 Mary Cannon Hoffstot, age seventy-eight, died at her home on September 26, 1900. She was buried beside her husband and deceased children in Allegheny Cemetery, Pittsburgh, Pennsylvania.
Mary's sister and my maternal great great grandmother, Nancy Agnes Cannon Orr McCormick was enumerated with her daughter, my maternal great grandmother, Lucinda Orr Frederick, on the 1900 Pennsylvania census.  They were living down the Ohio River from Allegheny City in Esplen Borough.  I wonder if the two sisters ever visited or if Nancy attended her sister Mary's funeral?
*********************
I will admit, I went down the provable rabbit hole with this family.  Pittsburgh is my hometown and my fascination with the rich and powerful got the better of me.  The Hoffstot Family, although I had not heard the name before this research, were members of the "blue bloods" of Pittsburgh and New York.
Frank Norton Hoffstot became a millionaire banker and President of Pressed Steel Car Company. He moved from Pittsburgh to the New York City area living in a huge mansion, that he built, on Sands Point, Long Island named Belcaro. In 1909, there was a bloody strike at Hoffstot's Pressed Steel Car Company in McKees Rocks, Pennsylvania.  The plant referred to as "The Slaughter House" reportedly treated their employees and families with cruelty and extremely low wages.  In 1910 Frank was brought up on charges of bribery and conspiracy involving Pittsburgh politics. He was acquitted in May, 1911. Frank's first wife's sister, Anne Childs Shaffer, married Henry Phipps, Jr. a well known name in Pittsburgh.
Ada Hoffstot, was actively engaged in high society social circles.  Entertaining women for cards in the Lincoln Avenue house, trips abroad, spending summers in White Mountain, New York and Bretton Woods, New Hampshire and holding large receptions in Pittsburgh and New York.  She held a degree from the Pittsburgh Female College which became Chatham University.  Ada sold the family home in North Lincoln Avenue in 1903 and moved to New York City.  In 1910 she was renting a place at 15 West 59th Street, located across from the pond in Central Park.  In 1920, she was living at 131 West 59th Street near Fordham University.  Ada had two servants living with her.  In 1930, ninety year old Ada was living in an apartment at 1140 Fifth Avenue, New York near the Jacqueline Kennedy Onassis Reservoir.  She had two nurses and a cook living with her.  Ada never married.
Children of Gideon Norton Hoffstot and Mary Cannon Hoffstot
Additional information regarding Gideon Norton Hoffstot
The Hoffstots