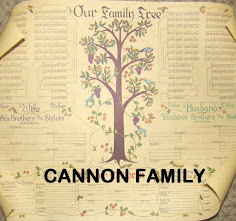 My maternal great great granduncle, probably named for his paternal uncle, was the son of Lindsey Cannon and Elizabeth Hepburn Cannon.  Matthew was born on the Cannon farm in Cannons Mills, St. Clair Township, Columbiana County, Ohio in 1824.

Matthew, the first born son, joined a family of four older sisters.  As he grew, he was probably working on the Cannon farm and assisting his father at the grist mill operation.

Matthew Cannon now owns the farm on Section 29.  His parents are also living on the property, although it is unknown whether they are all living together or in separate houses.

During the early 1870's both of Matthew's parents died.  Lindsey Cannon on December 26, 1871 and Elizabeth Fife Cannon on September 14, 1873.  Both are buried in Carlisle Cemetery very close to the Cannon farm.

Mary A. Canon, age 13, daughter, attended school, born in Ohio, both parents were born in Ohio.

On the 2nd and 3rd day of June, 1880 Matthew Cannon was enumerated in a Productions of Agriculture in Elkrun Township, Columbiana County, Ohio.

Of farming implements and machinery--$160.00

Neat Cattle and Their Products

Matthew Cannon has retired from farm labor and his son, Emmett F. Cannon is running the farm and is listed as the owner.  Of interest is that the census revealed that the Cannons had a fourth child. 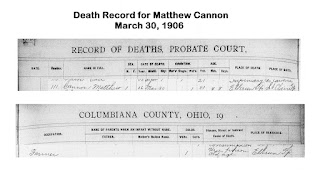 Matthew Cannon, died on March 30, 1906 at age eight-two on his farm in Elkrun Township, Columbiana County, Ohio. He was buried beside his wife, Elizabeth Hepburn Cannon in Carlisle Cemetery, Elkrun Township, Columbiana County, Ohio. Matthew is buried in the same cemetery as his parents.
Children of Matthew Cannon and Elizabeth Hepburn Cannon