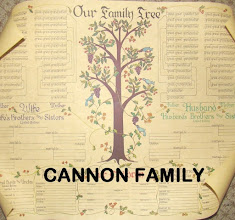 John Cannon, my maternal great great-granduncle and son of Lindsey Cannon and Elizabeth Fife Cannon, was born circa 1823 in St. Clair Township, Columbiana County, Ohio. John's father was purchasing land in the township and by the time John was born, Lindsey owned a total of 381 3/4 acres in sections 7 and 20. As John grew up, he would have been working in the various operations housed in Cannons Mills.
During the mid to late 1840's, Lindsey had lost his land in St. Clair Township and he, Elizabeth and two sons relocated to Madison Township and were living and working on a farm.  I am not able to read the twenty-seven year old owner's name.  Lindsey and his two sons, Matthew and John, are drovers, which are farmhands moving either cattle or sheep.
Lindsey Cannon, age 61, male, drover, born in Pennsylvania
Elizabeth Cannon, age 60, female, born in Pennsylvania
Matthew Cannon, age 25, male, drover, born in Ohio
John Cannon, age 23, male, drover, born in Ohio
Catherine Apple, age 18, female, born in Ohio

In March, 1855, John Cannon, Lindsey's son was taken to court by Sarah Armstrong for bastardy.  The case was settled in October, 1855.  A daughter, Malinda Ann Cannon, was born May 20, 1855.  I do not think that John and Sarah married.  In fact, I have not been able to follow John after this court document.  All I have is an Armstrong genealogical document with John Cannon and Sarah Armstrong listed.  Fact or fiction.  If they were married as the genealogical story suggests, there would not have been a common pleas court document.  The Armstrong account also lists John Cannon as dying in 1856.
There is a newspaper article that suggests that John moved on to New Mexico, remained single and died there around 1900.  I have not been able to verify that account.
Another idea came to mind when I saw a 1860 census listing for Eleanor Cannon, widow of John Cannon, brother of Lindsey.  Eleanor and John Cannon also had a son named John who is listed as having died in 1831.  There is a John Cannon enumerated with her in Illinois.  Could this be Lindsey's son, enumerated with his aunt and cousins, having left Ohio and heading west?
Child of John Cannon and Sarah Armstrong
I have; however, been able to trace Sarah Armstrong and John Cannon's offspring, my maternal first cousin three times removed, Malinda Ann Cannon.
Sarah Armstrong was born June 23, 1830 in Elkrun Township, Columbiana County, Ohio, the daughter of Andrew Armstrong and Hannah Shaw Armstrong.
Sometime between the common pleas court account and 1860, Sarah Armstrong removed to Lafayette, Allen County, Indiana.  She and daughter, listed as Mahala A. Carmon, are enumerated in the home of her older sister, Harriet Armstrong Bowman, married to Henry Bowman.  Sarah is listed as Sarah Armstrong. 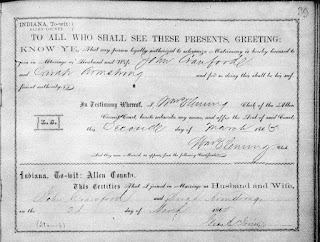 On March 2, 1865, thirty-four year old Sarah Armstrong married recently widowed, John Crawford in Allen County, Indiana. Sarah and John may have met at a family gathering as the Armstrong's, Bowman's and Crawford's were all from Elkrun Township, Columbiana County, Ohio.
Sarah married a farmer that was well respected and wealthy.  She had three children with John Crawford, one was deceased by the 1870 census.  She became the step-mother to four children John Crawford had with his first wife Eliza A. Bowman Crawford.
Malinda A. Cannon joined the Crawford family when her mother married.  She became a biological step-sister to; Harriett "Hattie" Crawford, Perry M. Crawford and Effie E. Crawford Dennis.
Sarah Armstrong Crawford died at age forty-three on January 3, 1874 in Indiana, probably on the family farm in Lafayette Township, Allen County.  She was buried in Glenwood Cemetery, Roanoke, Huntington County, Indiana. 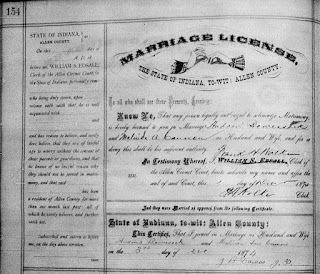 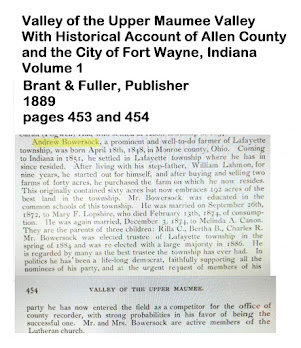 This biography gives us a peek into the entrepreneurial life of Andrew Bowersock.  He spent his married life with Malinda adding substantial amounts of land to his farm.  He was also politically active as a trustee. 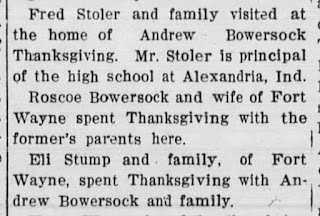 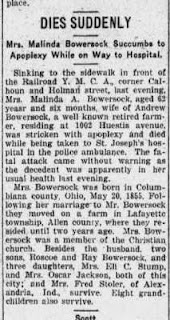 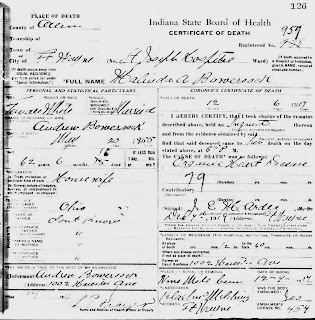 Malinda and Andrew had relocated to Fort Wayne, Indiana and were living at 1002 Huestis Avenue, probably enjoying city life and entertaining friends and family when Malinda, at age sixty-two, suddenly died on December 6, 1917, from heart disease.  According to the obituary, Malinda was in town when she died.  Malinda must have never talked about her parents, as Andrew, when filling in her personal information on the death certificate, simply said, "Don't know".  The obituary does list Columbiana County as her place of birth. 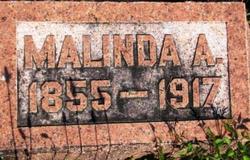 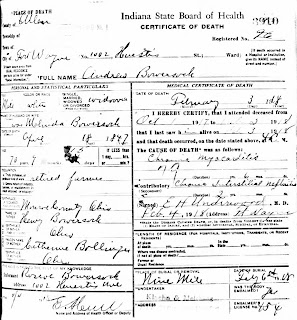 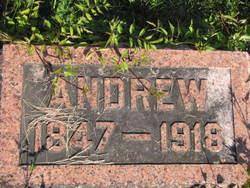 On February 3, 1918, at age seventy, Andrew J. Bowersock died at his home in Fort Wayne, Indiana.  He was buried beside his wife, in Nine Mile United Methodist Church Cemetery on February 6, 1918.
Andrew's first wife, Mary Lopshire Bowersock is also buried at Nine Mile and an unknown child, Rachey Bell Bowersock.  Perhaps Rachey was born to Andrew and Mary. 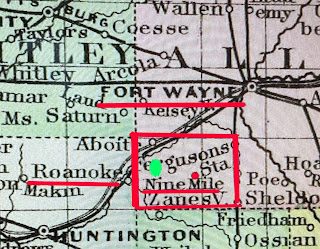 I do like a map to show the relation of where folks live/lived.  Allen County is in the pink.  Lafayette Township is in the red square.  The Bowersock property is about where the green oval is located.  Andrew and Malinda also lived in Roanoke and Fort Wayne, all fairly close to their property in Lafayette.  Nine Mile is underlined and marked with a small red dot, where they are buried.
Children of Andrew J. Bowersock and Malinda Ann Canon Bowersock: