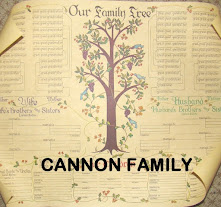 I have realized that I have written about my maternal Great Great Great Grandfather Lindsey Cannon in a fairly herky-jerky manner. I think it is time to finally put all the information in one place. Lindsey Cannon and Elizabeth Fife Cannon are my maternal 3x great grand parents. Sometimes Lindsey is spelled Lindsay and Cannon is spelled Canon. Then there is also the times that census readers call it Cameron.  A frequent research challenge of all genealogists--numerous name spellings. 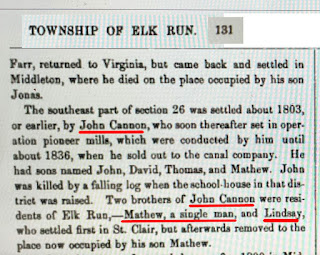 The four Cannon siblings, John, Lindsey, Matthew and Thomas, relocated from Fayette County, Pennsylvania to Columbiana County, Ohio, taking advantage of the April 15, 1800 Harrison Land Act.  Thomas Cannon is not mentioned in this article because he purchased land in Middleton Township, Columbiana County, Ohio.  Also, Matthew Cannon was not a single man as outlined in his blog on Flipside.

Various Ancestry sites list Thomas Cannon of Fayette County, Pennsylvania as the father of the four siblings.  He died in 1798, which may have been the trigger that caused his four sons to move west into Ohio.

Of interest to me is an Agnes Cannon who purchased land abutting John Cannon in Elkrun Township.  A Nancy Cannon is listed in the Horace Mack book, A History of Columbiana County, Ohio, page 132, as a householder in the area south of the Middle Beaver (River) in 1838.  Her name would have been Nancy Agnes Cannon, the name given to my maternal great great grandmother by my maternal 3xgreat grandparents, Lindsey and Elizabeth Fife Cannon.  I should mention that Elizabeth had a younger sister also named Nancy Agnes Fife.  John A. Cannon had two daughters which are not named and Thomas Cannon named a daughter Nancy.  Who was the Nancy Agnes Cannon purchasing adjoining land to John A.?  The men's mother?  A single sister?

Back to my maternal 3xgrest grandparents.

Lindsey purchased three pieces of land in Columbiana County in 1805 from the Steubenville Land Office. 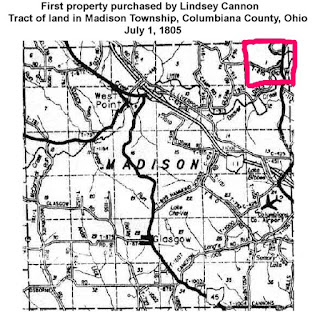 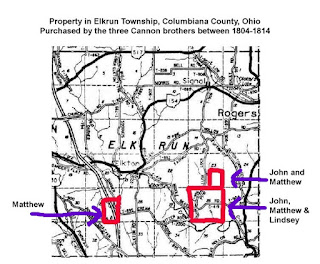 On August 31, 1805, he purchased land in Columbiana County, Elkrun Township, Section 26, Certificate 1687.  This piece of property adjoined his brother, John Cannon's land, in Section 25 and added to the property he purchased from his brother in April.

Lindsey was not purchasing property from his home in Pennsylvania, he was living in Columbiana County, Ohio in 1805.  He was witness to what appears to be a will of John McMillian dated August 19, 1805.  Note:  Lindsay Cannon.

In 1810, Ohio did not have a census; however, there was a tax list.  Lindsey is listed as owning 159 acres in Elkrun Township, Columbiana County in Section 26, once owned by Matthew Cannon. 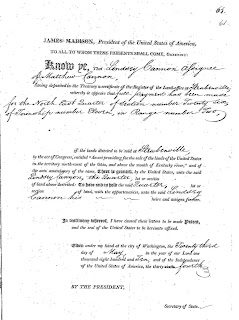 On May 23, 1910 Lindsey Cannon paid in full on the property transferred to him by his brother, Matthew Cannon, in 1805, in the northeast quarter of section 26 in Elkrun Township, Columbiana County, Ohio. 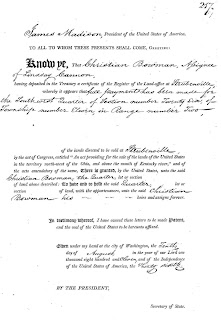 On August 10, 1811, Lindsey sold his land on the southwest quarter of Elkrun Township, Columbiana County to Christian Bowman. 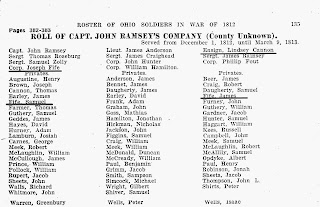 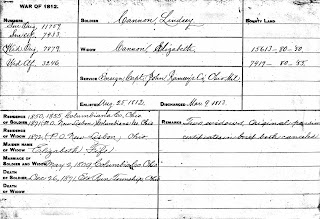 Lindsey enlisted as an ensign in Captain John Ramsey's Company, Ohio Militia, Columbiana County, Ohio for the War of 1812 serving from August 25, 1812 to March 9, 1812.  Also underlined are three of Elizabeth Fife Cannon's brothers who served in this company.   Interesting that the pension was cancelled due to the fact that two different names for his wife were listed.  Elizabeth Cannon is Elizabeth Fife.

In numerous early county records, Marsh and March were used interchangeably.  I found this curious that John and Philip Marsh/March went to live with Lindsey Cannon following their father's death.  Lindsey's oldest daughter, Elizabeth Cannon married John March.  It would be of interest to me to know if John Marsh is John March who became Lindsey's son-in-law. 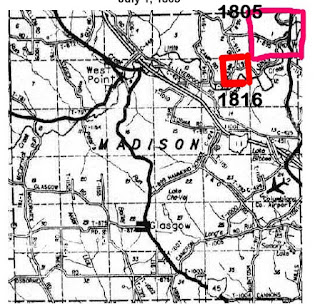 Lindsey was somewhat of a land ownership entrepreneur.  The 1816 Columbiana Tax report lists him as owning 160 acres in northeast section 11, of Madison Township.  He purchased this acreage from John Smith.
While Lindsey and Elizabeth Cannon were making their home in Madison Township, several children were born. 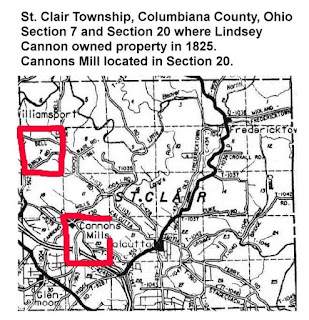 In 1821, Lindsey purchased 160 acres in St. Clair Township, northwest section 20 from George Wilson.  This was where Lindsey would make his living and raise his family with a village named after him, Cannons Mills.

The other pieces of property he owned in Elkrun and Madison Townships were probably sold; however, to date, I have not found documentation. 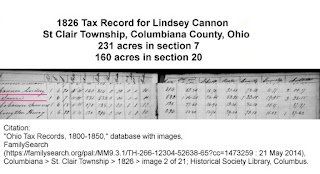 Lindsey owned both pieces of property in St. Clair Township from 1821-1831.
After 1831, his life was focused at Cannons Mills, where he operated a grist mill, saw mill and distillery.  Although this photograph is decades after Lindsey and his family lived there, it gives a glimpse into the area. 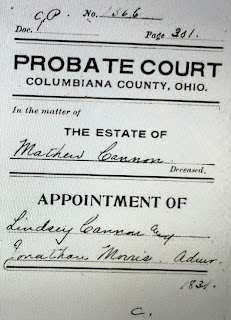 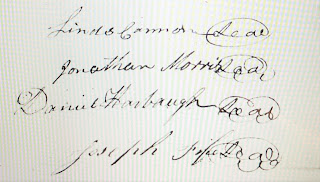 In 1831, Lindsey's younger brother, Matthew Cannon, died in Elkrun Township. Lindsey and both his and Matthew's his brother-in-law, Joseph Fife, were administrators of the probate.

Lindsey Cannon was a justice of the peace and above is one marriage that he officiated. Also during the 1830s, Lindsey Cannon, Esq. was listed with a group of men from St. Clair Township who wrote a proposal to the state senators and congressmen outlining their displeasure with the Whigs in government. Lindsey was a democrat of the old Jeffersonian school. 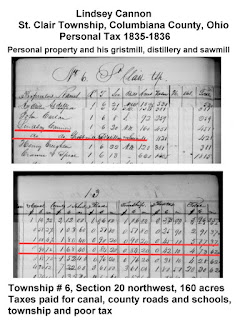 By 1838, Lindsey added an additional 60 acres to his property on the northwest quarter of Section 20 in St. Clair Township. 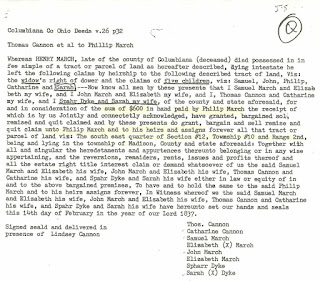 This 1837 court action regarding regarding a deed to Philip March lists the same sibling names as the 1814 guardianship notice above.  It was the reason I felt that the children in the guardianship were March not Marsh. Thomas Cannon, Lindsey's brother, married Catherine March.  Samuel March, Phillip's brother and wife Elizabeth.  John March married to Lindsey's daughter, Elizabeth Cannon.  Sphaar Dyke married to Sarah March.

The above newspaper biography of Lindsey Cannon outlines his rise and fall in Cannons Mills.  Unfortunately, his generous nature and a temperance movement contributed to the sale of his business and property. 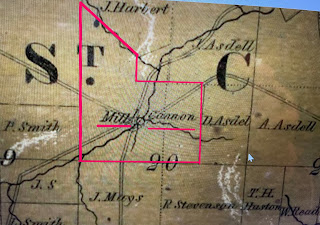 Lindsey Cannon's property and the mill marked on a 1840 St. Clair map.  Five roads leading to other townships in Columbiana County pass through Cannons Mills.  Longs Run looks to be a feeder stream into the Little Beaver Creek.  Lindsey's grist mill was located on it and used it to power the mill.
Lindsey's 1840 Ohio census report lists:
1 male age 10-15--John Cannon, would have been age 11
1 male age 15-20--Matthew Cannon, would have been age 16
1 male age 20-30--possibly Thomas Cannon
1 male age 50-60--Lindsey Cannon
1 female age 5-10
1 female age 15-20--Jane Cannon, would have been age 20-21.  Only daughter not married
1 female age 40-50--Elizabeth Fife Cannon
Down, but not out, Lindsey, Elizabeth and two sons have relocated to Madison Township and are living and working on a farm by 1850.  I am not able to read the twenty-seven year old owner.  Lindsey and his son, Matthew are drovers, which are farmhands moving either cattle or sheep.
Lindsey Cannon, age 61, male, drover, born in Pennsylvania
Elizabeth Cannon, age 60, female, born in Pennsylvania
Matthew Cannon, age 25, male, drover, born in Ohio
John Cannon, age 23, male, drover, born in Ohio
Catherine Apple, age 18, female, born in Ohio

In March, 1855, John Cannon, Lindsey's son was taken to court by Sarah Armstrong for bastardy.  The case was settled in October, 1855.  A daughter, Malinda Ann Cannon, was born May 20, 1855.  I do not know if John and Sarah married.  In fact, I have not been able to follow John after this court document.  All I have is Armstrong genealogical document.  Fact or fiction.  If they were married as the genealogical document suggests, there would not have been a common pleas court document.

Lindsey, Elizabeth and son Matthew have returned to Elkrun Township by 1860. Lindsey has purchased his deceased brother, Matthew Cannon's, farm in the southeast quarter of section 29 in Elkrun Township. Matthew's widow, Jane Fife Cannon owned and was living there when the 1850 census was taken. My thesis is that she died between 1850-1860 and Lindsey purchased the property from her estate. A number of Elizabeth's Fife family were living nearby.

Untangling this enumeration.  Elizabeth is Lindsey's wife, Elizabeth Fife Cannon and she was born in Pennsylvania, not Ohio.  Jane is Lindsey and Elizabeth's widowed daughter, Jane Cannon Oglevie, who is enumerated with her parents in Elkrun Township following her husband's death after the 1850 census.  In 1850, George Oglevie and family lived in Elkrun Township.  He was a merchant and had $1000 in real estate. Caroline, Isabel and Catherine are Jane's daughters.  Matthew Cannon, is, Lindsey and Elizabeth's son.

Lindsey Cannon died at his farm in Elkrun Township at ninety-two years of age, the day after Christmas, December 26, 1871.  The newspaper article above is all I have found.  No obituary. 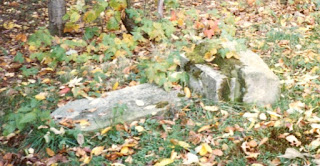 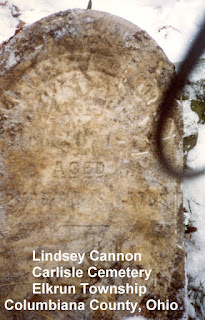 Lindsey Cannon was buried at Carlisle Cemetery, slightly south west from his farm.  The photograph above, I took when my mother and I first visited the cemetery back in the fall of 1993.  We went back as a family on Christmas Eve, with a crowbar and my brother, Ken, up righted his maternal 3x great grandfather's tombstone.  The shadow of the crowbar is shown on the tombstone picture.  I was not aware at that time, that Lindsey was my direct ancestor.  I thought I was connected to his brother John A. Cannon.  I definitely need to return to the Carlisle Cemetery to try to get better images of all my ancestors buried there.

Lindsey's widow, Elizabeth Fife Cannon died at the Cannon farm in Elkrun Township on October 14, 1873.  She was eighty-four years old. 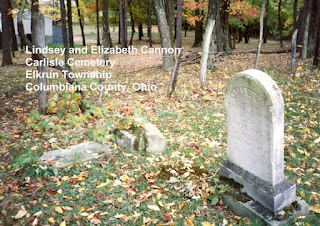 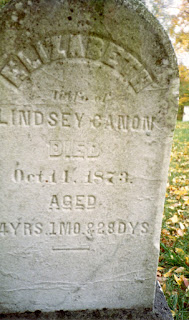 Elizabeth was buried beside her husband at the Carlisle Cemetery, Elkrun Township, Columbiana County, Ohio.  The cemetery is located alongside Roller Coaster Road.
A Wrap

All four Cannon brothers were early Ohio Pioneers.  Lindsey was well known and well regarded by the residents in numerous communities.  He was active in local politics, was a justice of the peace and an entrepreneur in business.  His village, Cannons Mills had a blacksmith, timber saw operation, grist mill and distillery.  Financially he did well.  His downfall was his trust in his fellow neighbors, lending them credit on purchases at the mill.  Also discontinuing the distilling of alcohol, probably put a dent in his income.  Lindsey cashed out, sold his property, went to work for a livestock farmer, rebuilt enough capital to purchase his deceased brother's Elkrun property and began again.

The Cannon brothers lived in Columbiana County while Native Americans were also settled in various areas.  There were no roads, homes or tilled land.  They helped build the townships, roads and canals.  They worked to form the local governments, marry the young and older couples, and provide residents with grain.  I am proud to call them all my relations and Lindsey and Elizabeth Fife Cannon my ancestors.

Other Lindsey Cannon Blogs on Flipside: