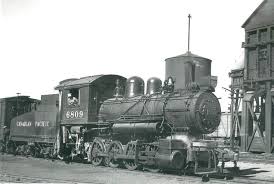 My maternal granduncle, Albert "Burt" L. Frederick, was one of my genealogical brick walls--"was" being the operative word.  I never heard a word about him and would not have known he existed except for his birth record and the 1880 Ohio census.  The stumbling block was looking for Albert Frederick.  When I found his mother's obituary I saw he was listed as Burt Frederick and living in Chicago.  Just the hint I needed.  Off and running. 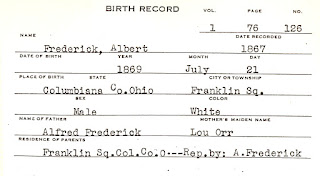 This is the only photograph I have seen of Burt.  It is cropped from a photo of the Frederick children.  Of his three children, only one had descendants and it is doubtful that additional photos of Albert exist.  The son, who had children, was born to Burt's first marriage and I am not all that certain he stayed close to his father, although as a young adult, he did live and married his first wife in Chicago.
Not too many years after this photograph was taken, Burt followed his father into employment with the railroad and relocated to Pittsburgh, Pennsylvania.  I do not know if he also worked for the Pittsburgh & Lake Erie Railroad Company like his father.  Pittsburgh was the headquarters and the rails did go to Chicago. 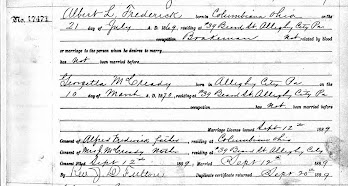 Albert L. Frederick followed his father into employment with the railroad as a brakeman.  He was living as a boarder in the home of Josephine McCready, in Allegheny City across the Allegheny River from Pittsburgh.  Josephine's deceased husband, James A. McCready was an engineer with the railroad and the McCready's ran a boarding house for Railroad employees as shown in the 1880 census.
On September 12, 1889, twenty year old Albert married  nineteen year old Georgetta "Georgia" E. McCready.  Georgetta was born on March 10, 1870 in Pittsburgh, Allegheny County, Pennsylvania to James A. McCready and Josephine Rawlings McCready.

Burt and Georgia welcomed their first child, a son, Raymond Alfred Frederick on May 18, 1891 in Pittsburgh, Allegheny County, Pennsylvania.  A second son, Harry Harr Frederick was born on July 12, 1894 in Pittsburgh, Allegheny County, Pennsylvania.  Probably both boys were born in Allegheny City which is the area where the Fredrick's lived.  Allegheny City later was annexed by Pittsburgh in 1907.
With the limited resources to research during the 1890's and early 1900's, it appears that the Frederick's lived in the Allegheny City area during their time in the Pittsburgh area.  Allegheny City is now referred to as the North Side (of Pittsburgh).  On a map from the early 1900's I have located all the streets and they appear to be located in or near the Manchester neighborhood on the North Side.  Tracks owned then by the Pittsburgh, Fort Wayne and Chicago Railway did run through Manchester.
On November 5, 1905, Albert L. Frederick and Georgia E. McCready Frederick divorced.   It appears that Georgia moved to Los Angeles, California taking her two sons. They were in California from 1905 until she married for a second time, on April 23, 1914 to Richard W. Harmon in Armstrong County, Pennsylvania.
I do want to mention that I was not able to find a 1900 census enumeration for Albert or Georgia and no 1910 census report for Georgia, Raymond or Harry Frederick.  Georgia does have Los Angeles City Directories beginning in 1905.

Burt L. Frederick, head, age 40,  married twice, married 6 years, born in Ohio, both parents born in Ohio, working on his own account as a yardmaster at a freight yard, renting an apartment at 5303 Dearborn Street, Chicago, Illinois.  Six families live in the apartment. All the men heads of the household are employed with the railroad.

According to Wikipedia, the railroad yard master is in charge of the activities in the rail yard.  Everything from switching the trains in the yard to different tracks to braking down the train to individual cars.  Over the years, Burt had served in many of the various forms of railroad employment and had the background to run the yard. 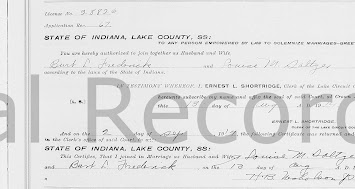 Burt L. Frederick and Louise M. Saltzer married on September 2, 1914 in Lake County, Indiana.  Did Albert have two wives named Louise?  Did Albert not marry the Louise Frederick of the 1910 census until 1914?
I have been unsuccessful tracking down Louise Saltzer, even using 1888 as her birth year and birth in Pennsylvania.  I have found nothing on her parents. 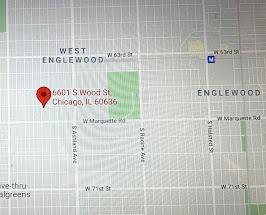 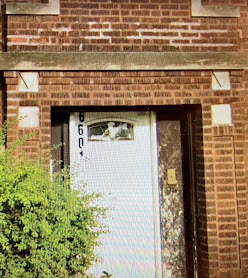 Bert Fredrick, head, age 51, born on Ohio, both parents born in Ohio, employed as a conductor with the railroad, renting the second floor of a house at 6601 Wood Street, West Englewood, Chicago, Illinois.

Louise's birth year is 1888 and the born in Pennsylvania matches; however her parents country of origin do not match the 1910 census.  Does that mean anything? 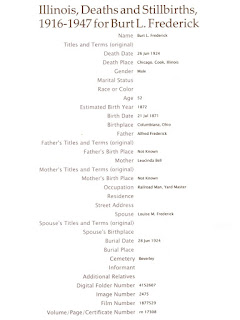 It was a red letter day when Illinois death information began to be posted out on ancestry.  Not only did I find this valuable piece of information, but I also finally found where Burt's father and my maternal great grand father, Alfred F. Frederick died.  Burt in Chicago and Alfred, not that far away in Highland Park.  I wonder if Burt ever visited his Dad at the Home for Railroaders located there? 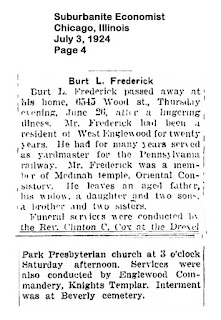 I have been rewarded with pulling the trigger on subscribing to ancestry's newspaper option and then adding the option of newspapers after about 1920.  Burt's obituary gave me a peek into his personal life and solidified that he and is family do connect to me.

Burt was buried in Beverly Cemetery, Blue Island, Cook County, Illinois  on June 28, 1924.  I added his information to Find A Grave back in 2010 when I found the death information.  In 2018 his grave marker was added under a separate listing.  The symbol shown n the marker is that of the Shriners.

I learned from the obituary that my grand uncle was very involved with free masonry in Chicago.

Often I end the blog with the death of the direct relation; however, I decided to continue on with Burt's family.

Albert's oldest son, Raymond Alfred Frederick was living in the Chicago area and married Dorothy Bohne on September 5, 1916.  Burt's first grandchild, Ruth Dorothy Frederick, was born on June 5, 1922 in Chicago.  Was Albert close with his son?  Did they gather for holidays?  His son's were raised by his first wife, primarily in California. 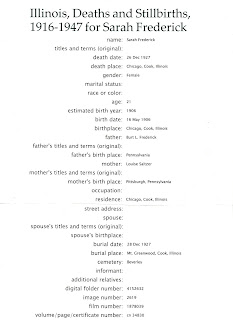 Three years after her father's death, Sarah L. Frederick, age twenty one, died at her home, 7350 South Halstead, Chicago, Cook County, Illinois.  Her parents are listed as Burt L. Frederick and Louise Saltzer.  The birth information for Burt is incorrect.  He was not born in Pennsylvania.

Sarah L. Frederick was buried at Beverly Cemetery, Blue Island, Cook County, Illinois  on December 28, 1927.  I have not visited the cemetery; however, suppose, Sarah is buried beside her father.  I do not know why her marker has her name as Sara since all the records I have list her as Sarah.

Louise Frederick, widow of Albert, now alone in Chicago as her daughter has died, found an apartment to rent at 2350 Halsted Street in Chicago for $65.00 a month.  Numerous other people are also renting rooms in the building.  Louise is listed as a widow and is not employed. 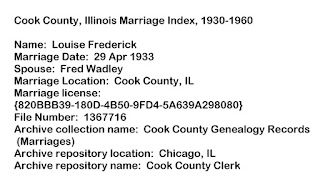 On April 29, 1933, Louise Marie Saltzer Frederick married divorcee, Frederick "Fred" Wadley in Cook County, Illinois  Fred had five children children from his first marriage to Edna Rebecca Evison.  One child, a daughter, died as an infant.  Frederick was born November 12, 1887 in Kane County, Illinois.  He was the son of Lester S. Wadley and Mary May Quinn.

The 1940 Illinois census lists Fred and Louise living at 7922; however, the enumerator did not list the street.  They lived in the same house in 1935 and 1940.  Fred was employed with a building contractor as a carpenter.

Louise was buried at Beverly Cemetery, Blue Island, Cook County, Chicago.  I assume that she is buried beside her first husband, Albert "Burt" L. Frederick and her daughter Sarah L. Frederick.

Fred Wadley died in 1972 and was buried in the Wadley/Evison plot in Fairmont-Willow Hills Memorial Park, Willow Springs, Illinois along with his divorced wife and several of their children.

Other Blogs on Flipside for Albert L. Frederick: