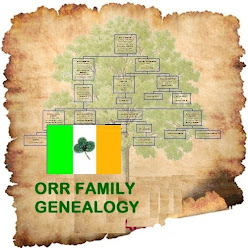 Matthew Thomas Orr grew up on a farm.  I have thought that it could have been the land of his maternal uncle and aunt, Matthew Cannon and Jane Fife Cannon, in Section 29 in Elkrun Township, Columbiana County, Ohio.

Matthew Orr was only twelve when his father, William Morland Orr died in 1849.  The Orr's were enumerated with Uncle Matthew Cannon's widow, his Aunt Jane Fife Cannon, on the 1850 Ohio Census.  Matthew had willed the farm to his wife.  Perhaps Matthew Thomas Orr was named for his maternal uncle, Matthew Cannon.

On the 1860 Ohio Census, Matthew is listed as living with his mother and sisters in Elkrun Township and he is farming.  Matthew's grandparents, Lindsey and Elizabeth Fife Cannon have purchased the land in Section 29 and are living and farming there in 1860.  Perhaps Matthew is working on his grandfather's land and the Orr's are living elsewhere in Elkrun Township. 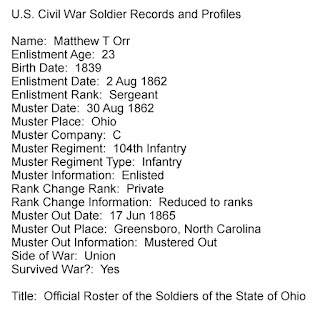 With the beginning of the Civil War, Matthew enlisted on August 2, 1862 and mustered in on August 30, 1862 as a Sergeant with Company C, 104th Regiment Ohio Volunteer Infantry.

In this book, History of the 104th Regiment, Matthew is listed as a Second Sergeant.  He was wounded twice; at a battle in Old Town Creek, North Carolina on February 20, 1864 and near Atlanta, Georgia on August 7, 1864.

Two accounts of Matthew having been killed in battle near Atlanta, Georgia.  The newspaper article was a reprint from a 1864 newspaper article.  I can only imagine the rejoicing in the family when Matthew showed up at the front door.
I did not purchase Matthew's civil war pension file, so I do not know why he was demoted to private.  He mustered out on June 17, 1865 in Greensboro, North Carolina and headed home to Elk Run Township. 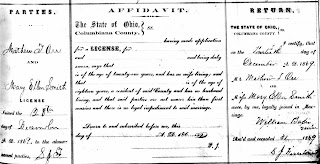 The newly weds have set up housekeeping in the town of New Lisbon (now called Lisbon).  Thee  is no indication where Matthew is a supervisor.  Mary Ellen's parents also live in New Lisbon where her father is an attorney.  Matthew's mother and half sister have also moved to New Lisbon. 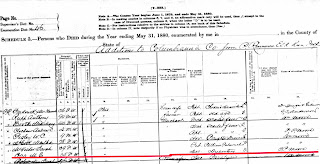 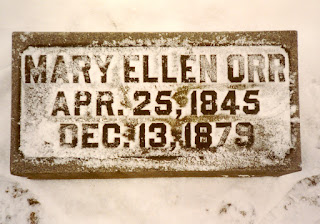 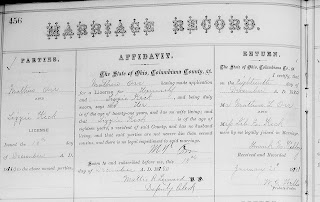 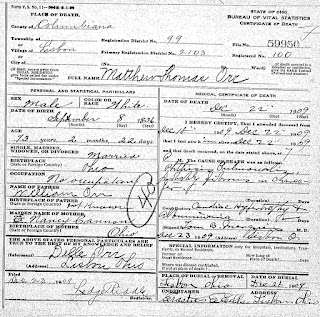 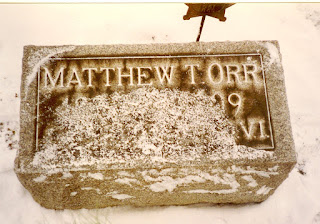 Matthew was buried beside his first wife, Mary Ellen Smith Orr, on December 23, 1909 in Lisbon Cemetery, Lisbon, Centre Township, Columbiana County, Ohio.
From the obituary, some information was given as to the location of Anna Orr, living in Pittsburgh, Pennsylvania and Hattie Orr, living in Chicago, Illinois in 1909.  Unfortunately, I have not been able to trace their movements or lives.
Additional Civil War Documents 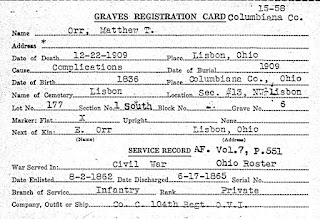 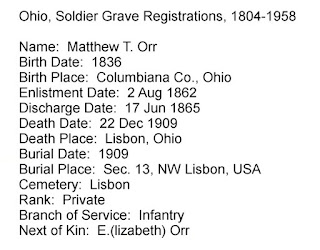 Libbie Elizabeth Keck Orr continued to live in Lisbon after her husband's death.  She stayed in their house on West Washington Street with her youngest daughter, Delle Orr.  Following Delle's marriage in 1920, Elizabeth Orr lived with her married daughter and her family at 317 East Chestnut Street, Lisbon, Ohio until she died.
Elizabeth Keck Orr died at age ninety eight, on December 2, 1948 at her daughter, Delle Orr Beck's home, where she had lived for over twenty years.  The obituary only mentions Elizabeth's natural born children.  At least one of her step children, Mary Emma Orr Hopwood was alive in 1948.  She was buried in Lisbon Cemetery, Lisbon, Ohio.
Children of Matthew Thomas Orr and Mary Ellen Smith Orr:
Children of Matthew Thomas Orr and Libbie Elizabeth Keck Orr: