My maternal great-grandaunt, Margaret "Maggie" C. Orr, daughter of William Morland Orr and Nancy Agnes Cannon Orr, was born in Elkrun Township, Columbiana County, Ohio in 1842.  She was only seven years old when her father died.  Her mother remarried; however, Maggie's stepfather only lived three years after the wedding.  Nancy Agnes Cannon Orr McCormick raised her children after 1853 alone. 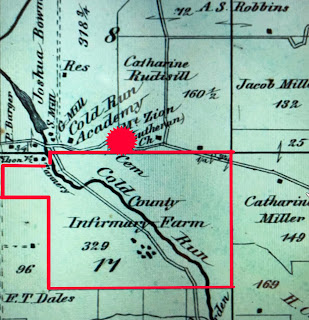 Columbiana County built a County Infirmary to house the poor and mentally ill. It was located west of New Lisbon (now Lisbon) in Centre Township. Two hundred acres of land was purchased in 1829. Those living at the home worked on the farm. during the remainder of the 1800's, additional land was purchased and more buildings were constructed.

The portion of the 1870 census report above contains the names of the first listed people working at the Columbiana County Infirmary.  Robert Stevenson was the supervisor and his wife, Moriah Stevenson, the matron.

How long Jim and Maggie worked together at the infirmary is unknown.  It does appear that this is where they met. 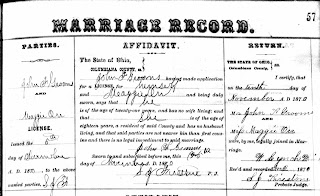 On November 10, 1870, twenty-eight year old, Maggie Orr married thirty-four year old James F. Groomes in Columbiana County, Ohio.  Reverend William Lynch, of the Methodist Episcopal Church, performed the wedding service.  James was the son of James Grooms and Nancy Frederick Grooms. James was born in April, 1836 in Ohio.  The surname is spelled with and without the letter "e".

In 1876, James F. Groomes was elected the new supervisor of the Columbiana County Infirmary. 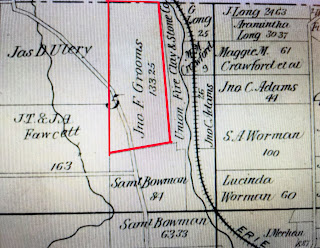 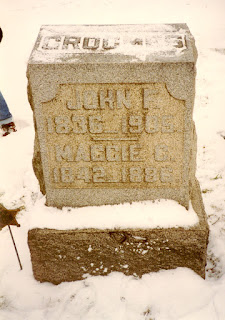 Achsah Groomes was enumerated on the 1900 and 1910 Ohio Federal census with the family of William J. and Lorena A. Yates, living at East Rail Road in Salem, Columbiana County, Ohio.  Achsah was employed there as a housekeeper. 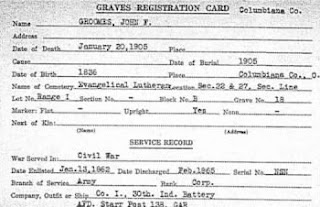 On January 20, 1905, John F. Groomes died at age sixty nine. He was buried beside his wife, Maggie, at Mt. Zion Lutheran Church Cemetery. He has a Civil War marker beside the gravestone.

Back in 1998, a new cousin, Jean Marie Barcus, contacted me regarding the Orr and Groomes families.  I must have posted an inquiry in a genealogy board out on the net and she was responding.  I gratefully accepted some Xeroxed old photos of her line.  Although Xeroxed photos are not in the ballpark of scanned ones, I have played around with them and then hit them with an old photo app. 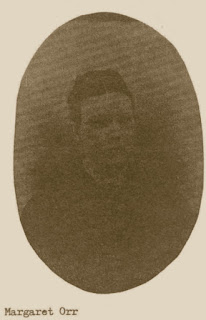 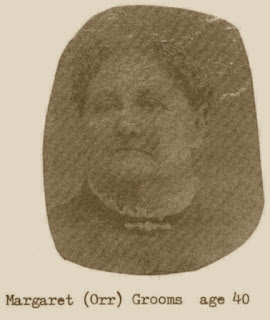