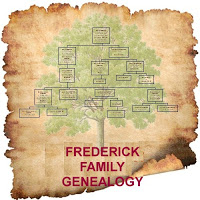 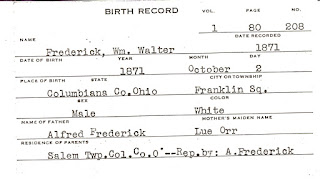 My maternal granduncle, William Walter Frederick, son of Alfred F. Frederick and Lucinda Bell Orr Frederick was born in Franklin Square, Columbiana County, Ohio on October 2, 1871.  He was the second child born to the Frederick's and joined his older brother, Albert L. Frederick.

I believe the boy was referred to as Walter.  He grew up in Franklin Square and later to Columbiana and Salem, all towns in Columbiana County, Ohio.  He was used to his father not being at home as Alfred Frederick worked for the railroad.  Walter had two brothers and two sisters, attended school, played with neighborhood friends, helped with chores, attended church and spent time with a large extended family living in the Columbiana County area.

This is the only photo I have of Walter.  He would be about fifteen, although he looks younger to me.

There are very few records and documents for Walter.  Another case where the 1890 census would be helpful.

The railroad fireman fed and stoked the fire in the steam engine train.  Early engines burned from 40 to 200 pounds of coal per mile.  The fireman was also responsible for keeping the wheels lubricated.

Walter followed his father into work with the railroad.  From an article featuring Alfred Frederick in a Pittsburgh newspaper, I learned my maternal great grandfather worked for forty years with the P&LE Railroad.  I am not certain which company Walter was with since the tracks all met in larger towns and a person could switch trains. 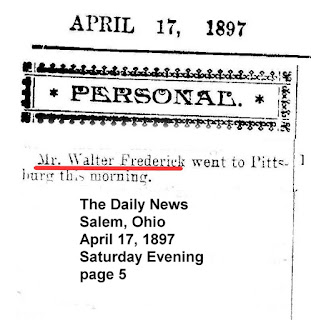 Walter would have been twenty six in 1897. I have used this article to determine when the Frederick family relocated to the Pittsburgh area from Salem, Ohio.  Certainly he would have been employed with the railroad by this time and was probably visiting old friends and family in Salem. 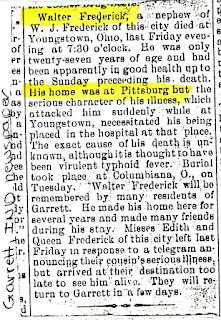 Probably over a decade ago, another researcher sent me this obituary.  My mother and I had already visited the Columbiana Cemetery and located the Frederick's buried there.  I knew Walter had died at a young age.  The obituary gives a glimpse into Walter's personality--a young man that made friends easily, personable.

The tracks that Walter traveled the final days of his life belonged to the B&O Railroad.  Garrett, Indiana was a stop on their track.  I am not certain the the P&LE Railroad also used those tracks; however, the P&LE did run from Pittsburgh to Youngstown where Walter would have made a connection to go home. 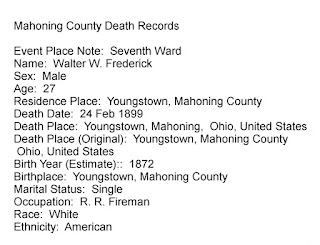 It was from Walter's Mahoning County, Ohio death information that I learned he followed his father into railroading as a railroad fireman.  The medical diagnosis of his death was typhoid fever. 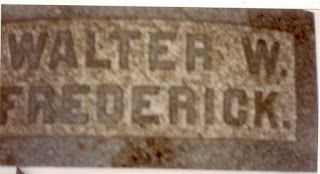 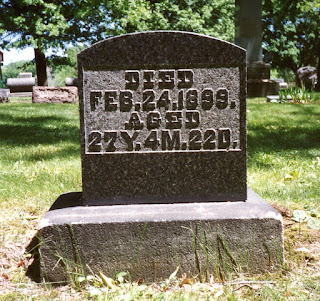