Robert Ross VanGilder is my paternal great granduncle. Son of John Oliphant VanGilder and Mary Louise Hill, he was born on March 19, 1865 in Monongalia County, West Virginia--probably in Morgantown and died at the age of twenty five on September 26, 1890 in Monongalia County, West Virginia.
He is buried at Mt. Union Cemetery, Union District, Monongalia County, West Virginia. To date, I have not found much biographical information on Robert other than his employment--a house painter with his older brother, George Ethelbert VanGilder.
One of my goals last week while in Morgantown was to drive out to Mt. Union Cemetery to get a better photograph of Robert's tombstone. The last time I photographed several of the family grave markers at Mt. Union Cemetery was over a decade ago when I was a newbie. For some reason I only photographed the stone and not the inscription. A beginners mistake 😉
Robert's marker is beside the drive about half way back in the middle section, the right hand driveway. Surrounding him are his mother and father, various siblings and his great grandparents--the Purnell and Mary Mary Tumlinson or Tomlinson Houston and Robert and Rebecca Caldwell Hill and his Aunt Sophia Hill.
For years I have been unable to locate the burial place of the VanGilder's oldest daughter, Anna Bell VanGilder. Born on November 11, 1854 and died at age twenty eight on August 04, 1883, she was the first of John and Mary's children to die. Feeling the back surface of Robert's tombstone, I think eroded by decades of weather, is the inscription for Anna Bell.
As with many of my older blogs, new information has come to light.  Slowly I am updating and adding hyperlinks. 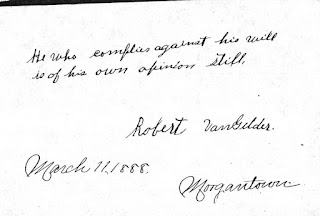 This is a scan of Robert's verse that he wrote on March 11, 1888 in his older brother's, George Ethelbert VanGilder's, Autograph Album.  His Mother, sisters and Aunt Sophia Hill are other VanGilder family members who signed the album.
He who complies against his will
is of his own opinion still.
Robert VanGilder
Morgantown
March 11, 1888
Robert Ross VanGilder on Find A Grave
Updated September 2022