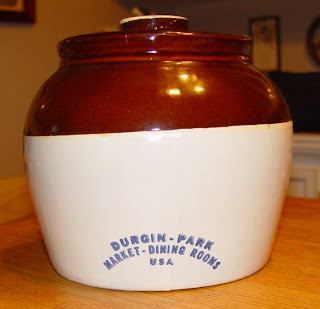 The Durgin Park Bean Pot was a prized possession of my mother, Martha Jean Stark Hughes. I think it was purchased when my husband and I lived in the Boston, Massachusetts area during the early 1970's.

She spied it while we were having the traditional slab of roast beef lunch at Durgin Park and it became her souvenir of that particular trip from Pittsburgh to Boston. The story goes that she carried it in her lap on a plane from Logan to Pittsburgh International Airport and it was displayed with great pride in our family home on Bramble Lane. She did use it to bake beans in and I borrowed it once for a special picnic outing.

Following my parents divorce, it was moved, by car, to Lakewood, Ohio where it resided until my mother's death in 1999.

Today is has a place of honor in my home. I will admit that I did drop the lid and broke it. Fortunately it super glued together beautifully and no lightning blots from above struck me ;-)