Research an event your ancestor may have attended. Did your ancestor live within a few blocks of the parade route for the annual Fourth of July parade in the town where they lived? If your family lived in a rural area, perhaps they attended a county or state fair. If they lived in a big city, perhaps they attended a play or movie opening. Was there an amusement park or traveling carnival near the area your family was from, one they might have visited? Were there fireworks displays in the town your family was from? How much do you know about the types of entertainment your ancestors might have enjoyed? This "fun" edition of the Carnival of Genealogy will be hosted by Jasia on the Creative Gene. 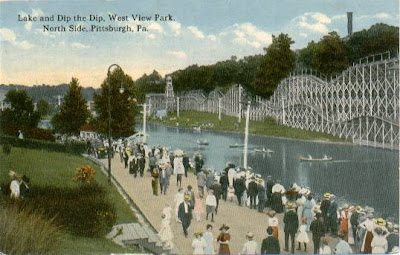 My family had the good fortune to live fairly close to one of Pittsburgh, Pennsylvania amusement parks—West View Park. During the 1950’s, when I was an elementary school student, our annual school picnic was held at West View Park located in West View, Pennsylvania. How we looked forward to that special day spent at the park—riding the various rides, spending money in the penny arcade, eating hot dogs and cotton candy and wandering aimlessly around the midway with school friends. West View Park is no longer there. The grounds have been turned into a shopping center. Long gone is the park however, my memories of the Dips (that famous wooden roller coaster), the Racing Whippet, Kiddieland and the beautiful carousel are etched in my mind. 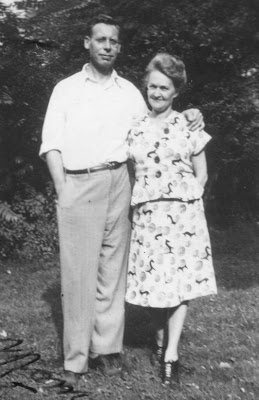 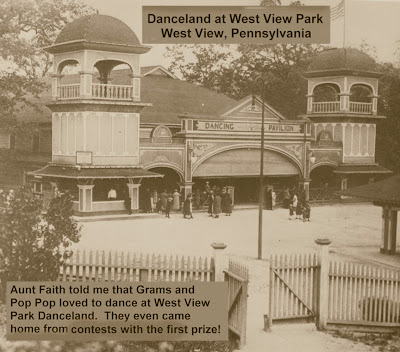 My grandparents were dancers. According to my Aunt Faith, her folks (my Grams and Pop Pop) would go to Danceland, almost weekly. Often there were dance contests and Grams and Pop Pop would win a prize and occasionally it was first prize!

Dance must have been genetic as both my father and his sister, Faith loved to dance. Faith was given a full tuition scholarship to what was then called Carnegie Tech after her dance audition. She continued to teach dancing well into her 70’s. My brothers and I enjoy dancing although I’m certainly not in the prize category ;- )