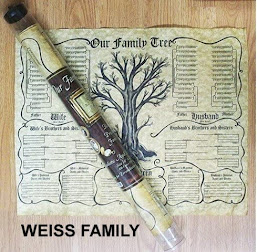 Adolph Herman W. Weiss, son of Frederick Heindrich Adolph Weiss and Ferdinande Lehman Weiss, was born circa 1853 in Hamburg, Germany.  He is my paternal great great granduncle.  I have also seen his name written Adolphe Hermann W. Weiss and Adolphus.  To date I do not know what the "W" in his name stands for.

I have had a difficult time researching Adolph and his family, not finding any information past a directory in 1883.  Did they leave the UK?  There is an Adolph Weiss who immigrated to the United States and lived in Massachusetts during the time frame; however, the information does not match my granduncle.

The 1861 census is the first document I have found in the UK for the Weiss family.

Curious as to whether Adolph, age 8 1/2 was actually working on the docks.  Children, at that time, were not to work under age ten; however the laws seem to be for textile, mining, various factory workers.  I suppose Adolph could have been doing errands and helping with easier jobs on the docks at age eight.  Or, for some reason the enumerator just dittoed the employment of his father down the family list.  Certainly, young Ferdinande, Adolph's sister was not working at age 1 1/2.

The Weiss Family lived a street away from the main business street (Church Street) in West Hartlepool in 1861.  This area was also within walking distance to the Hartlepool docks.

On November 27, 1870, Adolph's father, Frederick Heindrich Adolph Weiss, died at their home on Victoria Terrace.  Frederick Weis was only forty-two years old when he died from bronchopneumonia.  Adolph became "the man of the family" at age eighteen.

Primary Borough The Hartlepools, Town of West Hartlepool, Township of Stranton, Ecclesiastical District of Christ Church.
Victoria Terrace
The Weiss enumeration was at the bottom of one page and the top of the next.  I did a cut and paste of page one.
Ferdinande Weiss, head of family, widow, female age 49  not employed, born in Hanover (Germany).  Living in a house.  Reading between the lines, Ferdinande was indeed employed.  She was running a boarding house.  Perhaps her daughter was assisting her mother with some of the daily chores as well as employment as a dressmaker.
Adolph Weiss, son, unmarried, male age 18, employed as an apprentice to an outfitter, born in Hamburg (Germany).
The people enumerated on the next page of the 1871 census are three boarders and Adolph's sister, Ferdinande Weiss.  Of interest to me, one of the boarders, Christian Olesen married Adolph's sister, Ferdinande Weiss and they are my paternal great great grandparents.
The Weiss family continued to live on Victoria Terrace following Frederick's death.  Victoria Terrace is an extension of Church Street.  One side of the street would have had a view of water. Today, there are not many houses on Victoria Terrace and the water side is mostly open.
Adolph was apprenticed out to an outfitter by 1871.  I google searched that particular apprenticeship and found nothing; however, what I did find was that an outfitter made clothes for hunting.  I was thinking that he was apprenticed to learn to make clothes for the general public. 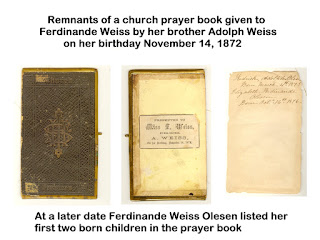 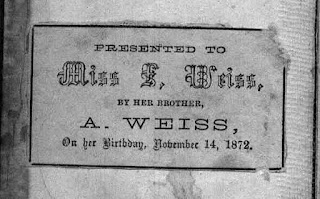 A very precious piece of my family history that has been saved for almost 149 years.  Little did Ferdinande and Adolph know the remnants of this birthday gift would have been saved and in the hands of a descendant in 2021.  The birth date given for Ferdinande Weiss on the 1861 UK census is incorrect  according to other records, as well as that she was a son.  Her birth was November  14, 1855.  This gift was given by her brother to commemorate her seventeenth birthday. 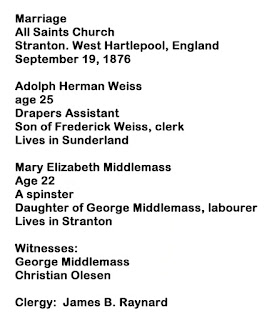 On May 22, 1888, Adolph's mother, Ferdinande Lehman Weiss, died at age sixty-two at her home in West Hartlepool.

Adolph and Mary Elizabeth's son, William Ernest Weiss died in 1882.  Was William their only child.  The baptism records on the Durham website only show one Weiss baptized and the date is too early for Adolph and Mary Elizabeth.  There are two possibilities with question marks on the list.  I have not thrown a credit card on this website, so I cannot say whether these two babies were born to this family.  Unfortunately, both died as as infants. 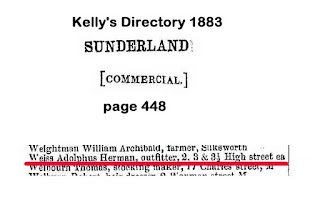 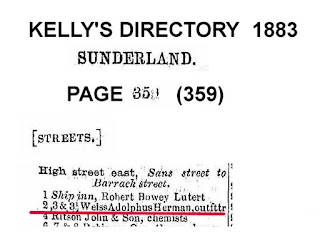 The 1883 Kelly's Directory is the last piece of information I have on Adolph and Mary Elizabeth Middlemass Weiss.  They live at 2, 3 and 3 1/2 High Street East in Sunderland.  Adolph is employed as an outfitter.  It is very likely that the Weiss' lived at one of the addresses and his shop was one of the others.  Perhaps the 3 1/2 is an apartment above a shop at 3 High Street.
Other Weiss blogs on Flipside:
The Weiss Family of West Hartlepool, England written in 2015