Tracking the Addresses of Charles Stark in Pittsburgh and Allegheny City, Pennsylvania 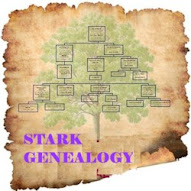 My maternal great grandfather, Charles Stark lived in Lawrenceville, a neighborhood of Pittsburgh, downtown Pittsburgh and Allegheny City between the date of his arrival in the United States on September 15, 1860 and his death on April 26 1895.  All of the Pittsburgh City Directories for his time period are available on Ancestry, although I looked these up years ago on microfilm.  Charles is missing from some of the directories, although there are other documents that show he was still living in the area. I was also able to locate a 1879 street map of Pittsburgh and Allegheny City to track his and the Stark family's movement.

Six months after his arrival, Charles enlisted in the 2nd Regiment of the Virginia Infantry.  It was not unusual for the military to enlist newly immigrated males during the Civil War.  Charles served from May 15, 1861 and mustered out on May 22, 1866.  When West Virginia became a state, he fought with a now northern Infantry and Calvary unit.  When the war ended, he saw action in the New Company H, 6th West Virginia Calvary out in the Dakotas and Colorado.

The 1879 map above has the various areas marked in the red where Charles and his growing family lived in Pittsburgh, the Lawrenceville neighborhood and in Allegheny City following his service.

Charles is not listed in any Pittsburgh City Directories from the time he mustered out of service in the Civil War.  He may have been living with relatives and not listed individually.  I was told that Wilhelmine Catherine Schwarz, who married Charles Stark, had relations in Lawrenceville.  Did they meet in Lawrenceville? Or were memories incorrect, and it was actually Charles who had relatives there?

Charles Stark lived on Fifth Avenue in Ward 3 for a number of years.  This area is near the "point" of Pittsburgh where the Allegheny and Monongahela Rivers join to form the Ohio River.

I should mention that I have been told that Charles was a shoe salesman.  I work in a retail clothing store that also sells shoes and I have a chuckle when I am selling shoes.  It must be a genetic thing ;-)  Charles is not listed in the 1872 directory; however, he became a naturalized citizen in Pittsburgh in 1872.
He is also not listed in the 1877, 1878, 1879 and 1800 directories.  Charles married Wilhelmine Catherine Schwarz on February 6, 1878 in St. Louis, Missouri.  Charles is listed as Carl, the same as on the immigration document.  Of interest, the minister is Ch F. Stark.  I have blogged about this Stark and his family, trying to find a Stark family link.  I was unsuccessful.  Questions remain, why get married in St. Louis?  Supposedly it was an arranged marriage with Wilhelmine traveling from Europe.  Was she already in St. Louis or did Charles and she travel from Pittsburgh?
Charles and Wilhelmine were living in Allegheny City across the Allegheny River from Pittsburgh in 1880.  Although there is no city directory listing, there is a June 14, 1880 census report that lists 58 Taylor Avenue, Allegheny City, as their residence.  Also my maternal grand father, Charles Edward Stark was born on September 23, 1880 on Taylor, Ward 2, according to a birth record.
I do want to note here that a 1 year old son, Charles Stark is listed in the 1880 census.  I have heard that the Stark's did have a son who died as a child, born before my grandfather.  I had always been told the child's name was Theodore.  To date there has been no information found for him. In 1880 he was listed as Charles. 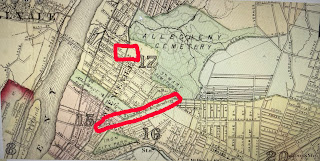 The Forty-sixth block and Butler Avenue, located in Lawrenceville is the small red square on the map above, near Allegheny Cemetery.  Birth records for the next two Stark births list the Butler and 46th Street, Ward 17 address--Amelia (Emily) Stark, 1882 and Alfred Walter Stark, 1884.

The Stark family moved across the Allegheny River to Allegheny City between 1885-1886.  Two daughters were born while the family was living at 357 East Street according to birth records--Lucy Wilma Stark, born 1886 and Dora Maria Stark, born 1888.
Between 1889-1890, the family moved a street away to 250 Howard Street.  It was from the Howard Street address that Charles was sent to the City Home perhaps in June 1889.  He died in the City Home on April 26, 1895.

Wilhelmine was not able to stay at the 250 Howard address after Charles was sent to the City Home.  She moved her family back to East Street.  Perhaps in 1894 and definitely on May 2, 1895, she and her children were living in Avalon, Pennsylvania, which is located in Allegheny County.  Wilhelmine was making a living by sewing and her monthly rent was $12.00.  This information is part of the pension file.
Other Flipside blogs on Charles Stark:
Charles Stark Tombstone Tuesday

Charles Stark:  Is this your great grandfather?