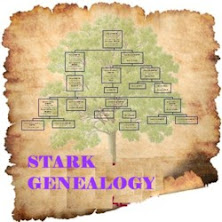 Wilhelmine became a widow at age forty-four; however she lost her source of income at age thirty-eight or thirty-nine when her husband, Charles Stark, was sent to the Allegheny City Home for displaying signs of lunacy.  She was responsible for five children ages 15, 13,11,9 and 7.

Wilhelmine stayed in Allegheny City, moving from the Stark home at 250 Howard Street to a nearby home at 197 East Street, probably soon after her husband was taken to the Allegheny City Home. 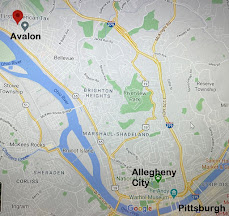 According to Civil War pension file documents by May, 1895, Wilhelmine and her children were living in Avalon, Pennsylvania, a borough of Pittsburgh located six miles down the Ohio River.  Whether she made the move before or after the death of her husband is unknown.  Again the Civil War pension file gives some information on the family.  On July 29, 1895, long time family friend, Jacob Colmer, lists in an affidavit for the civil war pension file that Wilhelmine pays $12.00 a month rent and has only her skill as a seamstress to pay the bills.
My mother, a grand daughter of Wilhelmine and daughter of Charles Edward Stark, told me that her father attended school through eighth grade and left to help support the family.  As mentioned above, Charles was fifteen when he father died. My maternal grandfather had an affinity for math.  Whether he used this skill when he was first employed is unknown.

1899 Polk Pittsburgh City Directory
page 1203
Charles is listed in the 1899 Pittsburgh City Directory as a clerk with the Western Pennsylvania Rail Road and living in Avalon.  My grandfather was living with his mother and siblings.
On another page of the same city directory I found Alfred Walter, my grandfather and their mother Wilhelmine all listed.  Both Walter and my grandfather are listed as employed as clerks and the family is listed as living on Marie north of Charles in Avalon.  I have not been able to locate a Charles Street on the Avalon map.  This is the home of Wilhelmine and my grandfather.  Walter is a boarder.
The Stark family was living on Center Avenue in Avalon.  The census does not give the house number.  All the children, except my grandfather, are attending school.  Wilhelmine lists 1877 as the year she immigrated.  The number of children census question gives me some pause.  It looks like it was listed that she had 5 children and 6 was written on top.  I sure wish I could locate the birth certificate for Wilhelmine's first born, Theodore Stark..  The census also lists that Wilhelmine owns the house free of mortgage.  Was my grandfather, who was supporting the family, earning enough to purchase a house outright?  Did Wilhelmine's European family send money to assist in supporting the Stark family which helped to purchase a house?

Wilhelmine lived in two known houses located on Marie Street in Avalon.  The 1900 census lists Center Avenue, but no house number.  Later census reports do list a house number and those two are starred on the map.
The Stark women all looked to be very fashion forward in the photographs I have seen.  Oddly, there are none that feature the weddings.
On June 19, 1907, twenty-four year old Amelia Stark, who was called Emily, married Howard Herron Miller in Avalon, Pennsylvania.
The following year, twenty-one year old Lucy Wilma Stark married Mont Mettie Munger in October, 1908.
On July 9, 1909, the Millers welcomed their first child and Wilhelmine's first grandchild, Edward Herron Miller, who was born in Avalon.
Wilhelmine, age fifty-six, and three of her adult children are living at 530 Marie Street in Avalon.  My grandfather, Charles E. Stark employed as a clerk with an steel company, Alfred W. Stark employed as a photographer in a studio and Dorothy Stark, not employed.  This is a confusing census.  Wilhelmine lists her birth as Indiana as well as her husband, Charles Stark's birthplace as Indiana.  She lists as having five children, with four alive.  All five of her children are alive.
There is some discrepancy as to the location of 530 Marie Street.  Google maps comes up with two houses closely side by side; however, looking at the numbering 530 would be the empty lot.  Another option, I google searched the address another nearby house came up.  It was for sale a couple of years ago and then removed from the listing.  It was in desperate shape--in my humble opinion, beyond a fixer upper.
The census lists that the Starks owned this house with a mortgage.  The house was built in 1892, so it was only eighteen years old when the Starks purchased it.  A single family house with three bedrooms and one bathroom.  The Zillow website has photos and if you look beyond the condition of the rooms when the photos were taken (I have no idea how old they are), there are some charming features; the old style railings and window trim, arched doorway, built in shelving, a fireplace.
Wilhelmine becomes a grandmother again.  On April 21, 1910, Lucy and Mont Munger welcomed a daughter, Wilma Angie May Munger, who was born in Pittsburgh, Pennsylvania.
When my maternal grandfather, Charles Edward Stark, married in 1914, he listed 731 Florence Avenue as his address.  Wilhelmine was undoubtedly also living with her son in this house, too.  Perhaps the Starks moved to Florence before Dorothy and Walter married.  Following their honeymoon, my grandparents returned to this address.
The next four years saw a series of marriages in the Stark family.  In May, 1912, Dorothy Marie Stark married Thomas Craig Cooper.  In 1913, Alfred Walter Stark married Frances, maiden name unknown.  Lastly, my maternal grandparents married.  Charles Edward Stark united in marriage to Martha Marie Frederick on June 10, 1914 in Pittsburgh, Pennsylvania. 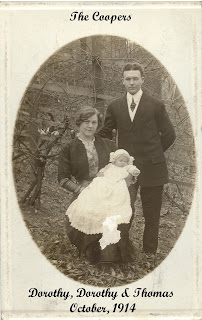 Two daughters were born to Thomas and Dorothy Cooper.  On September 5, 1914, Dorothy Wilma Cooper and on March 4, 1919, Lois Margaret Cooper.  Both girls were born in Bellevue, Pennsylvania.
This census finds sixty-six year old Wilhelmine living as a boarder with her married daughter, Lucy Munger and son-in-law, Mont Munger at 507 Marie Street in Avalon.  Mont is employed as a clerk in an office.
The Mungers were renting this single family home, built in 1902.  There are three bedrooms and one bath, six rooms total.  There are interior photos on realtor.com website.
Lucy Munger was pregnant when the census was taken.  Her son, Mont Mettie Munger, Jr. was born on April 6, 1920 in Avalon.
Several months later, Lorraine Wilma Miller was born to Emily and Howard Miller on July 1, 1920 in Avalon.
Wilhelmine's last grandchild, my mother, was born on December 4, 1921 in Allegheny City, Pennsylvania. Charles Edward Stark and Martha Marie Frederick Stark welcomed their daughter, Martha Jean Stark and were at home on California Avenue, Avalon. 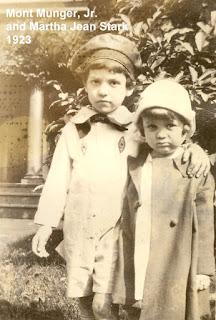 Very few photos of Mont Munger, Jr, who was called Junior. Here he is with my "pouty" Mom. Love this picture. Taken in 1923.
Two untimely deaths occurred a year apart during the 1920 decade.  Thomas Craig Cooper, husband of Dorothy Stark Cooper died on August 27, 1926 a few months shy of his fortieth birthday.    Wilhelmine's daughter, Lucy Stark Munger died on January 27, 1927 at the age of forty.
It is unknown where Wilhelmine lived during this decade after the 1920 census was taken.  Perhaps she stayed in her daughter Lucy's home to help her.  Lucy died of heart failure and was probably in a weakened condition.
During August, 1928, Wilhelmine, along with Charles, Martha Jean, Martha, Walter and Frances took an extensive trip to Washington, D.C., Mt, Vernon and then up into New York State.  Back in 2009 I blogged about this vacation, Stark Family Vacation, August 1928.
In 1930, seventy-seven year old Wilhelmine was boarding at the home of James A. Dodds.  The Dodds were not family and it is the first time Wilhelmine lived outside of Avalon following the death of her husband in 1895.  Bellevue is a borough of Pittsburgh and is directly south east of Avalon along the Ohio River.
This is the house where Wilhelmine was enumerated as a boarder in 1930.  James Dodd gave the value as $1200.00.  He is renting the property.  With renovations, the house sold recently for $189,000.  It has three bedrooms and one bath and was built in 1896.  There is some wonderful old world charm in the house, some original wood flooring, a beautiful staircase with decorative woodwork and arched doorways.
I believe that most of the 1930's decade, Wilhelmine lived with her widowed daughter, Dorothy Stark Cooper.  My mother can remember visiting their home, which was an upstairs apartment.  There was a player piano and Uncle Mont Munger would sit and pretend to actually play the piano, running his fingers up and down the keyboard. 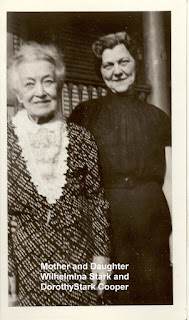 After checking Pittsburgh City Directories and the 1940 census report, I am pretty certain that Wilhelmine did live with her youngest daughter, Dorothy Stark Cooper during the 1930's and until Wilhelmine's death.  It now makes sense why Dorothy Wilma Cooper Richards, Dorothy's daughter and Wilhelmine's granddaughter, had such vivid memories of her grandmother. Granddaughter Dorothy was in her late teens and into her mid twenties when Wilhelmine lived with them.
Wilhelmine's daughter, Emily Stark Miller became a widow on December 9, 1932 when her husband, Howard Herron Miller died at their home, 534 Marie Avenue, Avalon, Pennsylvania. 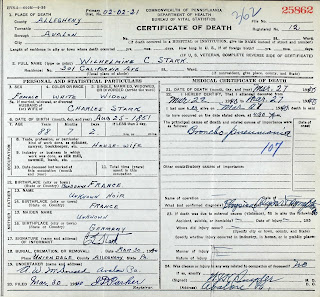 Wilhelmine Catherine Schwarz Stark died at age eighty-eight on March 27, 1940.  The death occurred in her daughter, Dorothy Stark Cooper's home, 301 California Avenue, Avalon, Pennsylvania, where she lived. Pneumonia was the primary cause of her passing.  My grandfather, Charles Edward Stark, supplied the certificate information for his mother.  Notice he was confused as to her maiden name and birth place. 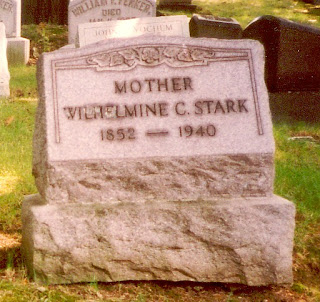 Wilhelmine was buried at Uniondale Cemetery, Allegheny County, Pennsylvania on March 30, 1940.  My mother told me that, although her father and her Uncle Walter were never that close, the burial of their mother in Uniondale led to them never talking again.  My grandfather felt she should be buried in Uniondale and Walter thought the cemetery was not worthy.  Wilhelmine's husband was buried in Uniondale as was her daughter, Lucy Stark Munger.  Several decades later, her daughter Dorothy Stark Cooper, would be buried beside her mother in Uniondale.
An additional blog about Wilhelmine:
Stark Happy Dance