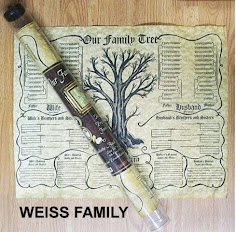 In 2015, I blogged about my paternal great great great grandparents, Frederick Heindrich Adolph Weiss and Ferdinande Lehman Weiss.  The blog was entitled Weiss Family of West Hartlepool, England.  In the past five years, more information has come to light.  Adding European search to my Ancestry account and a subscription to British newspapers has given me a new research outlet.  I apologize if some of the information in this blog is also located in the one written in 2015.  I am trying to toggle between the two to keep the information in 2021 new.
Town of West Hartlepool, Parish of Stranton,  Ecclesiastical District of Christ Church.
John Street, perhaps Number 3 John Street.
Frederick H. A. Weiss, head of household, married, male age 35,  dock laborer, born in Mecklenburg, Germany.  Living in a house.
Ferdinand Weiss, wife, married, female age 31, dock laborer--wife, born in Hanover, Germany.
Adolph H. W. Weiss, son, male age 8 1/2, dock laborer--son, born in Hamburg, Germany.
Ferdinand Weiss, daughter crossed out and replaced by son, age 1 1/2, dock laborer--son, born in Hamburg, Germany.  This is a daughter and my paternal great great grandmother.
John Street in Hartlepool today is an alleyway where folks park their cars.  The side of the street with buildings appear to be the back end of the building not the entrance.  Perhaps the Weiss house was located on the side of the street where there is a fence.  The front side of the buildings are actually businesses and apartments located on Church Street many of which look to be in a state of rehabilitation.   After looking at the map at the end of the blog, back in 1861, John Street was a residential street between Lynn Street and George Street.  It appears that the street now called John was an alley between the the back of the buildings above and the fence.  John would have been the street behind the fencing.
Between 1861 and Frederick's death on November 27, 1870 the Weiss family moved to a house on Victoria Terrace.  Reposting Frederick's death certificate.  Frederick died at age forty-two from broncho-pneumonia at his home.  His employment is listed as a brokers clerk.  The website, Hartlepool Then and Now, has an article regarding ship broking and that there was an agency in Hartlepool.  Another website lists the job description of a ship broker, "The main purpose of a ship broker is to act as specialist intermediaries/negotiators between ship owners and charters to arrange ocean transport of goods and commodities by sea, the employment of a vessel to buy/sell ships on behalf of his client."

Relocated after it was hidden in the Weiss file.  In 2006 a very helpful Hartlepool researcher sent me this information.  Since I forgot about it, I do not know if I ever looked up the actual obituary when I had membership to the British newspaper website. 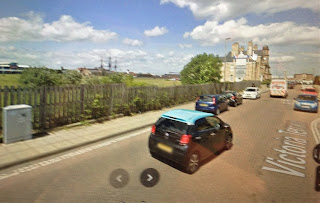 I opened google map and searched Victoria Terrace.  It connects to Church Street, which is the main/business street in that portion of town.  Most of the housing units on Victoria Terrace have been destroyed.  There are a few; however, they look newer than 1871.  When my brothers and I visited Hartlepool in 2003, we wandered around this area.
Of note, my single paternal great great grandparents, Christian Invart Olesen and Ferdinande Weiss, were living in the same household.  They married on August 30, 1874, probably in Christ Church.  My paternal great great grandmother, Ferdinande (also known as Ferdinanda, Ann and Annie) did not make a very wise choice in husbands as I found numerous articles in Hartlepool newspapers of Christian Olesen going bankrupt, stealing and making threats. 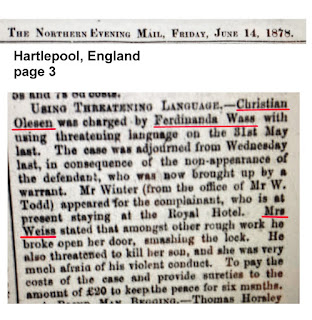 One such threat was against his mother-in-law, Ferdinande Lehman Weiss.  Christian Olesen was brought up on charges for threatening language against Ferdinande, broke open the door to her house and threatened to kill her son, Adolph Weiss.  Christian did not appear at court.  He was at the Royal Hotel.  Perhaps his wife, Ferdinande's daughter had thrown him out.
Primary Borough of Hartlepool, Town of West Hartlepool, Parish of Stranton, Ecclesiastical Parish of Saint James.
10 Lower Reed Street
F. Weiss, head of house, widow, female age 54, occupation running a lodging house, born in Germany.  Living in a house.
Harold Casper, lodger, unmarried, male age 24,  occupation shipping clerk, born in Denmark.
A. Samuelson, lodger, unmarried, male age 27, occupation shipping clerk, born in Norway.
W. Kurtzlisel ?, lodger, unmarried, male age 30, occupation shipping clerk, born in Germany.
Mary Costide ?, servant, unmarried, female age 18,  occupation general servant, born in West Hartlepool.
Google map searching, there are no houses remaining on Reed Street.  The houses standing today on Lynn Street were probably built after 1881.  No houses are left on Reed Street.  At the far end are a few factory buildings.
On May 22, 1888, Ferdinande Lehman Weiss, age sixty-two, died at her home, 20 Scarborough Street, West Hartlepool.  Cause of death was dropsy, today called edema, puffiness caused by excess fluid trapped in tissue.  Secondary cause was cardiac disease.  I do not know where Frederick and Ferdinande Weiss are buried in the Hartlepool area. 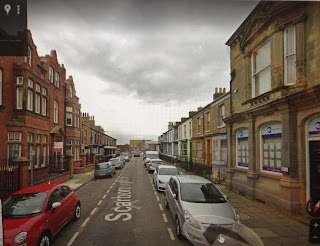 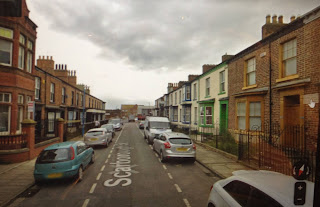 Wahoo, I found the house, located on a lovely street with a metal street sign above the street.  Indulge me as I walk you down Scarborough Street.  The metal sign is at the corner of Church and Scarborough Streets. 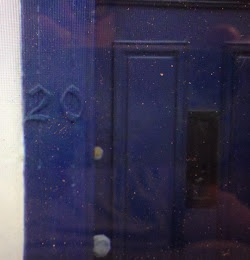 20 Scarborough painted, rehabbed and ready to sell.  In the 1898 "To Let" notice above, we know it is an eight roomed house. 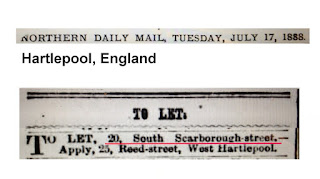