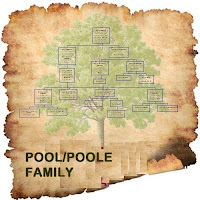 Sidelined from work for a couple of weeks by Covid-19, I can turn my thoughts back to family history.  I had to do a search through my blog to see if I have ever written about my paternal great great grandmother, Sarah Louise Harner Pool (later changed by some to Poole). 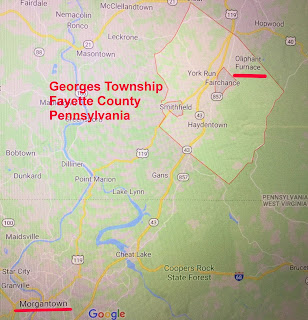 The only census I could locate for the Harner family in Fayette County, Pennsylvania was 1840.  It is listed as Phillip Herner living in Georges Township.  Two siblings born after Sarah list Oliphant Furnace, Georges Township, Fayette Couny, Pennsylvania.  By 1850, The Harners had removed to the Eastern District of Monongalia County, (West) Virginia ie Morgantown.  As shown on the map above, it was not a great distance for the move.

It is unknown what prompted the move to the Morgantown area, although Philip was born there and his father, also named Philip, owned land there.  In fact, old Philip Harner is enumerated as a land owner in Monongalia County, (West) Virginia as early as 1802.  The Census records show that Philip's father died before 1840; however, his mother, Dorothy Harner was still living in the Eastern District until her death between 1860-1870.

Morgantown was a growing area in 1850.  Public schools, two academies, steamboat transportation, roads, numerous churches, cultural programs, a newspaper and a town area built around High Street were in place.  During that decade the B&O train laid tracks through the area.  A stagecoach service was established.  As the town grew more doctors were available.  By the end of the decade, two stagecoaches were active in Morgantown to deliver passengers and mail.  This was Sarah Louise's world from age seven until her sweet sixteen.

Philip W and Sarah added two more children before leaving Pennsylvania; Mary Elizabeth Harner and Philip Fairchild Harner.  Once settled in Monongalia County, William Taylor Harner and Henry James Harner were born.  A stillborn daughter was delivered on March 5, 1858.  Sarah Louise had eight siblings to grow with and learn from.  As an older daughter, she probably helped her mother with cooking and cleaning and tending to her younger brothers and sisters. 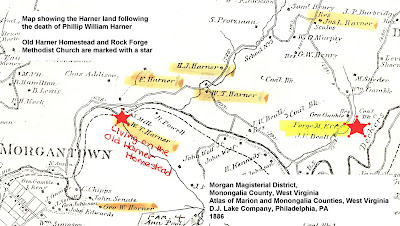 Philip William Harner was a blacksmith by trade.  As he acquired more land he also farmed.  The map above, 1885-1886, shows the land outside of Morgantown owned by the sons of Philip Harner. His son, William Taylor Harner owned the Old Harner Homestead.  I imagine those parcels of land were given by Philip to his sons. One day while googling around the net, I happened upon a the National Register of Historic Places listing.  Of course I checked Monongalia County, West Virginia.  Lo and behold there was a listing for the Old Harner Homestead.  Probably a smaller house when Philip William Harner purchased the property in 1852.  How much of the present house was constructed by the Harners is unknown--I like to think all of it.  On a visit to Morgantown after finding this information, my brother and I drove to the house and it was FOR SALE.  Needless to say, we were inside that house the next day.  I have a Wiki piece on the net:  Old Harner Homestead.

Back to Sarah Louise Harner and Sampson Frum Pool

How and when Sarah Louise met Sampson Frum Pool is lost in history.  Suffice to say, the Pool family was large, prominent and spread out over the Morgantown area.  They could have met at any number of venues and events.  I have noticed that I have not blogged about Sampson or any of my Pool/Poole ancestors.  I need to correct that deficiency. 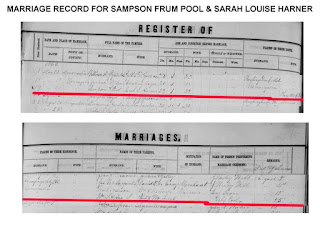 No stories have been passed down concerning Sarah Louise's life.  I imagine she was a typical farmers wife, tending to farm chores, raising eight children, baking, cooking, house cleaning and doing laundry from sun up to sun down.  Probably a regular church attender.  I do know stories regarding two of her daughters and they probably learned the behavior from their mother.  Sarah Ann kept a very clean house and would put newspaper down when people sat at the table to eat.  My paternal great grandmother lost her husband early and ran boarding houses to make financial ends meet.  She was quite a baker and later in life was a cook for a riverboat.

As in the life of all, there are joys and sorrows.  Sarah Louise's journey was no different.


Sarah Louise lived to enjoy numerous grand children, especially those that lived in and near Morgantown.

On Tuesday, December 14, 1909, Sarah's husband of forty three years died.  The obituary mentions that Sampson had been in poor health for some time and had been moved to his daughter, Jessica Pool VanGilder's home in Sabraton, where he died from diabetes.

To date I have not been able to locate the 1910 census report for Sarah Louise.  Following Sampson's death, she may have continued to live on the family farm.  Her son, Philip Albert and daughter, Jessica VanGilder were living nearby. Or, perhaps the farm was sold and she moved between her two children's homes. 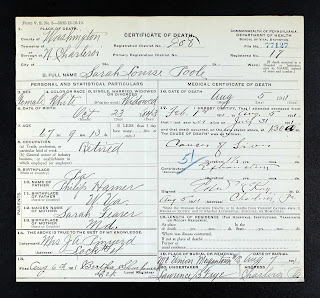 In February 1911, she moved to live with her daughter, Sarah Ann Pinyerd in North Charleroi, Washington County, Pennsylvania.  Sarah Louise Harner Pool died there on Saturday, August 5, 1911 at the age of sixty eight from liver cancer.  Her body was brought back to Morgantown and laid out at her son, Philip Albert Pool's house.  The funeral service took place there under the leadership of Dr. Charles Kelley Jenness of the Jerome Park Methodist Episcopal Church. 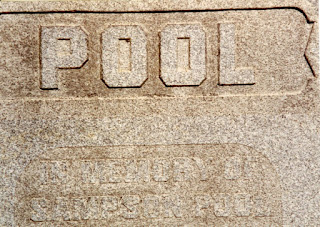 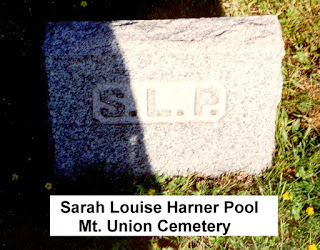 She was buried on August 7, 1911 beside her husband in Mount Union Cemetery, Monongalia County, West Virginia.

Of note, all of the children of Sampson and Sarah Pool are buried in Mount Union Cemetery.  Annabell Davis, Sarah Pinyerd (no marker), Nettie Pool, Estelle Pool, Olive Reeves (no marker) and Eleanor Bashaw (no marker) are buried in the Pool lot.  Philip Albert Poole and Jessica VanGilder are nearby.