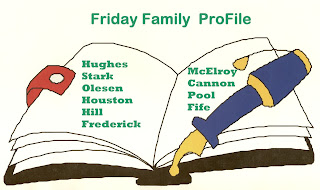 Eleanor Poole also Eleanor Pool, daughter of Sampson Frum Pool and Sarah Louise Harner, was born in October 1, 1886. She was the youngest in a family of eight children and grew up on the Frum farm north of Morgantown, West Virginia in the Morgan District.  Eleanor, also known as Nell and Nellie, is my paternal great grand aunt.

Two months shy of her twenty sixth birthday, on August 23, 1912, Eleanor married Leon Hamilton Bashaw, at Morgantown, Monongalia County, Ohio.  She was the third wife in a series of four for Leon.  Leon, son of Lunsford H. Bashaw and Lucretia M. Pettit, was born on December 18, 1871 at Irondale, Jefferson County, Ohio.

Leon worked a variety of jobs before he married Nell--house painter, carpenter are among them as he moved between Ohio and West Virginia.  From his first two marriages, he had four children--two with each wife.  It appears that the first marriage ended in the death of his wife and the second in divorce.

Children of Leon Hamilton Bashaw and Jennie F.Cunningham:
Children of Leon Hamilton Bashaw and Theressa Lenore Shriver:
Soon after her marriage to Leon, the couple moved to Oklahoma, where their first child, a daughter was born.  Olive Pettit Bashaw was born on June 2, 1914 at Oklahoma City, Oklahoma.  Her middle name is the maiden name of her paternal great grandmother and her first name taken from her maternal aunt, Olive Pool.
﻿
﻿
The Bashaw's second child, a son, was born in Charleroi, Washington County, Pennsylvania.  Leon Poole Bashaw and was born on January 24, 1917.  Since the family was living on a farm in Columbiana County, Ohio at the time of Poole's birth, I wonder if he was born at his maternal aunt's (Sarah Ann Pool Pinyerd) Maternity Hospital in North Charleroi, Pennsylvania.

The 1920 Ohio Census lists the family as living in Knox County, Columbiana County, Ohio and Leon is employed as a newspaper collector.
﻿
﻿
﻿
Sometime between 1920 and 1927, Nell and Leon divorced and she moved with her two children to Pittsburgh, Allegheny County, Pennsylvania.  Eleanor worked in Pittsburgh and her sister, Olive Pool Reeves, took care of them.  The 1930 Pennsylvania census shows young Olive and Poole Bashaw living on the North Side of Pittsburgh in a boarding house run by their Aunt Olive. 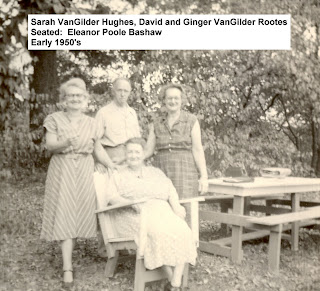 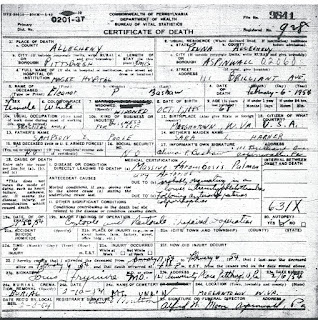 Eleanor Poole Bashaw, age sixty-eight, died at Magee Hospital, Pittsburgh, Allegheny County, Pennsylvania on February 6, 1954.  Nell was employed as a practical nurse.  She was living at 111 Brilliant Avenue in Aspinwall along with her daughter, Olive P. Bashaw and her sister, Olive Poole Reeves.
Eleanor was buried on  February 10, 1954 alongside her parents and sisters in Morgantown, West Virginia in Mount Union Cemetery.
I was told by a family member that Olive Poole Reeves paid for the burial of her sister, Eleanor Poole Reeves aka Nell, and that Olive Bashaw paid her back for the expenses of the funeral.