Sign of the Times Then and Now--Mary L. Leech Taylor Moon 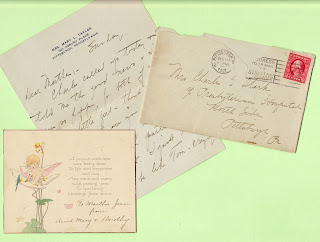 Years back, while going through numerous pieces of ephemera from my maternal grandmother's estate, I happened up a letter written at the birth of my mother in December 1921.  Why my grandmother would have saved this letter from Mary L. Taylor is unknown. Although she signed it "Aunt Mary", I do not believe that she is a relation.  My mother told me that when she was young the term "Auntie" was reserved for friends of her mother and "Aunt" was a blood relation.  I don't believe this was the case with Mary, although Mary refers to herself as "Aunt".

Looking through the 1920 Pennsylvania census report, I found that she was a widow, living at the address in the letterhead with her daughter, Dorothy and her mother, Sophia Leech.  Mary ass employed as a stenographer and was undoubtedly a friend of my grandmother's through work.  My grandmother, Martha Frederick Stark, worked as a stenographer until she married in 1914.
I have numerous old photographs of  my Grandmother Stark aka Teek, as a young woman with a group of "gal pals".  Chances are that Mary Leech is in one of those pictures. 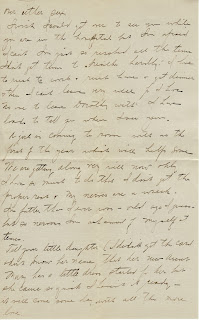 My primary reason for sharing this letter is Mary's story on the second page.....the date is different, but times have not changed since 1921 for many single working mothers.

Transcription of the letter:

Charles called up today and told me the good news and I am so happy for both of you--a dear little girl--think of it--I'm crazy to see you both.  Way down in my heart I wished a girl for you--I'm partial to them you know.  I just knew Charles would be like Tom--crazy over either sex.

I wish I could get over to see you while you are in the hospital but I'm afraid I can't  I'm just so rushed all the time I don't get the time to breath hardly.  I have to rush to work and rush home and get dinner then I can't leave very well for I have no one to leave Dorothy with.  I have loads to tell you when I see you.

A girl is coming to room with us the first of the year which will help some.  We are getting along very well now only I have so much to do that I don't get the proper rest and my nerves are a wreck.  I'm fatter than I ever was--old age I guess--but so nervous I'm ashamed of myself at times.

Tell your little daughter (I didn't get the card and don't know her name) that her new Aunt Mary has a little dress started for her but she came so quick I haven't it ready--it will come some day with all the more love.

Hoping you both get along fine--that I will see you soon with oodles of love from Dorothy and me.

I am
As ever
Mary

I was able to do a census check for Mary; however since Pennsylvania seems very slow in posting marriage and death records on line, I was only able to check the census.  Ancestry has no family charts for this family.

Mary L. Leech, born in Pennsylvania (probably in Pittsburgh) in 1885 was the daughter of Charles W. Leech and his wife Sophia.  Mary married Thomas Taylor about 1914 and they had one child, Dorothy Taylor about 1916.  Thomas was deceased by 1920.
The 1930 Pennsylvania census revealed that Mary remarried.  Her second husband, Harry Edward Moon, born on January 19, 1888 in Baltimore, Maryland was a salesman.  The family was still living at 1501 Asbury Place in Pittsburgh, Pennsylvania.

I did check my grandmother's papers and records.  There was no listing of a Mary attending my the wedding of my grandparents or the funeral of Grandfather Stark's funeral in 1945. 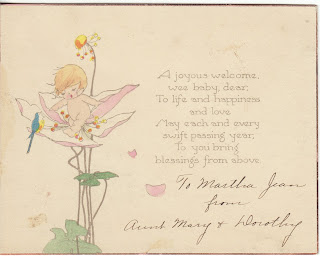 My grandmother chose to preserve the letter and baby card from her friend Mary Taylor.  I wonder if they saw each other often or shared telephone conversations throughout their married years.  Did Teek attend Mary's second wedding--send a card and a gift?  Or was she a friend from work who she was close to and then fell out of touch as the years wore on. I will probably never know.