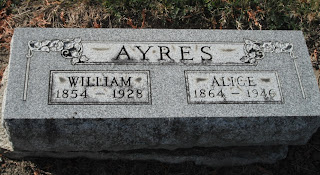 Alice R. Lepard, daughter of Isacc Lepard and Sarah Woollet, was born on July 23, 1863 in Attica, Seneca County, Ohio. Alice is my second cousin twice removed.
I first found the Lepard family when I was searching for my maternal great grandfather, Alfred Frederick in the 1860 Ohio Federal Census.  He was living with Isaac and Sarah Lepard.  I had no idea who they were; however, with a little detective work, I found that my great grandfather was Sarah's first cousin through the Frederick line.

On April 20, 1890, Alice married William H. Ayres in Seneca County, Ohio.  William, son of David Ayres and Mary Hall, was born in Plymouth, Ohio in September, 1854.  There is a discrepancy on William's birth between the 1900 Ohio census and the death certificate as to the month.

The Ayres had one child, a son, James, born in April, 1892 in Ohio, probably Attica, Seneca County, Ohio.  William was the owner of a furniture store in Attica. 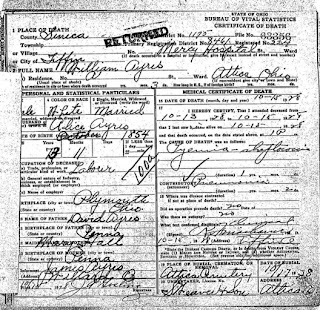 Alice married Emanuel M. Kaufman; a second marriage for both.  Emmanuel was the son of Daniel and Elizabeth Kaufman and was born in Crawford County, Ohio on December 2, 1856.  Emanuel predeceased Alice on April 13, 1931 at Attica, Seneca County, Ohio.  He is buried in Attica Cemetery beside his first wife. 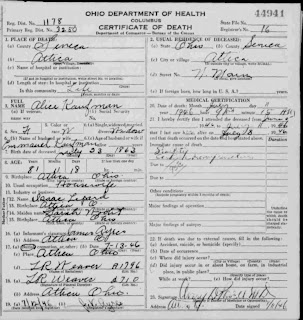 Alice died on July 11, 1946 at age seventy-four.  She is buried beside her first husband, William H. Ayres in Attica Cemetery.  She spent her entire life in Attica.