Carnival of Genealogy, 67th Edition "Nobody's Fool" The topic for the next edition of the Carnival of Genealogy Destination: Austin Family will be: "Nobody's Fool" – who in your family was known to have the best common sense, the best sage advice and basically just “kept it together” all the time?
This topic has given me the opportunity to blog about one of my family heroes. I never knew my paternal great grandmother, Jessie VanGilder; however I have heard the stories and have concluded from my research that she was a woman of great courage and determination.
I did know one of her daughters, my paternal Grandmother Hughes, (aka Grams), one of the most loving, gracious and yet resilient individuals it has been my honor to know. These traits were not instinctive; she learned them from her mother.
Jessica Pool was born on a farm outside of Morgantown, West Virginia on October 17, 1870, the daughter of Sampson Frum Pool and Sarah Louise Harner1. The family was deeply rooted in the area from all branches back into the late 1790’s. Large family gatherings were the norm and many prominent citizens were relations. 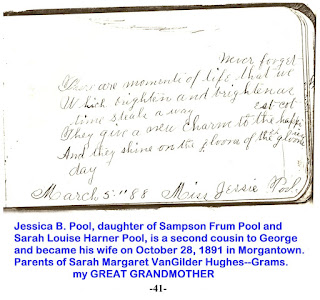 Jessie Pool met her future husband, George Ethelbert VanGilder, in school….he was her teacher and second cousin2. There was a nine year difference between them and when they married on October 28, 1891 Jessie’s father said, “He is so much older than you. He will die and leave you with a bunch of kids.”3
George VanGilder was a good provider. He had various business interests in Morgantown, West Virginia and was an elected official.4 The VanGilder’s had four girls, Mary Louise, Estelle Anna, Sarah Margaret (my paternal grandmother) and Jessica Virginia. Several months following the birth of their fourth child, in 1904, George was stricken with a fatal kidney disease5 and Jessie’s fathers prophesy came true. Jessie was living in a large home with a servant when George died6. There was no life insurance. Her parents were aged. She was suddenly faced with the challenge of four young girls to raise and no source of income.
Fortunately, Great Grandmother was a “pull yourself up by the bootstrap” kind of woman7. Using the resources taught to her by her mother, she was able to earn a living by cooking and keeping house. She opened her home to West Virginia University students as a boarding house. The four little girls helped their mother with the cooking, cleaning and dishes when they were not in school. Jessie stayed in the Morgantown area for about 6 years running boarding houses8. She began with students and moved into the Sabraton area to board coal, tin and oil workers.
Jessie strictly enforced reading as an evening activity for her daughters and they all received a good public school education.
In  1911 or 1912, Jessie decided to make a move from her hometown to Woodlawn, Pennsylvania in Beaver County9. A new Jones & Laughlin steel plant had been built and there was good opportunity for her to continue her boarding house and cooking operation on the Ohio River. Jessie ran a boarding house and had a separate restaurant in the town. The girls were getting older. One married a steel worker and by 1916, the other three were able to get jobs in various companies as secretaries.

Jessie had fostered independence and self reliance in her girls. She always stressed that they were ladies, first. Gloves and hats were a must for certain occasions and hankies! She was a mother that told her daughters to consider each circumstance in life with great thought and to make the best of each situation, even those that were not going in the right direction. She did not like quitters.

My Great Grandmother continued to work as her daughters moved on with their lives. During about 1915-1920 she lived in various riverboat towns on the Monongahela River. In some, she put down roots and did her cooking and in some, she just had a room and used it as her base of operation as a cook on various steamboats. Tracing Great Grandmother VanGilder’s Life on the Mon is a blog dedicated to her time on the Monongahela River.
Between about 1921 to 1931 she was the stewardess on two known riverboats, LaBelle and Carbon traveling the Ohio and Allegheny Rivers.    A blog covering this time on Flipside is found at Mrs. Van Stewardess on Steamboats.
The family was tight, even as each daughter married and moved to different cities. Jessie visited them frequently and the girls were “best friends” into adulthood. By the mid 1930’s or early 40’s, Jessie stopped working and lived with her youngest daughter’s  family in Akron, Ohio until her death in 194910. 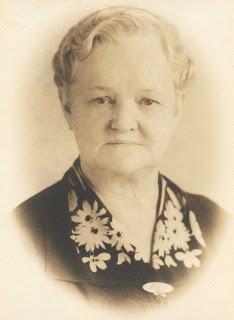 Jessie was nobody’s fool. A morally and spiritually strong woman, she held her family together under the worst of circumstances and endowed each of her children with life lessons that they carried on into their own families.

My aunt remembers her as a warm, outgoing and friendly individual, but was also strict and would not tolerate any insubordination11.” My father told me that Jessie’s response to personal tragedy was to sigh and say, “It must be God’s will” and then go on with her business12. Another grandchild of Jessie’s related a story to me about wanting to pay her grandmother back some money she owed and Jessie wouldn’t hear of it13.

Those lessons continue to move down the generations, from my grandmother, to my father, to me and on to my own children. Little did Jessie know she would be influencing family members into the 21 century….wouldn’t that give her a smile.